Alabama 3: A Universal Connection In The Dark 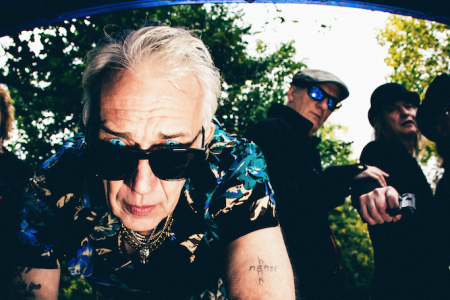 Alabama 3 have bounced back after two of the most difficult years of their 25 year career. The loss of founding member, Jake Black, AKA The Very Reverend D. Wayne Love in 2019 followed by the subsequent pandemic in 2020 meant that it was an emotionally draining few years for the band. As a result it meant they have delivered one of their most conscientious albums to date.

‘Step 13’ features songs that tackle a range of difficult and current topics, something the band has never shied away from during their career. “Politics is everywhere, our job as a musician is to stir things up. One has to take on these topics” Rob AKA Larry Love begins, as he reflects upon one particular song on the record, Yolanda. “We as white musicians need to see the systematic racism that’s going on in our industry. Alabama 3 could not exist without our dubious thieving or reappropriation of black music. Writing Yolanda was a way for me to address the fact that I’ve been a part of that establishment as a white musician for years. The killing of George Floyd and the subsequent BLM protests around the globe must of energised every musician who had ever had ever had the privilege to hang out in beautiful multi culture. As a musician, you can’t ignore that, you have to be a part of the template for change.”

The pandemic helped to shape the record and gain perspective on some of the issues the band discussed. One song in particular, Somebody, Somewhere led the band to pay tribute to the NHS in their own unique way. “I love the line in David Bowie’s ‘5 Years’, ‘I never thought I’d need so many people’. Without wanting to sound like a bore, this song is to do with the NHS and all the people in the caring professions, all those people who put themselves on the front line. In some ways it’s the most important track, its themes of alienation and subsequent deliverance into the arms of a loved one inform the rest of the LP.” says Rob.

Despite all of these issue that were going on in the world around them it was their own grief and sense of loss which ultimately dominated the writing process of the album. “I quickly realised that the more Covid took hold, the more in tune it was with ‘Step 13’.” Rob reflects, “Basically we were dealing, quite up front, about mortality. I felt like from a lyrical angle, I had to be conscious that I wasn’t being too morbid and self pitying about Jake’s departure, no matter how much it was hurting me. At the same time I didn’t want to do the Madonna approach and say we’re all in this together about Covid. So it was getting that balance right so that when we came out the other side it wasn’t a load of self indulgent tripe. As the pandemic unfolded it tied in with those songs about Jake so it did have a universal theme throughout the album. Our loss, hopefully translates to more of a universal loss worldwide because everyone has missed someone. It was a very cathartic process.”

As cathartic as it was for the remaining members of the band, it was also difficult as they listened back to half written songs Jake had recorded. “We had several songs recorded with Jake’s vocals on already so we were able to use some of those vocal takes from those unfinished tracks and fit them in to new tracks on this album so he is there, he’s all over this record” says Orlando. One of the most difficult songs for the band to write was Night Tripper In The Trap House; “It starts off with this drug-induced ‘I’m having a good time’ vibe, then descends into this devious world where one of the protagonists overdoses and the other goes with him to the hospital.” Rob begins, before delving deeper into Jake’s influence on the track. “That was one of the most emotional but liberating songs to write. One of the last things he said was ‘Don’t cry for me when I’m dying, ring the bell three times, I’m coming home’. What better lyric could a man give you on his death bed, what a gift! Jake would have wanted me to write that, he wouldn’t have wanted me to be feared of addressing his dubious behaviour.” The Brixton band didn’t turn off their creative instinct even as they sat at their friends hospital bed. “At the end you hear the life support machines. He was dying in my arms, and the symphony that the life-support machines were making was amazing – his heart machine, the one for his lungs… I said to Orlando, ‘Record that on your phone!’ He recorded it for about five minutes as the machines were turning themselves off, down to the baseline of his last heartbeat, and as you can hear, it works beautifully in the key of G!”

As Orlando said, Jake is all over this record. The remaining members of Alabama 3 have found a way to honour their friend once again, just like they did on tour not long after Jake had passed. “The gigs we did for Jake – we did four big gigs – was perhaps the thing we are most proud of” Orlando reflects. “Our problem was how were we going to address the absence of Jake? So we made a statue of him, a big white figure. Nick Reynolds cast his face from his actual body and made a beautiful head for him, he looked so real. We pulled out all the stops for a light show, we had animations of Jake sprouting wings and flying off to heaven. It really came together, they were really intense and emotional gigs, especially the ones in Manchester and Glasgow. I was really proud that we’d managed to represent it properly and give him a good send off.” Orlando concludes as Rob nods his head in agreement.

The pandemic assisted the band in connecting with the world, finding that common ground, the universal loss but as with many musicians it hindered their writing and recording process. “It was brutal, we were supposed to go on a residential together and we were looking for a studio we could bunker down in and live happily together in a yellow submarine and then suddenly we’re stuck in various parts of the country with half written songs. So we said lets just chuck ideas at each other so everyone was chucking ideas at each other quite violently online.” Rob jokes “I didn’t find it a particularly nice process, I had to write all the lyrics and they were just dithering around on their instruments!” He adds, with a laugh “I’m just a housewife these days, that’s what you have to be if you work in the music industry, I’m enjoying being a housewife.”

Despite the rocky couple of years that the band has experienced, they have stayed true to their unrivalled sound. When reflecting on the longevity of their career, Orlando says it was a surprise it lasted so long whilst Rob was always confident that things would work out and that the style of music would have the legs to outrun their peers. “When I joined the band, they’d been going a few of years at that point, and I thought it’d be an interesting couple of years with them.” Orlando says with a wry smile. “We could have been seen as a bit of a novelty act with maybe one hit song. They’d raid the fancy dress box, get the joke and then move on. A flash in the pan, novelty act. It’s been a surprise it’s lasted so long but Larry is very dogged, he doesn’t give up, he’d like us to be successful but at the same time he doesn’t really care. It’s as exciting to him to play to a room of 20 people as it is to play 5000 at Glastonbury. As long as he’s getting attention he’s happy! We’ve been through lots of high’s and lots of lows.”

“I’m sure Orlando will concur, I’m one of the most arrogant and narcissistic lead singers on the block.” Rob continues. “I was sure, that an idea that would cause such offence amongst brit-pop fans – country and western crossed with techno – and that commitment to the idea would stand the test of time. Alabama 3 was built for longevity because we built ourselves on the foundations of serious art forms like country and blues. I think overtime people realised we weren’t just a novelty act because we were so committed to the facade of idiocy, we set up a smoke screen to develop that. The art forms we built ourselves on – blues, gospel, country – lend themselves to a longer trajectory.” It was these serious art forms that Rob and Orlando grew up listening to and ultimately took influence from. “I inherited my parents record collection in the 60’s and 70’s so there was Pink Floyd, The Beatles and a lot of Rock n Roll stuff like Jerry Lee Lewis, Elvis, and Eddie Cochran was a particular favourite of my mum’s.” It was when he began to learn the piano that he really begun to explore the Blues; “I got into that later when I started learning the piano as I had an Uncle that was a very good Blues pianist so he played me a lot of different artists such as Professor Long Hair and Dr John. A particular influence on my playing was Ray Manzarek because I got very into The Doors.”

Rob on the other hand had a very unusual upbringing as he came from a family of Mormons. “Unlike Orlando’s bohemian background I was not allowed to listen to anything other than what was sung in the choir until I started smuggling in Black Sabbath records when I was about 11.” Rob laughs, “My family were all Mormons, my mum sang in the mormon chapel so I was subjected to basically the American Gospel Songbook. From that I found there was music closely related, so I found the Blues. I realised that there were other art forms derived from gospel that were dealing with devilry so I quickly found that at the crossroads you could go to church and you could go to the bar. That revelation was interesting.” He adds, “I got into Acid House so that defines me, Acid House and Mormon Tabernacle Choir.”

As the band reflects on the highs and lows of the past 25 years and prepares for the release of ’13 Steps’, they also look ahead to what the future might hold for them. “There’s talk of a documentary that looks like it might have some legs.” Rob contemplates, “There’s a Sopranos film which is coming out in September and a video for Yolanda – it’s a zombie apocalypse video which is quite fitting. Other than that, we’re waiting to see if we can tour, in the meantime I’m going to be a housewife!”