Ashley Monroe: A change in direction 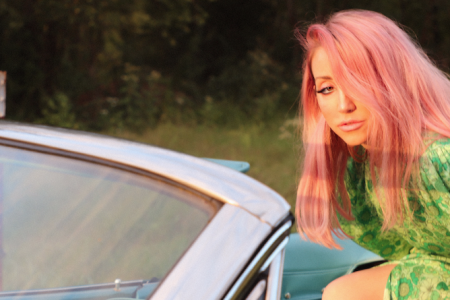 Ashley Monroe’s latest album Rosegold is a drastic departure from the pedal steel’s and strings of ‘The Blade’ and ‘Sparrow’ but what inspired this change?

Ashley Monroe is widely known within country music for her sweet vocals, detailed, story-telling lyrics and perhaps most notable of all, her captivating melodies. For the most part, that hasn’t changed but fans will be surprised by the shift in sonic direction that ‘Rosegold’ takes. Gone are the days of pedal steel and strings, instead we hear synths and effects playing a big role in the production. Fans will also notice another change too, the sombre, sometimes heart breaking stories Monroe was so good at telling, are replaced with much more joyous themes. So what’s inspired this change?

So much of the heartbreak that Monroe has been able to channel in her songwriting previously, stems from the devastating loss she suffered at just 13 years old. Monroe, who had a close knit family, suffered heartbreak when her father died of cancer. “When he was sick, thats when I wrote my first song. I released all those feelings I had through songwriting.” For a while she honed in on these deep seated feelings of love and loss. Her 2018 record ‘Sparrow’ brought much of those feelings and emotions to a head and her personal stories helped many fans who had suffered similar devastation. “I knew God gave me a gift and felt a desire to use it” Monroe said.

However, the birth of Monroe’s son, changed her outlook on life and kickstarted the feelings and emotions that ‘Rosegold’ would centre around. “I feel like I’ve always tried to write and release what I feel, so a lot of the time that’s been heartbreak songs – there’s not been too many happy songs” Monroe begins, “when my son was born I felt this wave of love wash over me and I felt more confident as a person. Being a mum makes you realise how strong you are and how cool your body is. As an artist, I started when I was 15 and I’m now 35, and it gave me time to reflect on everything I’ve done and I’m proud” Monroe says. “I’m really protective of my joy because I haven’t felt joy like this before; this fire of love, I’ve not felt that since my Dad died.” Now Monroe had a different story to tell. Like a phoenix rising from the ashes, Monroe had a different emotion that needed to be channeled through her songwriting. “I still feel like I have a gift and I have things to share. My heart opened up all the way and I would hear these melodies with the words and I would hear the production to it.”

Shortly after the release of ‘Sparrow’ Monroe and record label Warner Brothers parted ways. ‘Rosegold’ is her first release with Thirty Tigers. Monroe began seeking out the music that gave her goose bumps, the music that captured the new found happiness she felt in her personal life which she wanted to preserve. “At the time I was listening to Kanye West and The Beach Boys and I would really dive into those parts that gave me chills on my arm, whether that was the melodies or the way the bass dropped in and out. I was listening to a really cool new artist called Dominic Fike as well. All these songs were making me so happy!” Monroe enthused. “I didn’t want to watch any murder mysteries or anything like that. I’m not in denial that there’s things that are bleak and sad for a lot of people, there’s still a lot of pain in the world but I feel like my job was to hone in on the joyous feelings behind these angelic melodies, the delays and synths. It had to take people outside of their pain. It takes me outside of my own pain and misery too” Monroe said of the new direction her sound has taken, adding, “I didn’t want it to be country because thats not how I heard it. I say it’s not country, I’m from Knoxville Tennessee, country is in my voice – it’ll never go away but I didn’t want the production to have a twang.”

Monroe has always had an eclectic taste in music. From her christian roots, the songs she sang in church right through to the southern rock and country her parents played to her. “They played everything from Lynyrd Skynyrd to The Eagles to Bonnie Raitt” Monroe recalls, “We had country tapes like Trisha Yearwood and Reba, I also went through a phase where I would only listen to 50’s music. On long car journeys I remember Diamond Rio would come on and John Michael Montgomery How Was I To Know.” Monroe laughs as she thinks of her own choices “I was obsessed with Elvis from a really young age so I had that on a lot. I had his name tattooed on my hip and ‘Love Me Tender’ tattooed on my shoulder just in case he’s still alive and he’s going to come looking for me haha!” She continues to enthusiastically reminisce the soundtrack of her childhood, “We also listened to Celine Dion and Mariah Carey, I used to listen to her tape on my way to my clogging lessons when I was a little girl. I’d try to follow the vocal riffs and I loved Whitney Houston. I listened to every genre including rap – my brother always listened to rap music. We probably shouldn’t have been listening to all the cussing but we’d sneak off and listen on the way to church! I was ten the first time I sang in church, I was a shy little girl but I loved to sing and play piano from being about three years old.”

For ‘Rosegold’ Monroe sought to work with both old friends she hadn’t written with in a while as well as some new collaborators. “I mean it when I say I loved working with every one of them” she says with an excitement to her voice. “Mikey Reaves did Siren, Groove and Drive, he’s just a cool guy, an ace songwriter, he’s just got a vibe” she begins to talk through her co-writers. The vibe of this record is what sets it apart from anything else out there today and what sets it apart from her previous work. “Everyone I went to with these production ideas was so good at capturing it” she says, “Nathan Chapman and I have been friends for a long time, we used to write together when he was just starting doing Taylor’s demos. There was a chunk of time that went by, people stop writing and talking for a long time for no reason, life just kinda happens. I saw his name on my calendar and was excited to work with him again and we wrote Gold together, just the two of us. He had such a clear vision for the sound and he helped me achieve what I wanted to with that.”

Despite the sound not being sonically true to country traditions, Monroe worked with a lot of the hitmakers from the genre, the likes of Jordan Reynolds who she wrote silk with has written such country hits as Tequila and Speechless for Dan and Shay. Similarly, Monroe worked with Brett James whose hits include Kenny Chesney’s Out Last Night and Carrie Underwood’s Jesus Take The Wheel. “The New Me I wrote with Brett James, Brett was the one who kinda discovered me and got me my first record deal, he’s another I hadn’t seen in years and years. Tyler Cain produced it, Tyler and I wrote Has Anybody Ever Told You off The Blade. When I first moved to town at 15, then out of my mamas at 18, I moved to Sterling court out by Belmont University. I didn’t go to college but I had a lot of friends who did, so I lived a college lifestyle without actually learning anything – well I learnt stuff but not college stuff! Anyway, Tyler and I go back that far, he’s like a brother to me.” Monroe speaks so highly of her collaborators and they of her.

As Monroe gears up to release this album, there would usually be a tour in the diary to accompany such a project but of course it’s hard to plan anything these days. “I have no shows booked yet but I guess that will happen soon” she ponders before reflecting on live music and performances in the past. “I am out of my body when I’m on stage, I can get distracted for sure but when it’s going right I’m in the zone, its like I open my eyes afterwards and I’m amazed.” Monroe says of the magic of live music. “I was doing a solo show at Bush Hall one time, I was playing piano on Orphan and I’ve of course played piano before but its different live, its like when someone presses the record button and you suddenly forget how to play!” She laughs. “I was mid song, I was lost in it and I just heard a scream and then I heard someone say that someone has fainted and in my mind I was thinking do I stop or do I keep going? Thats the most I’ve ever thought about something on stage and I decided to keep going because I hadn’t missed any notes on the piano and I thought if I start over I have to worry about getting it right all over again.” She chuckles “but the person was fine! I try not to think, I’m in the zone, lost in the words of the song until I hit a wrong note on the guitar then I get mad at myself for a minute until I bounce back.”

Whatever the future holds for Monroe, with this latest release she feels the most contented she’s ever been. The new direction her sound has taken reflects the new direction her personal life has taken. This adventurous record has allowed Monroe to showcase her versatility as an artist and songwriter and has got me excited and intrigued by where she goes from here!