Behind the song: Aaron Raitiere 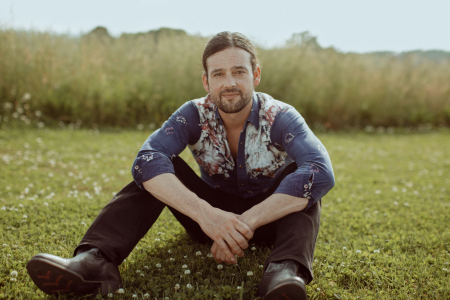 Aaron Raitiere joins me from his house in Nashville, he has a day off from touring with Anderson East and sits down to talk about his debut album, ‘Single Wide Dreamer’, produced by East and Miranda Lambert. However, Raitiere has been around for a long time, writing hits for our favourite artists. We must have spoke for nearly an hour and the thing that strikes me about Raitiere is his laid back approach to life. He has had a lot of success with his songwriting career over the last few years, he shrugs it all off, “You stand in the middle of the road long enough you’re gonna get hit by a car and I’ve been standing in the road for 17 years.”

He laughs as he talks of how he fell into music. “My parents got divorced when I was 13, my dad had a lot of guitars and I just wanted to kick his ass at it. I think it was just that teen angst. I remember going over to his house and watching filthy TV, playing guitar, eating pizza and pickles because you can’t do any of that at mum’s house! I painted fences in summer for $5 an hour. That’s when I learned about work and how most people in the world are doing bullshit hard jobs. Then I got paid one night to play my guitar for $100. I would have been painting fences and mowing lawns for two weeks! Plus girls like guys with guitars and I didn’t want to work.”

Raitiere had a way with words and carved a successful career out of crafting them but for all his success, the Kentucky native has had his fair share of trials along the way that have helped inspire his songwriting. As he steps out from the writers room and shares his first collection of songs under his own name, he records his own version of a song he wrote that Miranda Lambert cut back in 2016, ‘For The Birds’. “My house burned down like five years ago, that’s where the story starts,” Raitiere begins to reflect on the making of that song. “I got woke up as I thought I heard a crackling noise. I had a roommate at the time, but he wasn’t in town, but I thought maybe he left the record player on. When I opened my bedroom door, the house exploded, pretty much. The fire came in the windows and I ran outside in my underwear. It was three o’clock in the morning and super quiet, there was 40 foot flames coming out of the top of the house just hitting the houses around.”

Raitiere called upon his good friend Anderson East to help him out. “Anderson was getting ready to leave on tour, he was going to go open for Sturgill Simpson. So I hit the road with him for two months, because I didn’t have anywhere to go. When I came back I went to live with my friend and fellow songwriter John, he lives in this trailer. He’s a prolific songwriter and writes songs all day, 24 hours a day which is amazing but annoying when you’re living with him. We did these 30 minute contests where we’d set a timer and write a song within 30 minutes so you’re forced to go with your gut. I went through this phase of buying bird feeders, so this one write I was watching the birds, I had about 16 bird feeders on the front yard with all different kinds of seeds in, like a farmers market for birds. So we hit the timer and I wrote ‘For The Birds’. I took it to Miranda Lambert and she wound up cutting it.”

Raitiere’s interpretation is the lead single from the record which he worked on with East and Miranda Lambert, but it took many years for the final product to come into fruition. “I’ve known Anderson for 20 years and he’s been saying he’ll make a record on me for 20 years. We lived in a house that had a studio downstairs for four years together, and still never recorded anything or even wrote a song together. We would just go camping and drink beers and hang out when we had time. There was a split second in the world where Anderson and Miranda were spending a lot of time together and I was playing a lot of music with both of them. They both wanted to make a record on me and said they’d handle everything.”

It was recorded in stages with Raitiere sending over 100 songs for Lambert and East to narrow down. “We cut half the record and then they got busy and four years went by and we cut the other half of the record. We made it so I would have something to take to songwriting festivals. We have all these Magical guests on the record like Bob Weir and Robert Randolph and Foy Vance. I write for Dave Cobb, and he’s this big super producer or whatever and he’s downstairs working with all these important musicians. Anderson and I share an office upstairs, all of our mics were set up and we’d say if you get bored, you gotta come upstairs and throw a guitar down or sing a harmony.”

Dave Cobb has been instrumental in Raitiere’s career and it was him who invited the songwriter along to the sessions for the film ‘A Star Is Born’. Raitiere had three songs featured in the film, including one of the promotional singles, ‘I’ll Never Love Again’. “Dave Cobb was producing that soundtrack and he called me up on Friday and he’s like do you want to write with Lady Gaga, I said sure when and he’s like now. Can you get on a plane tomorrow? I couldn’t until Sunday but I flew out to LA  for a week and we wrote three songs all in the same day that all ended up in the movie.”

Whether he’s writing for himself or for another artist, Raitiere says it’s all about getting the best song out that day. That being said, his mindset does shift depending on the purpose. “If I’m going in to write for another artist, I’m just trying to figure out what’s on their mind and what’s in their heart. I think if you’re writing for yourself, it’s just the difference in telling your own story and telling someone else’s story. The hardest part about writing songs for other people is learning to just shut up and listen. I’m thinking about getting a tattoo that just says stop talking,” he laughs.

Though he’s stepping into the spotlight, Raitiere reflects on some of his most precious songs written for other artists. “There’s a song I wrote with my friend Jason ‘Rowdy’ Cope who passed away but he was in a band called The Steel Woods, the song is called ‘The Rock That Says My Name’. I wrote with him about this guy that works in a graveyard and just already has his own grave picked out and his tombstones are already there. Every day he tips his hat to his own gravestone, and then one day he’s dead. And he’s like, when you go by there, just tip your hat to the rock that says my name. I find it ironic now.”

But perhaps his proudest moment is introducing his mum to his songwriting world. “My mum’s been a nurse for 40 years and she’s just retired but we wrote a song together called ‘Love, Light and Healing’ and the Oak Ridge Boys recorded it. They played it on the Grand Ole Opry and they were trying to get these $20 royalty checks to her so as a result my mum just signed her first writers deal!”

As he continues to tour Raitiere shares that it is not just music that gets his creative juices flowing but he is an avid painter as well. “I’ve been painting a bunch. I just sold this four foot by four foot painting for like, 1000s of dollars. I’m going to live in the woods with a good dog and a good garden, probably by myself, I’m thinking real hard about the hermit thing. I think that sounds really nice,” he laughs as he contemplates his future. For now though, Raitiere is gearing up to hit the road and is looking ahead to his next record.