Behind the Song: Bill Anderson on ‘Once A Day’ 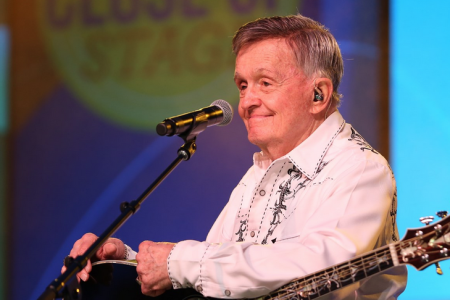 Bill Anderson is a living Legend in Country Music. Not only for his hit records and hosting of the Grand Ole Opry, but also for his songwriting. “Once a Day” was a song written by Anderson and recorded by Connie Smith as her debut single. Maverick Country caught up with Bill to ask him about the writing of this hit.

Where did the idea for the song “Once a Day” originate from?

I was driving into Nashville and was stuck in the traffic. I stopped the car and wrote one verse and chorus on the side of the road.

Who did you have in mind when you wrote it?

I never wrote a song with any specific artist in mind, even for myself.

How did Connie get a hold of the song?

She originally cut is as a demo and she wasn’t on anybody’s radar yet.

Where was it recorded?

At RCA Studio B here in Nashville back in 1964.

“Once a Day” was recently inducted into the National Recording Registry of the Library of Congress. How does that feel?

There aren’t a lot of country songs in there and I am just thrilled. It is an amazing thing!

Besides yourself and Connie Smith who has recorded “Once a Day” over the years?

I really don’t know, but I know it’s been an awful lot of them. Back in the 60’s a lot of artists would hear a song and do their own version of it. George Jones heard it and said, “I believe I can sing that.” But it has been sung by so many artists in Country and Pop and done so well, but Connie’s version is the one they are keeping in the Library Congress. A lot of people have done it really well, but no one has done it better than Connie.

Do you feel that “Once a Day” helped define the Connie Smith sound as it came to be known?

Oh, it definitely did and there were three members of my band who played on that record. Including Weldon Myrick (Country pedal steel player) who was playing with me and created that very famous introduction to the record. They were part of my Poor Boys band. I think it helped give the album a unique sound because these were not the same musicians that you were hearing on everybody else’s record back in those days. It made the record stand out next to her tremendous vocals.

When “Once a Day” came out were you more focused on your songwriting or solo music career at that time?

No, I was already into my solo career and had a #1 with ‘Still’ – it was song of the year in 1963 and crossed over and was a big hit, Pop song too. I was fairly well established as an artist, but some the songs I was writing weren’t like the style I was recording.

As a songwriter how do you make the distinction between what you are going to keep for yourself as an artist and record or let the song go to another artist to be recorded?

Well it was hard at various times during my career, but it kind of came to the point ‘does this really fit me, am I recording right away, or will it be six months before I can get in the studio?’ There were a few songs in my career that I wrote, and I figured nobody could do them but me, because they were so personal, autobiographical and stylistic for me. But most of the time I wrote a song and just hoped it would find a home somewhere.

How does it feel when you are hosting the Grand Ole Opry and an artist performs a song that you wrote or co-wrote?

(laughs loudly) Oh, very humble it really does – It’s always an honour. I think sometimes people think “Bill only gave that person a nice introduction because they were going to sing one of his songs.” (laughs) And that has nothing to do with it at all. I try treat everybody as fairly as I can and treat them like I would like to be treated. It’s very special to step back and hear Steve Wariner, Vince Gill, Connie Smith or anyone of these great artists do one of my songs. It never gets old.

In July of this year Bill Anderson celebrated his 60th year on the Opry. He continues to write songs, record albums and host the Grand Ole Opry every week!