Behind the song: Till I Gain Control with Rodney Crowell 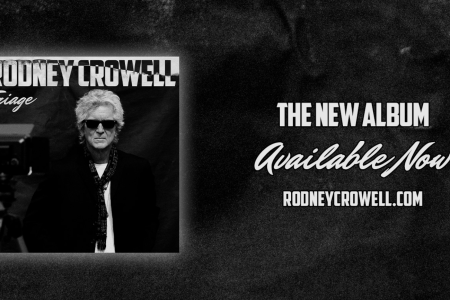 Song: Till I Gain Control

‘Till I Gain Control’ topped the country charts in 1983, becoming Crystal Gayle’s 10th number one. However the song had been on quite the journey before that point having been written seven years prior by Rodney Crowell. By the time 83 rolled round Crowell had several songs that had charted, including the crossover hit ‘Shame On The Moon’ which Bob Seger and the Silver Bullet Band took to number one on the Adult Contemporary charts in both the US and Canada as well as charting in several different countries. Life couldn’t be more different for the songwriter than when he originally wrote the track.

“I was in an area of Nashville called Hillsboro village. I was 23 and at that particular time I was part of a group, I was the youngest and least experienced participant in this group of songwriters that was spearheaded by Guy Clark, Townes Van Zandt and Mickey Newbury. Steve Earle came on that scene a little bit after me, around the same time. We were a group of Texas based songwriters, although it wasn’t by design, it just happened that way.” Crowell says as he sets the scene. He looked up to and was inspired by his peers, “I was paying real close attention to the work that Mickey Newbury was doing and Guy Clark was very generous and shared his experience with me. I needed to write something to maintain my place in the community.” The pressure was on for Crowell as he surrounded himself with the best of the best, writers who were hard to please.

Crowell worked hard on perfecting his songs writing day after day and being critical of his own work. ‘Till I Gain Control’ didn’t come to him as most of his songs do though, “As if in a dream, I started writing ‘Till I Gain Control Again’ I don’t remember starting, I just remember finishing it.” He says, “I can still see the room in this small apartment that I had when it came together. The beginning, middle and near to the end was pretty much a dream state writing that song.” His peers were impressed when he took it to them, “Townes Van Zandt, who had never really given a nod to anything I’d written at that moment, he kind of nodded his head and said, Okay. And guy Clark said, Okay, we’re getting somewhere and Emmylou Harris, recorded it the moment she heard it.”

“My goal with that song was to keep my seat in that group of songwriters, I can’t just be a part of this and not contribute something to it. I mean to glorify it or romanticise it, it was like that in the early 70s in Nashville, that was like our Paris in the 20s. When you share your work and not for the money, not for the glory, but for the feeling that you are finding your way to create on a level that’s going to sustain you for a long time.” Emmylou Harris recorded the song in 1975 and put it on her ‘Elite Hotel’ album, it was never written intentionally for Harris but Crowell was delighted she wanted to record it. “I never have anyone in mind when I write a song. A lot of people have recorded my songs, but I have never successfully written a song for someone else to sing. It was really a breakthrough moment for me as a songwriter. Interestingly, you know, it seems to have a life of its own. I suppose I wrote that song, but it might be more like it wrote me, it came to me and said, Look, you want to do this, this is what you do. My relationship with that song remains as mystical today as it was, all of those years ago when it came to me.”

It was recorded and performed by so many in the years following, from Crystal Gayle to Waylon Jennings, Van Morrison to Blue Rodeo and even This Mortal Coil. Crowell recorded it himself in 1981 and he has fond memories of singing it on stage with Willie Nelson. “A couple of years later, I’m at a honky tonk in North Hollywood, California, and Willie Nelson is on stage. He says, I’m going to play a Rodney Crowell song, and it’s ‘Till I Gain Control Again’, and he invites me up. I didn’t know this was going to happen. He knew I was in the audience, he invited me up and on the way up to sing harmony with Willie, I remember thinking, I’m being knighted by one of the masters here. I think I’ve chosen the right path for myself. A lot of people tell me, that’s their favourite song of mine and who am I to argue?” He smiles.

Despite the many versions of this song, with varying degrees of success, it’s the original recorded by Emmylou Harris that remains Crowell’s favourite. “Out of loyalty and love, I would have to go with Emmylou because she started it. The song is very prayer like, I always thought that song’s a prayer if you listen to it closely, especially her version.” As more hits ensued over his illustrious career he never deviated from his formula that made this song a success, hard work, practice and most of all being led by the song. “All the success I’ve had as a songwriter is when I wrote the song specifically for what the song was telling me it needed to be. I always say, if I’m patient enough, the song will tell me what it needs to be.”