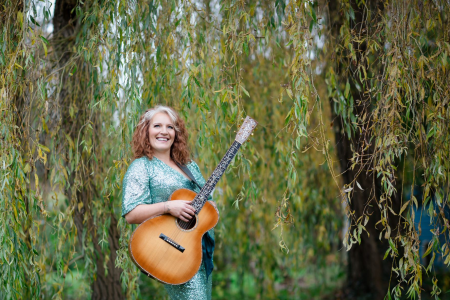 I was always wheeled out at school as the one who ‘might’ sing when all the others wouldn’t.  But it was while doing a drama degree at Uni that I got to sing live with a band for the first time and I remember thinking- this is it!

What kind of music did you grow up listening to?

Parallel Lines by Blondie was the first album I bought. However, if I think of the soundtrack to my life, Dolly has been there every step of the way – Her greatest hits cassette got jammed in the tape machine of my first car – it was all I could play for years and that was fine with me.

What are your experiences of the U.K. country scene like? How has where you grew up influenced your music?

It’s great watching the Country/Americana scene grow here – all of the great festivals like Black Deer and The Long Road Fest and all of the fantastic radio shows that are gathering momentum all of the time – it’s a lovely community.  Although I never set out to be a Country artist as such – it’s the storytelling I love. I grew up in the East End of London surrounded by amazing characters and I write about them a lot. So I am very much Country with a London twist – but when you are writing about the human spirit – that’s universal.

How does the songwriting process work for you, do you like to start with lyrics first or a melody or is it different every time?

I’m Lyrics first every time, I know lots of writers who aren’t but, with me it all starts with the seed of an idea or a person I meet or remember or something somebody said that I can’t forget. I can write a whole story on sheets and sheets of paper before I even pick the guitar up.

Can you tell me the story behind your song ‘A Bird Sings In Nashville’?

I went out to Nashville a few years ago to record an EP and while I was there I was lucky enough to do a songwriting camp with Gretchen Peters – we had to take something new back to the group for feedback and I had a morning to come up with something. I had nothing! I just couldn’t get started or stick on anything and the clock was ticking. I went and sat on the porch where I was staying, it was pouring with rain and I was totally stuck  -  then the rain stopped and a bird in a nearby tree started to sing, I couldn’t see her but her song was so clear and strong it was like she was saying – what’s the problem lady? Just do it like this!

Your plans changed slightly when recording this album, can you tell me about that?

My last EP, An Idiots Guide to Love was recorded in Nashville, produced by the brilliant (Grammy Award Winning ) Bob Britt, and I had planned to work with Bob again but then Covid struck, and like everyone I had to change plans. I couldn’t go out there, so I needed to find someone here to take it on – I had heard some songs that had been produced by Lukas (Drinkwater) and I loved them so I gave him a call. Lukas is a very clever fella, he plays lots of the instruments on the album. A reviewer described him as a ‘singer’s dream’ and I think that’s true, he knows exactly how to capture a vocal, he is also loads of fun, we laughed a lot and ate cream cakes – it was a lovely experience

Peas – it’s called Peas – it’s really about the time a young lad tried it on with me at a party. There is a connection – honest!

When you’re on stage are you completely focused or do you let your mind wander – what’s your mid-gig thoughts?

Ha – well  – my favourite gigs are the ones where I am totally in the moment – I love those ones – where everything just feels easy and it’s all about connecting with people in the audience and sharing something together, but I must admit, towards the end of a gig I do sometimes find myself thinking how much I would love a cup of tea.

I’ve got a launch show at The Bedford in Balham on 31st of March and I am excited for that. Lukas is coming to play bass with my band, Jack Bowden is supporting me and I have some fantastic young artists coming to start off the night – it’s one of my favourite London venues and I can’t wait to play the album there. I am also touring as one third of The ARC Songwriter Series alongside the fantastic My Girl The River and Kate Ellis. We have dates over the year throughout the UK and how lovely it will be to share songs and stories with such great artists.