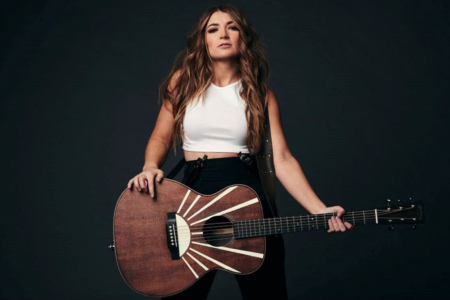 Canada has always produced talented country stars from Shania Twain to Terri Clark but there’s a new kid on the block, Tenille Townes, that’s been making strides within the scene as her compelling story telling lyrics truly tug on the heart strings of anyone who hears them. Currently residing in Nashville when she’s not touring the world, Townes reflects upon her experiences growing up in Canada after recently winning three Canadian Country Music Awards.

“It still seems so surreal to get to celebrate music at home and to feel the community that I grew up with, wrapping their arms around this path.” Townes begins, “It means the world to me. I’m so grateful to have got my start there and to be able to call Canada home. I grew up very much surrounded by country music and the stories. That’s the beautiful thing about country, I think it just sort of has this universal truth. I grew up singing along to the little yellow radio in my dad’s garage, or we’d drive around in the motorhome with my grandparents across the wide open spaces of Alberta’s plains into the Rocky Mountains, on our summer field trips, listening to Patsy Cline and Dolly Parton.”

Townes’ unique voice helped her to clinch the Female Artist of the Year title whilst her evocative songwriting helped her to take home the Songwriter of the Year award. Songs like Somebody’s Daughter and Jersey on the Wall would bring a tear to the eye of even the hardest of hearts. “Getting to hear a story about someone who’s lost someone too soon and how painful that is and to just be able to kind of talk about that for a minute, that always means the world to me and I will never ever take that for granted. When I play the songs I think about the stories that people have told me and the names of the people. I try to completely be enveloped in the emotion of that every time I sing it because I want anybody who’s out there who just needs to feel that emotion to be able to feel it. It can be hard on my heart to be wrapped up in that moment but it’s such an honour to get to stand there, sing that and think about the people who have left us too soon. So I carry that with me every time.”

Townes has spent the last few months during the pandemic, working on new music and has approached songwriting differently. “I love to be the storyteller, I always will. However, there’s something about this past year that has challenged me and I think the songs are coming out a lot more personal.” Townes says. Talking about the collection of songs she’s gearing up to release she adds, “There’s a group of songs on there that definitely were created with the mindset of me missing live shows and missing playing with my band. There’s a lot of really joyful songs. Then there’s also some songs that were just written from a very lost and lonely place in my own heart. And I hope that people feel comforted when they hear those.”

“Being able to write songs, even across the distance on zoom has been what’s kept me sane during this pandemic.” Townes continues, “It does not replace the in person, I am so excited be getting back to a little bit more of that. It doesn’t replace it but it made me feel like, the song will find a way one way or another, into the world.” Speaking of the new single of this new chapter which she co-wrote with David Pramik and Steph Jones, she said “I’ve been walking around my neighbourhood a lot, this past year; there’s something therapeutic about just putting one foot in front of the other and being outside. I’ve been hearing kids laughing in the backyard and was looking at different sidewalk chalk art, and something about that just made me feel reminiscent of childhood. And I’ve been spending a lot of time working on myself and thinking about where our confidence comes from, and how the most confident version of ourselves was that fearless kid who just believed that anything was possible. I think I could use more of that confidence in my life right now.”

For her last album, Townes spent time decorating her guitar to represent each song on the record. “A few years ago, when we were working on the lemonade stand in the studio, my dad came to visit and we walked through the Country Music Hall of Fame. We were looking at all of the remarkable instruments that they have in that place, and all the stories that these guitars have told, if only they could talk! For this record, we’ve got the sunrise painted on it, and on each of the rays, you’re gonna get different lyrics. So I’ve got the ones on there for Girl Who Didn’t Care and I’ve got my pen ready, just about to commit to the next song.”

Townes continues to win the hearts of country fans across the world and continues to make her home country of Canada proud with each song she writes.