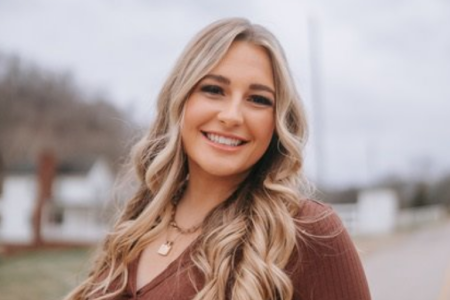 Erin Kinsey impressed at Country 2 Country Festival as she performed on the Spotlight stage in the main arena on the Friday night. It wasn’t the first trip to the UK that the Texas native had made but with a new EP now under her belt as well as that incredible performance, I was keen to catch up with Kinsey and find out more about her journey in music so far.

I tried every sport, every club you can imagine, my parents are really big on me and my younger sister trying to figure out what we wanted to do as early as possible. So we could just sprint towards it. I tried just about everything but I either had zero passion, or in most cases, zero talent. Music was the only thing for me, I started taking piano lessons when I was really young, but I got a guitar when I was around 11 or 12 and really started leaning into it then. I just couldn’t get enough, I wanted to learn every song I heard and eventually started writing my own.

What kind of music did your parents play to you on long car journey’s and what are you choosing to listen to now?

My mum had a lot of Christian music in the car, she appreciates me telling it! Then my dad played a lot of country music, and all my friends had pop music playing. So I was surrounded by a whole bunch of different things. Now I really only listen to country music, I listen to a lot of the new stuff coming out because a lot of them are my friends or I know people that wrote it. It’s really exciting being in a place like Nashville, I’ve lived there long enough that I feel like I know people behind the songs coming out. You have another emotional attachment to it. But I grew up on everything and I feel like that’s reflected in my music now. Being 13 years old, you’re like a sponge, taking things in that you don’t even realise.

Tell me about your experiences growing up in Texas and what the country scene there is like?

I started going to Nashville at a pretty young age, just because I thought, Miranda Lambert, who is somebody I really looked up to, she ended up going to Nashville, so that was always where I wanted to go. But when I was younger, I definitely was into the Texas country scene and played at local places because I couldn’t miss all the school in the world to go to Nashville. I’m definitely proud of being from Texas. When you move states, you have to get your licence plate changed. I just had my plates changed, in the last couple months, and I moved in 2018. All I cared about was that on my plates, I wanted it to say Texas. But you know, I’ve sucked it up and decided to not get in trouble with the law. But I could go get a Texas sticker and put it on the back of my car, that way people know. Texas is so much more to me than just home, it’s my family, it’s where I grew up, it’s where I started chasing this dream. I don’t know if I would be just as passionate if I was from somewhere else or not but I’m proud to be from Texas.

Tell me about your songwriting process, do you like to start from a particular point or is it different every time?

It’s always a little bit different just because I co-write a lot. I can kind of bend whatever way we need to go for the other people in the room. Lyrically, in the last few years, I started really trying to be as true to myself as I could be. I started out so young. I think in high school, you’re trying to be what you think people want you to be. So that whole sentiment definitely mirrored into my music. I was writing songs, I thought people wanted to hear, what they wanted me to write, and in the last couple of years, I started really, just trying to figure out what I wanted to say. The only thing I really know about being 21 is what I’ve been through. So I’m just trying to get as personal as possible. It’s been crazy how the more personal my songs get, the more I feel that they relate to other people.

Can you tell me about your latest single ‘Just Drive’?

It’s my first song that’s gone to radio which is crazy, that’s the dream! Every detail of it is true – in the chorus it talks about a white Toyota, I have a white foreigner, and it’s the only car I’ve ever driven since I was 16. It talks about speeding a little in Texas, and in Texas, there’s a joke that the speed limit’s a suggestion, somewhere around there. When I was learning how to drive, I was told you can go ten over and you won’t get in trouble. Anyway, it talks about Highway 40 and I live off I40. So it’s a really personal song to me, the first verse is based off the story of me and my boyfriend in high school, we were going to some nice restaurant for Valentine’s Day or something like that and I just was having fun with him in the car on the way. I remember thinking man, I wish it was just a little bit farther away, because we’re having so much fun. I had no plans to put this song out, I thought it was too personal, but I posted it online and learnt so many girls have white, Toyota’s, so many girls drive faster than they should. It was really cool to see people from all across the world relating to these little details.

I did write a song once about getting married in Vegas. It was just about, loving somebody so much that it makes you put away your caution and let your guard down and be like, I love you so much, we’re gonna get married in Vegas tomorrow. So that’s probably the strangest concept but I’ve also written songs that sound like it’s about my boyfriend but is probably about my dog or my best friend or sister or whatever.

You came over to play C2C, what was your favourite thing about the UK?

I just like hearing everybody talk. I know it’s the same language but y’all sound so smart! The architecture is just beautiful as well, like all the buildings are just absolutely stunning.