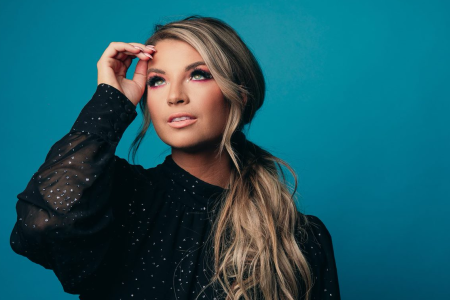 Jess Moskaluke has enjoyed performing in the UK this year. She performed at C2C earlier in the year and was back again in August performing at The Long Road followed by The British Country Music Festival in September. We enjoyed having a chat to her about the scene in Canada and her career so far.

I guess, in the middle of when it was all happening, at least in terms of doing it professionally. I started singing when I was about 15 years old and just really loved it, just the same way that anybody starts anything – hockey, volleyball, basketball, any hobby. I just really loved it. It became a bigger and bigger part of my life. I didn’t really realise that’s what I would be chasing as a career. It was just something that I was doing as much as I could because I was passionate about it. Before I knew it, it became my full time job. It was all I had time for and it was all I wanted to do.

Can you tell me a bit about the Canadian country scene?

I kind of started in the Canadian country scene, probably when I was about 19 or 20. But when I was growing up as a fan, the Canadian country music scene was heavy into the females. We had artists like Michelle Wright and Shania Twain and Terri Clark and Patricia Conroy. They were huge, successful women in the country scene that really led the way. So I was just a huge fan of all of those women.

What did your parents play to you on long car journeys?

When I was growing up, it was, of course, country, that was all that we had access to when it came to radio stations. I’m from a really small town – there’s maybe 2000 people. But we don’t have a radio station in town, we have a few surrounding cities that we could tune into if we got close enough, and all of those radio stations were country. So I very much grew up listening to country and it’s still what I listen to now but I like to dabble in everything and the way that country is going, country music dabbles in everything; there’s country pop, there’s country rock, and rap and trap. There’s all these different avenues of country music these days and I think that’s what makes it so special.

When it comes to your own songwriting where do you draw inspiration from lyrically?

Personal stuff, things that I have lived through mostly. But sometimes it can come from a movie, if there’s a situation that you see that you think, well that will make a cool song or maybe it’s other music, maybe it’s a lyric, maybe it’s just a thought or a book. It can come from absolutely anywhere. I have a note in my phone that I just constantly keep titles and lyric ideas.

Can you tell me a little bit about how ‘The Demos’ came together?

That record has a really interesting story of how it came together, because it almost didn’t come to be. At that time, we were planning to release just singles to radio and then the pandemic hit. We had exhausted the few singles that we did have already and we thought, well, now what do we do? I can’t get to the studio, they are closed, I can’t be in the same room as musicians, it’s going to be really challenging to put together any kind of music. So I dug back into the demos of songs that I had already written, that we hadn’t released. A lot of these songs were almost on another record and for whatever reason, they didn’t make it but it wasn’t because they weren’t a strong enough song, it was that maybe there was a song with a similar title out at radio at that time. Or maybe, we had too many slow songs on that specific record. So they just never quite made the cut. I hated that they’re just sitting on the shelf right now. So we decided to take the actual demo as it existed and put a few of them on the record. We decided to add remotely a few different instruments to fix up a few things. So I wasn’t able to get into the studio but we were able to, from a distance, collaborate and fix those songs up into what we thought they could be if they were to be on the radio today. So it’s a unique concept and it was a challenging album to make and it wouldn’t have happened if it weren’t for the pandemic. So I am, in some ways, thankful for that tiny little silver lining.

Well, the UK trip is coming up. Here in Canada, it’s summer festival season, being that our weather is so cold so often, summer festival season is a really busy time for us, because it’s every single weekend, we’re playing multiple different shows and I’m releasing brand new music in July.