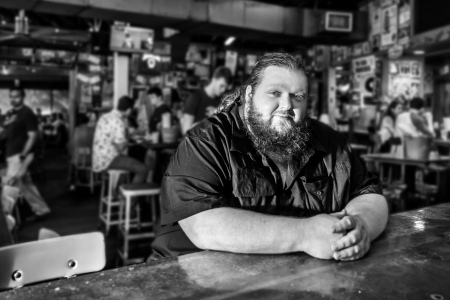 Matt Andersen is a prolific Blues guitarist but his latest record ‘House to House’ has a much more Americana feel to it. It’s a stripped back record that really allows Andersen’s vocals and guitar skills to shine. “This album, for me, was about singing simple songs, not trying to do the big notes or anything like that. That’s what I grew up on,” he says of his decision. “For the most part, I tour solo, a lot of people have never seen me with anything more than just my guitar. So it’s pretty natural for me to go back to that, I just haven’t for a long time.”

Though he embraces the sparce, simpler production, he loses none of the power he has become famed for. “Songs that are as much about the space as they are about what happens between the spaces. I’ve learned those moments need to be there in a show. Big and strong isn’t big and strong if you don’t have a quiet moment to compare it to. This album is pretty much all about those types of songs.”

Andersen came from a musical family and was always destined to pursue that path himself, “There was a lot of music in my family growing up, it was just something we did, my grandfather played, my mum played, lots of cousins played. It was never a conscious decision to be a musician. It was just more of a thing you did whenever the family got together.”

Andersen grew up in New Brunswick in Canada and found what he liked and what he disliked from the music his brothers used to play to him. “It was a small town, we had two radio stations – one was country, one was classic rock. My brothers had lots of classic rock records, lots of heavy metal that I never ever got into but one of my brothers always had country music playing. Eric Clapton was one artist I got into early on. Then my folks had lots of classic country and my grandfather played traditional fiddle music. So I was just a bit of a sponge when I was a kid.”

Andersen immersed himself in the local scene, “I started playing bars around Canada, just playing a guitar and trying to get people’s attention, reach the people at the back of the room. Those gigs were great. Sometimes it was fun to just show up and no pressure other than keeping people drinking.”

With his natural talent and hard work combining it was only a matter of time before he progressed onto the bigger stages and he reflects on one of his most memorable gigs. “We have a venue in Toronto called Massey Hall, the first time I played there under my own name, I sold it out just me and a guitar. My parents flew in for that one, it was a monumental moment.”

He’s travelled all over the world playing his music to many different audiences and he laughs as he shares his first impressions of the English, “The audience just doesn’t react the way they do in North America. In Canada and the US, you play a solo and people dig it, there’s applause right away. I had to get used to people tapping their feet in England and that was them loving it! It was just a more intense listening experience.”

The highlight on this intimate record, Andersen’s 9th studio album comes in the form of the poignant, love-infused ‘Let Me Hold You’, Andersen picks up the story, “I wrote that with a friend of mine, Dave Gunning, it was a couple of albums ago, but it just didn’t fit for the album I was making at the time. I just hung on to the tune for a year or so. Dave is one of my favourite writers. We’ll have supper with his family, then go write a song together. He already had the idea of somebody who’s in one of those relationships you have to work at, I guess that’s where it all came from.”

Andersen’s record is so different from his previous but it speaks directly to the heart and has such an authentic sound to it. He effortlessly delves into gospel-infused folk, introspective singer/songwriter numbers and thoughtful ballads, showing a more intimate side of the performer and writer. With it’s stripped back nature, it reflects the quiet, slightly lonely time we all experienced during the pandemic, when Andersen recorded the album. With its simple yet effective delivery it should be easy for Andersen to take this record on tour and that’s exactly what he plans to do.