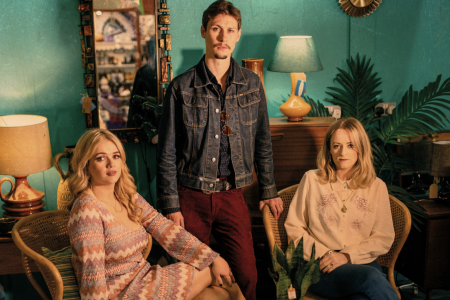 When you met and played together for the first time, did you know you had something special?

When we first sang three-part harmony together it felt natural and that definitely made it feel more special. If it’s just two of us singing together for example and the third person joins in it always feels great. Even now a few years after we started out and we’re messing around with an idea or a song we want to cover, and we all sing together we’ll just pick up on a harmony spontaneously.

What influences did you each bring to the band?

Initially we all bonded over an interest in country music, primarily from the 60s and 70s including Emmylou Harris, Johnny Cash and Townes Van Zandt but together we have an eclectic range of influences. For instance, Radiohead, The Cure, Fairport Convention, Elton John and Fleetwood Mac. Naturally some of the elements of these other genres seep into our music.

How does the songwriting process work for you guys?

Usually, one of us will start with an idea and bring it to the rest of the band but it varies. Individually our song writing process varies also, where Rob and Karen for example might start with a chord progression and scat lyrics over it. Naomi can be more inclined to start with lyrics and work on a melody/chord progression, but we don’t always follow the same process.

Can you tell me the story behind the song ‘Before Midnight’?

Initially we all had one song written for the band to kick start the whole project and this was Rob’s candidate. Lyrically it’s essentially a retelling of a film by Richard Linklater, one of the ‘Before Trilogy’, but it’s actually the story of ‘Before Sunset’ so bit a mix up there, though ‘Before Midnight’ was a nod to ‘After Midnight’ by J.J Cale. It was nice that in the song each one of us sings a little bit of lead vocals.

Tell me your experiences in the UK country and Americana scene?

Since we started playing together in 2018 we’ve played some really cool festivals and shows and since then we’ve found we’re more aligned towards the Americana scene. We’ve always found that the range of music at the Americana events tends to be more diverse, original, and authentic. We feel like a lot of the music in the modern UK country scene derives from a different style of country music than we’re influenced by, but the audiences have always been really supportive of us.

We’ve had some really fun gigs recently. A few weeks ago we supported the Hanging Stars, a London based AMA UK associated band in the beautiful St Michael’s Church in Liverpool. We also really enjoyed playing at the Cavern recently for the BCMA monthly Country night sharing the bill with Ashley Campbell, but we’ve got some exciting gigs coming up as well that we’re looking forward to.

How excited are you to play the British Country Music Festival?

We’re really looking forward to it as it’s one of the biggest festivals we’ll have played to date and the line-up looks really good! There’s always a great network of support at the country events also so we’re looking forward to growing our fan-base and meeting some new people.

What does country music mean to you?

It means something different to all of us really. We definitely share an interest in the older, traditional Country music but we’re each influenced by new emerging and current artists as well. Gillian Welsch, First Aid Kit, Caroline Spence, Brandi Carlile and the Cowboy Junkies to name but a few keep us interested in the genre without being too stuck in the past!

With regards to what it means to us more personally, we (Karen and Naomi) in particular grew up listening to acts such as Garth Brooks, The Chicks and Dolly Parton as that’s what our parents were listening to, so it’s always been a big part of our lives and a major influence in our writing.

Our debut album If You Were Listening will be released next month on the 15th July! We’ve already shared two singles from the album Perfect Eyes and One More For The Road and we release the next single Brake Lights on Friday 17th June with our debut music video, so we’re really excited to share that.

We’re also having a launch party on the 29th July in Jimmy’s (upstairs) in Liverpool with support from Reid Anderson and tickets are available on our website!