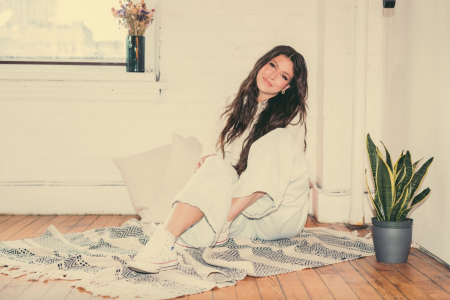 Robyn Ottolini made her UK debut at C2C Festival in March, and what a debut it was! The Warner Music Nashville, up-and-comer, won over a whole new audience on her short trip to the UK and we caught up with her to find out all about her move from Canada to the US and her plans for the future.

I’ve loved singing since I was like three years old. I never did lessons or anything but I was so focused on lyrics I just memorised every song on the radio that’s just how my brain works, I guess. I begged my parents to let me play guitar, because I’d already played piano so I got it when I was 14, from then on, I was writing my own songs because it made me happy, but I didn’t realise you could do this as a career until I was older. When I was 20, I was like, screw it let’s go for it.

So when you were growing up, what kind of music did your parents play to you?

I was raised on 90s country music so like Shania Twain, Martina McBride, lots of women, which was great. Nowadays, I still listen to country music, I love Sam Hunt and Kacey Musgraves, Maren Morris – people who really speak their mind in their lyrics. I also like pop music, people like Lennon Stella.

Can you tell me a little bit about the Canadian country scene?

When I got signed, I had two EPs out and one of my songs went viral during the pandemic after I posted it on Tik Tok. So I got signed to a label in the states, Warner Music Nashville, and it’s funny because everyone in Canada was like, Wait, who are you? Because I’ve been playing shows there but when you play shows, you’re the cover band. So when they heard my actual music, America was like, oh, let’s grab her and Canada’s like, where did you come from? Now, I’m more in the American scene and I’m trying to get my foot in there because, it’s hard being a foreigner. But Canada has embraced me with open arms and I’ve been playing the festivals, Boots and Hearts and opening up for Shania Twain this year. It’s gone from like, zero to 100 really fast.

When it comes to your own songwriting, do you always start with like a lyric idea or a melody or is it different every time?

It’s different every time but I have to say nowadays, I have to write things down and then come back to them. So when someone says something, and I think, that’s a cool idea, then I’ll write it down. Then I’ll come into like a writing session and say, here’s a title idea and here’s like a melody that can go with it, then we can go from there.

Who are your favourite people to collaborate with?

I’m new, so I’m still meeting people down in Nashville. But I really love Nicole Galyon, and Jimmy Robbins.

Can you tell me about your first radio single?

So my first one is F 150 and I released it in 2021. It went to number seven in Canada, it billboard charted at 59 in America, so that was crazy for me, because I was a nobody and then I had like a top 10 single. So it was absolutely crazy. It was exciting because the production is very different than what you hear normally, on country radio, you’ll hear like a very large chorus and then go down in the verses. But we did the opposite with the song so I was really happy to see the love that it got.

How excited were you to play in the UK at C2C?

I’ve been working on my accent. My dad’s parents are from the UK and my mum’s, dad is from the UK. So I got some roots here and it’s exciting to finally get to see it. I grew up on Coronation Street!