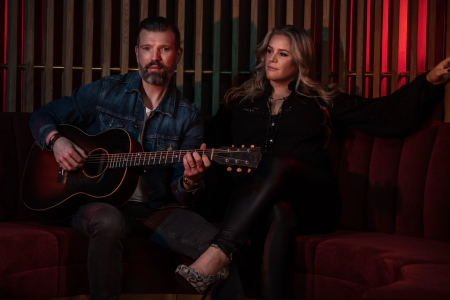 Before you both met, did you always play music?

Karin: We actually met on a tour back in 96. Göran was the guitarist and I was singing back up vocals. We were both hired to work with an African/Swedish artist touring in Uganda, Before that we both had similar musical journeys. Göran was born into a musical family. His father played bass in a Swedish folk band and there was always guitars available around the house. Göran picked up his first guitar around the age of 3 and have never put it down since. I started music at the age of 2 when I decided to use a wooden box as a stage at a market in Paris. I must have put on quite the show, because I’m told I drew a crowd and got paid with candy! Göran grew up playing in various bands from his early teenage years and I toured with a gospel choir in both Europe and the US. I moved to Stockholm when I was 20 and that’s when we met. Our first 5 years together we played in a soul band and toured the country in Göran’s dad’s old chevy van it was a whole lot of fun but not so lucrative since the van drank tons of gas and our pay was close to nothing!

What were your influences growing up? What are you choosing to listen to now?

Göran: Karin listened a lot to Aretha Franklin and Steve Wonder and was very influenced by the whole Motown scene while I grew up listening to everything from Beatles to Kiss. I think soul and blues has been the foundation of what we’ve listened to but also the traditional Swedish folk music. I think its important to allow yourself to be influenced by what ever moves you and not always listen to the same genre! As a songwriter, having a broader spectrum has proven to be one of our biggest strengths, since we now are writing anything from 70’s classic rock, country, soul, instrumental, blues and kids music!

Which artists from your home country have influenced your music?

Karin: An artist who made it ‘big’ here in Sweden appeared to be a superstar even if the music never reached outside our small country. Carola is a Swedish artist that pretty much made it over night when she won the only music competition there was at the time. She was only 16 and being a 10 year old girl dreaming about being a singer I wallpapered my room with Carola posters! Years later we worked together on several tours and shows. It’s kind of interesting how the circle closes like that. I also feel obligated to mention Abba. I think its impossible to be a Swedish songwriter and not acknowledge the impact of the melodic language that group delivered. I think its in our DNA weather we admit it or not. But there are also other artist that has shaped and influenced us growing up. Marie Bergman, Eva Dahlgrén, Eagle Eye Cherry, Titiyo, Lisa Nilsson to mention a few.

Göran: We have this phenomenon here in Sweden called ‘dance bands’ . They play for hours and people dance in pairs when they play. The golden era was the 1970s and at one point there were around 800 full-time working dance bands in Sweden. They would throw in the occasional country song in their sets. A lot of times the lyrics where translated to Swedish and the bpm adjusted to fit the dancers. To be completely honest it sounded kind of cheesy and gave country music a bad reputation here in Sweden. But over the last 10 years the plattform for both country and Americana music have grown bigger.  I think we can thank tv – shows like Nashville and the Swedish tv show Jills Veranda, (filmed in Nashville) for introducing both country, country music history and Americana music to the broader audience and for paving a way for a whole new generation of country music in Sweden. Also, I think the similarities between Swedish folk music and traditional country is not as big as one may first think. If you go to a picking party in Nashville or a ‘spelmanstämma’ in Sweden you will not hear the same tunes but the instrumentation and vibe is very similar!

You say Nashville is like your second home, what do you like so much about music city?

Karin: We both identify home as a place where you have friends and family, where you feel safe and loved and where creativity flows. Nashville is just that. We more or less got adopted in to a group of friends as soon as we arrived and the community in East Nashville where we always stay is so strong, generous and open so it didn’t take long until we knew our neighbours, our son had a place in the soccer team and our daughter made a bunch of friends too.

How does the song writing process work for you guys? Where do you start?

Göran: Usually one of us have an idea and we sit down and take it from there. We both write down ideas or as Karin calls it ‘collect stories’ and then we talk a lot about who the story is about. It may be a fictitious person or someone we met, read about, or it can be about us. Once we know who we are writing about or what we want to say it usually falls in to place pretty fast.

Can you tell me the story behind your song ‘Some People’?

We wanted to write a positive song, a reflection of life and all the ups and downs, highs and low’s and also bring in the perspective of what is important at different stages of life. What you look for in a partner when you’re 20 or 50 may differ. When you have been together as long as we have (25 years) it’s inevitable not to shape each other and we truly believe we make each other better and that’s what this song is about.

Ha ha – not sure if it qualifies as strange but we have actually written a few children songs and there is one called ‘Ants in my pants’ and another one called ‘Freddy the dragon’ they are both kind of fun and unexpected. But there is also a lyric about a woman who’s the ‘Queen of chaos’ and that is a slightly different lyric.

This summer we are doing quite a few shows here in Sweden but in September we return to Nashville for a few months. We have a few things lined up. But hope to book more shows and definitely write some more music!