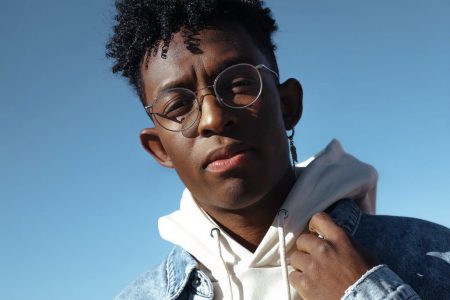 There is no one quite like Breland. The artist, recently named breakthrough artist for Amazon, has reinvented the genre, if not created his own sub-genre which is occupied solely by him. The New Jersey native has exploded onto the scene in the last few years and captured audiences around the world with his energy, enthusiasm and his unprecedented sound. He will be another starlet that is sure to shine at Country 2 Country this year but his journey into music is rather unusual. He joins me one morning, not a cloud in the sky where he is and a big smile upon his face as he enthusiastically tells me about his career so far.

“I think my family knew that they wanted me to be a musician a lot longer than I knew that I wanted to be a musician myself! I was kind of a shy kid.” He laughs. “I feel like growing up, it was always understood, you’re gonna sing, but I just didn’t have my own voice. My older sister’s a great singer, as well.” Breland grew up in a religious household and was only exposed to one kind of music, gospel music. “My parents are both ministers. They lead worship at church and they met in a gospel choir. So music was in the house. My parents exclusively listen to gospel, they don’t know anything that’s happening elsewhere. Even things that everybody knows, they don’t know and that’s what I grew up listening to.”

It was only when he went to boarding school that he really listened and discovered other genres of music. “I was really fascinated initially by genres, because everyone kind of had their own thing that they listen to. I was just discovering all secular music all at once. I’m diving into the Bee Gees over here and then the Beatles over here and then the Backstreet Boys – I promise I listened to groups that don’t start with a B as well,” he laughs. Being exposed to different genres of music all at once allowed him to listen to a little bit of everything and not put his tastes in a box.

It was at this point he knew he wanted to be a musician. “I had a chance to be whoever it was that I wanted to be and I felt inspired to just tell people that I was an artist. I didn’t have any music or anything to support or substantiate that claim, I just thought it would be cool.” His classmates were eager to hear what he had. “There was like a coffeehouse type thing where people could come up and perform or do spoken word or whatever and the pressure was on for me to deliver a song. So I had to write a song and it sucked. It was awful. I went on stage with one of my friends playing keys for me and sang it in front of my classmates and it was a really positive moment where I felt like, maybe I’m not as shy as I thought I was.”

Now it was time to find his own voice. “When I started putting music out myself, a good decade later, I knew that as a songwriter, I appreciate country music, because I think it’s some of the best songwriting and storytelling, but that sonically, I really appreciate things from all the different genres. I knew that for me, if I could find a way to blend that, I felt like people would be able to understand it and receive it.”

Breland began writing for other artists across a range of genres first and he explains how he approaches each one. “I have to first establish what the melody and the vibe of a song should be. So if someone plays chords on a guitar, you could have the same four chords on a guitar be written as a pop song or as an r&b song. Depending on what cadences you do, how you build out the production. So you first have to figure out what type of song is this? I’m not going into any of these rooms with an understanding of who the song is going to be for. I’m just trying to answer the question, what does the song want to be?”

There was one song however, that he knew straight away who should sing it. That song was ‘My Truck’. “That one was interesting, because it was the first song that I ever wrote that I felt should be for me. Because at the time, I was just writing songs for people, I wasn’t putting music out. ‘My Truck’ came out of a challenge of, maybe we can write something that’s kind of like country and trap. As I was writing it, I was like, I don’t think anybody can do this except for me, and I hadn’t really felt that way before. It was such a unique niche that I literally couldn’t think of an artist that would sing it because at this point, even Lil Nas X was going in a different direction. I was like, who occupies this space right now? And it was unoccupied.”

The track that is bursting with personality was released independently at first but began to gain traction on TikTok. “What makes that song special to me, has nothing to do with how successful it has become, or the types of people that it has helped introduce me to, but literally, creatively, it was the first time that I made something that I felt like I could do myself and every song since, if it doesn’t give me that feeling, then I won’t put it out. That’s how I divvy up the songs, these are going to go for pitch and these are going to stay for me.”

Breland teamed up with GRAMMY nominated country artist Sam Hunt for a remix of the track but it’s not the only collaboration he has done since breaking out onto the scene. In fact, he makes quite the habit of it! “I think, for me, if I have creative chemistry with someone, then I’m going to get in a room and make something with them,” he says, conviction in his voice. Breland recently released a song with country king, Keith Urban called ‘Throw It Back’ but it wasn’t their first collaboration and probably won’t be their last. He reflects upon the first time they worked together, “With Keith, he was like, I’ve got one more song on my album and I think you should be on it, and we just created it from scratch. We now have four different songs, we have ‘Out The Cage’ from his project that I’m featured on, ‘Throw It Back’ from my project that he’s featured on, another song from his album called ‘Soul Food’ that we wrote together and then a song that he wrote and I sang the backgrounds for called ‘Crimson Blue’ that was in Nine Perfect Strangers. All four of those songs sound entirely different, you would be shocked if we had demo vocalists, you would not believe that they were even written by the same two people but we have that type of freedom when we’re in a room to be able to create without borders.”

He also collaborated with Dierks Bentley on ‘Beers On Me’. “He came across my name in a magazine or something while he was in the studio recording ‘Beers On Me’ and sent me a text – I just came across your page and I think you’re really dope. I’m recording this song right now, if you want to pull up. So I pulled up, wrote my verse on that, and then it became my first country radio single in the States.” Breland enjoys collaborating with artists across genres, “All of these things came out of curiosity, I wonder what could happen if, and then answering that question with our work.”

Another collaboration Breland was a part of is one that would please his parents. He teamed up with Gary LeVox of the Rascal Flatts for ‘All I See’. “I’ve been able to be a part of a couple of gospel songs including one with Gary LeVox.  I’m sure they would be more excited if I were making gospel music.” However, his parents are proud and supportive of the 26 year old. “I sometimes don’t tell them about all of the songs that I write. Because, I mean, I make r&b and hip hop stuff and they would be really upset if they knew that I was a part of some of those songs. I think for my stuff, which is mostly pretty clean, they definitely understand the creativity behind it. They understand that I am not doing anything to be disrespectful but that I am just someone who likes to create in a lot of different ways. If anything, God gave me that. So I think they have a more nuanced understanding of secular music now and definitely can appreciate what it is that I do.”

At New Year, they had the pleasure of watching their son play to his biggest crowd to date as they attended the Nashville Big Bash. “I would say my proudest moment so far was the Nashville big bash. It was like a CBS special, like a TV special here in the States, the New Year special. There were 115,000 people in the audience in real life. And then it was also being nationally televised. My parents were in town in Nashville for the first time, because the pandemic, they hadn’t felt comfortable traveling. They came down to Nashville for the first time and got to see me do that live in front of my biggest audience by a lot. It was just a really good way to close the chapter on last year, which I felt like was a really good year and has largely lit my fuse for all the things that I’m doing this year.”

With each milestone he achieves, Breland says his mind is blown. Now he looks ahead to C2C and playing to a new audience overseas. As he packs his bags, he reflects on the last time he came to England back in 2019. “I was in such a starving artists period of my life that the fact that I was able to make that trip work was remarkable. I came back and had like, $4, to my name. I probably shouldn’t have even done it but I knew that the next time I was going to come out there, it was going to be under entirely different pretenses.” He adds, “I think fans will get from me a level of energy and engagement that wouldn’t even be possible here in the States because of the level of gratitude that I have for the opportunity.”

When he gets back to the States however, he shall be busy working on new music. “I’m super excited to drop my debut full length album. I think anyone who has liked anything that I’ve done so far, this project is all of those things but with momentum and understanding and growth and perspective. So if you liked any of those songs, I have used the knowledge that I learned from all of those collaborations and put them into this project.”

Breland will be the most unique artist to appear at C2C this year but his enthusiasm and energy is infectious and he is bound to bring the party!