Brett Eldredge: Songs About You 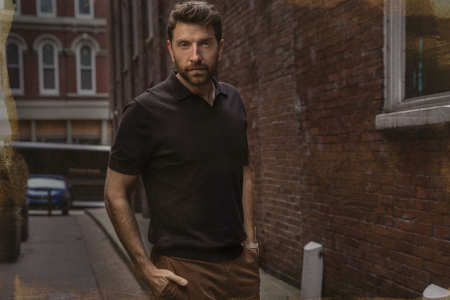 The anticipation built at the O2 Ritz in Manchester. Brett Eldredge was the last gig I went to before lockdown and he was one of the first to return to England when it was safe to do so. His devotion to his UK fans is undeniable. As he stepped out on stage, with a grin on his face, the Manchester crowd went wild and they were in for quite a show as he played a set of fan favourites and treated us to some new songs off his, then, recently announced, seventh studio album, ‘Songs About You’.

For as high energy as his shows are, for as confident as he looks up on stage, it’s a skill Eldredge has had to work hard to perfect. “When I was a kid, I was very nervous,” he reflects. “I loved to sing and I had a huge voice, but I would be really nervous to sing in front of people. I found the confidence through people recognising that I had this voice, and then I started to grow, and eventually stopped staring at the floor and stare out into the crowd,” he laughed.

His latest album is based around reflection and nostalgia and he thinks about his own childhood, “I would sing at church or wherever they would put me on locally. And eventually, I just grew to love it and I knew I got to chase this down somehow. I started going to school for it. Then eventually I moved to Nashville to chase it down and kept grinding away. I started to write songs for a living and then got a recording contract and became a recording artist and a songwriter.”

Eldredge started out in country music writing songs for other artists; one of his first cuts was  ‘I Think I’ve Had Enough’ for Gary Allan. He reflects upon the first song he ever wrote, “I remember writing a song in college, I didn’t know what I was doing at all, I didn’t even know I was writing a song. I think it was called ‘You Made Me Who I Am’, or something like that.” He admits that he’s come a long way since then but it laid the foundations for the successful career he has built. “I remember thinking, this is cool, but I didn’t really understand it. So I moved to Nashville and I saw people get on stage, like at the Bluebird, or, the first place that I played was nowhere near as cool as the Bluebird, it was like a hotel lobby. I saw people playing songs, and I wanted to be able to do that.”

After a successful decade of album cycles and touring Eldredge’s lifestyle came to a screeching halt with the pandemic and the subsequent shutdown of the music industry. What started off as a few weeks break turned into two years of uncertainty and there were times when it took it’s toll on him and his mental health. However, it gave him a chance to focus on his writing and reflect upon the things he missed and that all came to a head on the song ‘Want That Back’, which longs for simpler times.

“I wrote a lot of songs from my upcoming album over the last year and a half and it’s turned out really well,” he begins. The nostalgic number was one of many tracks to come to Eldredge in the middle of the night. “On this album, I tended to get all my ideas in the morning, and in the middle of the night. I’d jot them down as quick as I could. So before 8am, as I’m starting my day, I would come up with the whole chorus. Then I’d be like, Okay, I’ve got a songwriting session today, I’m going to bring this idea in.”

He didn’t write alone, utilising zoom when he couldn’t get out to write and travelling all over the States when it was safe to do so again, chasing after the best songs with his friends. “I’ve been working with several different producers, and several new writers. I’ve gone on trips to Montana, to California to a lot of different places to write these songs.” Open to ideas and aware of his own strengths and weaknesses he teamed up with some of the best in the business and he allowed himself to drop his guard and let them in, “I’m very aware that there are people that are so talented in different areas. But sometimes it’s also good just to sit there and talk to your friends and something pops out. You really get to become your most vulnerable self and bare your soul to the people that you don’t get to see as often as you’d like.”

The bond between songwriters is unique, they build up a trust and understanding and channel their most personal thoughts into their art, forming indescribable connections with each other in doing so. “You tell so much about yourself pretty quick that you learn to get to know another songwriter a lot faster than you would even some of your close friends, because you don’t hold back because you want to write about real things.” As he finds himself reflecting once again, he adds, “It’s pretty amazing how deep you go with these people and what you get from going deep. I always encourage everybody to open up and be able to do that, I think it’s important.”

As well as opening up to his co-writers, Eldridge has been opening up more to the fans as well. As he reflects upon this UK tour he admits that despite his energy and big smile, he sometimes struggles separating his live shows from everything else that’s going on in his life. “Sometimes you carry what’s going on in your personal life on the stage, and you’ve got it in your head,” he says. “Some days you’re really amped. Some days, when you’re out of energy, what I do is, I find somebody in the crowd that is having time of their life, you connect with them, and they give you their energy. Sometimes I’ve got all the energy, and I can just explode everywhere!” he laughs. He feeds off his loyal fans as much as they feed off him. “Sometimes, I reach for that one person, or at least a group of people that I know, have been waiting for this moment, for a long time that it takes me out of my head, the tough spot I’m in or whatever. Because you’re playing tons and tons of shows all the time, and I love to do it but the reality is, it’s never going to be, sunshine and rainbows every time you walk on the stage. But the fact that you get to walk on the stage is a big deal.So I find somebody in the crowd and it sets me free. That’s exactly the therapy that I needed that whole day.”

Those gigs in Europe are some of his most exhilarating as well. “It’s cool to see the energy of the whole band, being able to go somewhere far away from home and to see fans and meet people and experience a new thing that we don’t often get to do,” he gushes. “I think that’s why I love coming over there and seeing everybody, is the passion of the fans.”

Although the songs on this album have been ready for quite some time, Eldridge admits that he likes to slow things down before release. “I try to slow it down as much as I can; travel, see different things, it makes me write better songs and makes me live my life,” he says. “When I go on a European tour for example, I go early, and I stay late. I try to see new things and gather these experiences.” However, he admits that this is the most fun he’s had making a record and he’s excited to hear people’s thoughts.

As he continues the themes of nostalgia and reflection from his album into everyday life. He looks back on his achievements and concludes, “I think right now, being where I am, I think that’s my proudest moment. I’ve been able to take it at the speed I want to take it, not try to live out somebody else’s career, but my career, be my individual self. Learning to be able to say no to things that just don’t serve my soul. To be able to put my heart fully into things that I can really contribute to and love and passionately do,” he says, all the while his smile beams. Eldredge’s openness and honesty has always been something that fans can look up to, admire and latch onto but this record takes that to a new level as he widens the net with his authentic lyricism on ‘Songs About You’.