Callie Twisselman: In Her Idols Footsteps 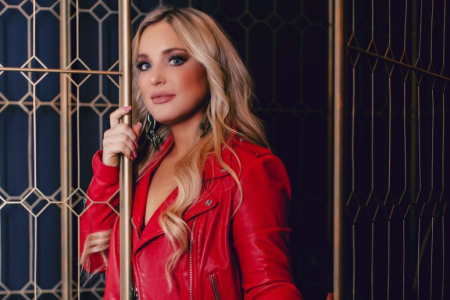 Callie Twisselman was one of the standout performers on the smaller festival stages at Country 2 Country. The California native in her cow-print jacket strutted up and down the Indigo stage, captivating the crowd as she went whilst on the spotlight stage in the main arena, her vocals and lyrics drew the audience in. Twisselman is the full package, a singer, a songwriter, an entertainer and it really feels like this is her year, after C2C finished she headed out to Florida to open for the legendary Dolly Parton at SXSW. Finally, the world is sitting up and listening to what this country girl has to say!

I’ve always said, country music is more than just a genre, it’s a way of life and Callie Twisselman knows that more than anyone. “I grew up on a grain and cattle ranch so I did live the country lifestyle. I write music from my personal experiences, so that definitely did play a part in shaping me as a country artist,” she begins. Living and working on a ranch is hard work and that set her up well for the hard work and determination it would take to make it in the music industry.

She knew from an early age that this was the life she wanted, “I was 10 years old, my mum was a singer, in a local country band. I think that kind of gave me the spark to want to do it myself.” Inspired and encouraged by her family she began to sing locally. “My sister had this idea why don’t you go and sing the national anthem somewhere? So I started singing the national anthem at 10 and opening for different concerts and stuff and ever since then, I knew that’s what I wanted to do.”

Country music surrounded the family and Twisselman soaked it all up, “We always listened to country of course, country music was a big part of my household. My dad listened to it and my mum. But I grew up with some pop, the 80s pop. Now I listen to all kinds of genres, but country is the main one.” Twisselman’s family trekked backwards and forwards to Nashville frequently, helping to nurture her talent in the place the genre called home.

It was in Nashville that Twisselman honed her songwriting craft and learnt to tap in to her own feelings and experiences. “Sometimes I’ll write down a title, or a word I think is really cool and I’ll try to make a song from that or other times I get an idea in my head and I’m like, ‘Okay, I like that idea, now let me just find the melody’. But for the most part, it’s just kind of what comes to me at the time, from what I’m experiencing.”

It was on one of these trips to Nashville that the songstress caught the attention of Danny Nozell, Dolly Parton’s manager. He saw a spark in the young writer and knew she had what it takes to wow country fans the world over. After a year and a half under his guidance, Twisselman signed her first publishing deal. From there she worked on crafting her EP, ‘Closure’ which came out last year. It showcased every side of Twisselman, from her debut single ‘Two Hands’ with it’s pop sensibilities in the melodies to the title track which really allows us to listen to her sweet, smooth vocals. It is clear from this five track collection she has all the makings of a true star, drawing similarities to Carly Pearce’s strong vocal ability, Taylor Swift’s pop-country brand of songwriting and the charm and charisma of one of her main idols, Dolly Parton.

Talking of the secret to her success, as she passes advise down to other aspiring songwriters, Twisselman says, “I would say just keep at it. Good things take time and just put all your hard work into it and it’ll eventually happen.” After winning over fans here in the UK, Twisselman impressed as she opened for Parton in Florida. She is a talent who is just starting out on the road to success but 2022 is her year and her career is bound to blossom in the next 12 months. “I’m in the midst of working on some new music, writing and getting that together for the next record,” she says, a smile spreading across her face as she thinks of how bright the future looks!