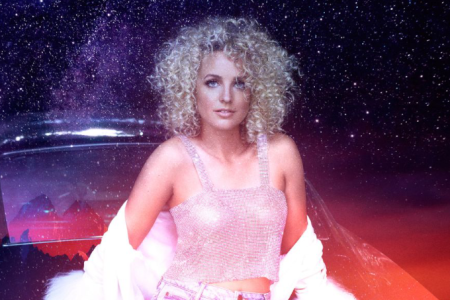 Dashing off after University lectures in 2015, with a spring in my step, I was keen to see Carrie Underwood performing as part of Apple Music Festival alongside British support act The Shires. It was a spontaneous show for me, that blew me away, not least because the second support act had the sweetest of vocals and songs that hooked and reeled me in by tugging on the heart strings. California country girl Cam had not long since released ‘Burning House’ which truly allowed her to wear her heart on her sleeve. Here in the UK she was fairly unheard of at that time, but those there that night left with a new favourite artist!

Speaking of the breakthrough single, Cam reflects, “It was a very personal story, it felt very embarrassing at first, I had this dream about a boyfriend that I didn’t treat very right. My face would get flushed as I talked about it and singing it the first few times, it was embarrassing to have been the bad guy. But it was really cathartic.” However personal it was for Cam, many people related and it was her peers who first detected that it could be a hit. “I remember when it was finished, I was working with Jeff Bhasker and Tyler Johnson on writing and production and they were like, I think this is it. I was like, is it though?”

Cam continues, “I think other people, definitely were the ones who told me how special that song was but I think it was too much in my own head about why I wrote it, to think that it could do all of this. I never get tired of singing it and I never don’t feel grateful that something that was so cathartic for me could be so cathartic for so many people. And I really do see it when I look out into a crowd, it’s wonderful. When people sing ‘Burning House’, I see it in their eyes, their hearts are feeling the same.”

Though it was her breakthrough song, Cam had spent time honing her craft and she can still remember the early songs and poetry that sparked her love of the craft. “I used to write poetry. My mum used to have us read poetry at the dinner table and I used to love writing poetry. My sister and I would make up songs as a kid, obviously like gibberish songs and funny songs.” The first song she wrote was inspired by Ben Harper. “I learned guitar when I was 20 or so, the first songs I learned on guitar were Ben Harper songs. I remember writing my first song that was like a Ben Harper progression, like the very dumbed down version of whatever he did. I feel like streetlights were in it. I couldn’t tell you exactly what it was about but I remember being quite proud of those very calm, little harmonies, very soft singing – I was embarrassed to sing so everything was very subdued.”

After releasing The Otherside, her second, major label, studio album, at the start of the pandemic, Cam is finally able to get out and tour that collection of songs as the next collection waits in the wings. The eclectic sound of ‘The Otherside’ helped to see may of us through the pandemic but when lockdown first began, there were doubts as to whether it should be delayed or not. “People asked, did you think about holding on to the album, ‘The Otherside’? I didn’t wait to put it out later, I just didn’t want to do that I had already waited a long time. I wanted to be adding music and who knew how long we were going to have to wait, so I’m happy I put that out in that time.”
Though the pandemic was hard on Cam’s heart, she appreciates that, with having a young baby, time off was already planned for her so the changes to her work schedule weren’t quite as drastic as some peoples. “The pandemic coincided with maternity leave for me. It went on longer than I thought, but I got more time with my daughter, which was amazing. The whole live music industry got shut down and I had friends who worked in tech. So everyone basically lost their jobs for a while. There was a lot of anxiety, just trying to cope and survive and I’m glad to be on the other side where things are starting to open back up.”

When things did begin to open back up, the UK was calling and Black Deer Festival, followed by BST Hyde Park were added to Cam’s schedule. Before the festivals took place, Cam gushed over her UK fans, “It’s going to be wonderful to have everyone get back together and sing the songs. I love the people that come to my shows, and especially the UK fans, they are incredible. I’m sure they don’t get tired of hearing this, but I absolutely love the community of music lovers there. It’s a very true, genuine interest in the lyrics and the emotions,” she smiles. “There’s a lot of respect for the craft, which I feel on my end, it’s really wonderful to be around. I just love being over there. It’s wonderful to get to travel and be in like a home away from home, get some good food and walk around and have a good time.”

The artists that Cam shares a line up with bring back special family memories for the Californian who reflects fondly, “This lineup for Hyde Park is insane. One night is Elton John and I get to be with the Eagles. My grandpa would just play the Eagles over and over again. I remember when he first got the setting in the car that would say like cathedral or whatever, and he would hit some setting and he would listen to the Eagles over and over,” she smiles. Despite the glitz and glamour of the line ups at Hyde Park and Black Deer, Cam loves the UK so much, that she’d be happy just playing in a pub! “If I could make it work with the travel schedule and the budgets and everything I would come over and just pop into a pub. Just the sheer joy of being back would be enough. But then to have it be this insane! I’m hoping it’s one of the five sunny days you all get and everyone’s gonna be in a good mood. I’m very, very excited.”

The night before we spoke, Cam returned to the Grand Ole Opry stage, the home of country music and the honour of performing there never gets old for Cam. “It’s such an interesting thing that this genre has a home base. I love spaces, where things happen and things get created and history has happened, the physical space of it is really important to me. So to have a space that is a little home base of country music. It’s really comforting. It’s always really warm and welcoming when I go there, and the acoustics are great.” However, Cam is an advocate for change both within society and within country music and wasn’t afraid to speak out and ask her friends at the Opry to instigate change.

“I don’t think I’ve talked about this much but back when the US was going through like an awakening, in 2020, understanding, post George Floyd, what practices and things that we were missing; why is it like this still and why aren’t we fixing and addressing it? I, privately, while booking with the Opry was challenging them a lot saying I wasn’t going to show up if it was an all white lineup, and to their credit, they worked on it. They’re definitely not perfect, but they’re trying. I appreciate that about them, that they’re giving it a go.”

Whilst juggling being a new mum and promoting her latest record during a global pandemic, Cam began work on her next record. “I’ve been working on the next album, and I’ve been planning the tour and everything just has a new buoyancy, there’s a new approach on how I’m gonna make this something. We know how precious time is now. I want to make this something so worthwhile of everyone’s time. I think that I’m really proud of how I’m moving forward and what this next chapter is going to be. So I mean, it all was great but I think looking ahead is always my favourite thing.”

However, Cam initially found it hard to adapt to the new way of working, “I don’t particularly love zoom writes, I have collaborators that live in LA, and we have learned, if you start a song idea ahead of time, then you can finish it on Zoom, but starting things seems pretty tough!” But Cam has crafted something she is really proud of and has envisaged a vibrant show to go with it. “This tour is the main thing and obviously cooking up an album on the down low but we’ve pretty much got the setlist, we’ve got a set getting designed by Rob Sinclair, who also did Kacey Musgraves, and David Burns and all these amazing people. He’s helped design this set. We’re getting the lighting and the flow set, ready to go,” she gushes.

She concludes by reflecting upon the highlights of her career so far, “I’ve done a lot of fun stuff with Eric Church, I look up to him and I’ve got to do stuff with Smokey Robinson, which is insane because I grew up listening to that. Honestly though, I think, going into this next chapter, I think I’m really proud of what’s happening now. I’m always excited about what’s next.”