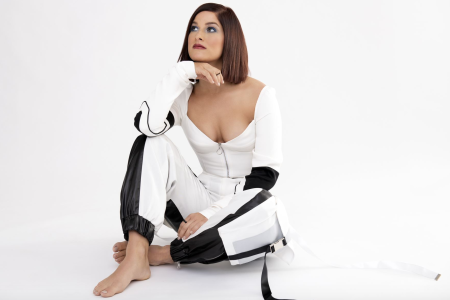 Cassadee Pope had an eclectic taste in music growing up. She soaked up those influences and channeled them into her own music, beginning her career in the world of rock as lead singer of the band Hey Monday. As she transitioned to country music, Pope became the first female artist to win America’s version of The Voice. As she releases her fourth studio album, Pope sees her two worlds collide as she calls upon friends from both the rock and country world to bring these songs to life. ‘Thrive’ is a truly unique collection of songs.

“My parents weren’t the most diverse music lovers, but they loved country music and 80s rock music.” Pope begins as she thinks back to those early beginnings, “Those were the two main genres of music that were being played in our household and on road trips. I remember, when I was a kid, listening to Bon Jovi, Slippery When Wet and just being obsessed with that album and realising my love for a hook, like a catchy hook and an explosive chorus. So I tend to write that way because of what I grew up listening to.” ‘Thrive’ is full of those kind of songs, littered with hooks and big productions that help these stories soar to a new level.

Knowing the amalgamation of genres that she wanted to achieve with her sound, Pope surrounded herself with a team that she knew she could trust. “I’ve always loved All American Rejects. Nick Wheeler (lead guitarist) and I toured back in 2008, I think in Australia and New Zealand with Fall Out Boy. So we have kind of a crazy history.” Pope begins as she reflects on the people who helped pull this album together. “I was writing a lot with Nick, he would send me these demos back and I was just like ‘This sounds like a finished product!’ It sounded like the sound I wanted for my next project so I just asked him if he would produce it and thankfully, he said yes.” Pope had a clear direction with where she wanted to go with this album, what she wanted to say and how, sonically, she wanted to say it. “2020 was so reflective for all of us, you really just sat around thinking and reminiscing. A lot of things were happening in this country when I, and everybody else, were feeling so raw. We had nothing but time to just absorb it and think on it. So I definitely talk about my stance on a couple of things, a couple of issues. It was my time to really like, lean into what songwriting is all about. That’s just telling your story and letting people get to know you better.”

With her previous releases, Pope felt pressured into conforming to the country sound, and hid her rock roots but her first writing session over zoom helped her to change that. “What The Stars See, was my first zoom writing session in March/April 2020. I remember finishing the session and feeling like ‘oh my god that felt so good,’ and then getting the demo back and feeling even more excited because it just tapped into this thing that I’ve always loved. Hearing myself in that way again was exciting. I have always had that edge to my style of country music but I really tried to fit into the country mould so I didn’t feel like I could lean into the pop punk influences. So I kept writing with people that I knew would help facilitate that sound.”

As well as working closely with Wheeler, Pope worked with Little Big Town’s Karen Fairchild; “A huge part of my songwriting, my voice and my tendencies, are country and I didn’t want to lose that – I knew I couldn’t lose that. I wanted someone else involved to keep that foot in the door and make sure that I’m not neglecting that part of my influences. Karen Fairchild has just been such a huge mentor for me, she’s a mentor for all of us girls, anytime I mentioned her to Lindsey Ell or Jillian Jacqueline, everybody’s like, ‘Oh, yeah, I went to lunch with her last week.’ She’s just always trying to help us out. She’s everybody’s Fairy Godmother.” Fairchild co-produced the record with Wheeler helping Pope to blend the two sounds, her two worlds together. “It just feels like I’m blending my worlds, both figuratively and literally, so it feels just really special and collaborative.”

The other writers Pope worked with also came from a combination of her rock contacts and country contacts and the writing process stirred up emotions she’d wanted to channel for a long time. The title track ‘Thrive’ was one such song that had been brewing for a while and it became one of Pope’s favourite on the record. “It’s a song that I’ve been thinking about writing for a long time, but I haven’t had the bravery to say some of the cutting lyrics in that song because some of them are pretty brutal.” Pope reflects, “It took that line of, ‘you really hurt me and you suck, but I’m not gonna let you defeat me.’ I had a session with two guys that I’ve known for a really long time, Kevin Bard and Andy Albert, who I’ve been around in the pop punk scene. I came in with the idea of, I didn’t just survive without, I thrive. I really wanted it to be something that people could relate to, not just relationships, but their work, or a family member or a friend, someone that really hurt them. I wanted it to feel just like this thing that everybody could sing and feel empowered by.”

Say It First was another song that had been bubbling away for a while – six years in fact! Written with Ross Copperman and Heather Morgan this song was one of those that almost haunted Pope. It had never quite made the cut on her other records, for one reason or another. “I wanted to go back through some old songs that I still love and Say It First just fit so nicely in with all the other songs that I had written at that time” Pope begins. “Heather had the title. I remember going into that session just, it was one of those sessions where I had no clue what I wanted to do. I was in a weird place in my career, where everybody was telling me No, or whatever I was writing wasn’t working for them. So I’ve got into this amazing session with these two incredible writers and thankfully, she had an idea, Ross had the kind of vibe he wanted to go with, which is very nostalgic kind of Avril Lavigne, which is totally up my alley. It’s just a song that I’ve always loved and I can sing it now with a different perspective, because I’ve been through some big breakups and had to be the one to call it quits first. So, when I wrote it, I had broken up with boyfriends in high school, but not the real gut wrenching breakups that are life changing. So I can sing that song with a little bit more passion now.”

However, the majority of the record was written over zoom in 2020. Pope learnt to adapt quickly to writing and collaborating during the lockdown. “Writing on zoom has been pleasantly amazing for me. I get to strip away all the distractions of driving to the session, making sure my dogs have someone to let them out during the day, making sure I have snacks. I might get hungry during the session, and I don’t want to stop the flow to get lunch so I just end up starving. Here, I get to be in comfy clothes, I can pop down and grab a bag of chips if I’m hungry or an apple if I’m being healthy. I feel inspired here because it’s a space that my boyfriend Sam Palladio and I have really come to make homey so creating here has just been really game changing.”

Recording the album proved to be a little trickier but again, they adapted well. “We had to get everybody tested and everybody wore masks the whole time. It was funny, at the end, when we all were having a drink outside, everybody took their masks off and we were seeing each others faces for the first time. I’m so glad we took all the precautions because nobody got sick, everybody was fine and safe. It’s been a little bit difficult and weird at times but we’ve we’ve figured it out somehow and I’ve ended up with my favourite project to date.”

Cassadee Pope wears her heart on her sleeve for this truly eclectic collection of songs which sees her two worlds collide. Upon the release of ‘Thrive’, Pope hopes to get back out on the road, something she’s missed during the last 18 months. She also teases the idea of a UK trip too – “I can’t wait to get back over there” she says with a grin.