Charley Crockett: Carving his own path 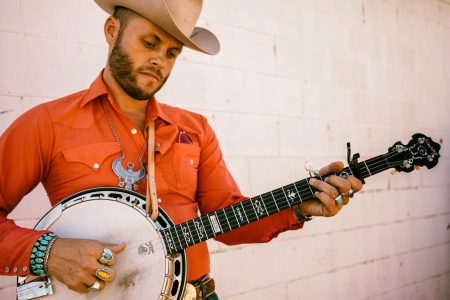 Charley Crockett’s life and career has been somewhat of a rollercoaster. From a tough upbringing to getting into trouble with the law, Crockett has battled his own demons by turning to music time and time again. Something which began as a teenager when he picked up the guitar for the first time. “My mama got me an old Hohner guitar out of a pawn shop in Irving, Texas when I was 17.”

Crockett, who grew up somewhere between Texas and New Orleans spent much of his adult life running from his roots but they had a way of following him around. “I’m from a South Texas area called the Rio Grande Valley. And it’s a very isolated place. You know, we weren’t doing real good down there. My mama moved with me, up to Dallas. I would go and live with my uncle in the summertime in New Orleans, and he lived and worked in the French Quarter, which is the area of New Orleans that people talk about. When I was really young, I spent a lot of time in New Orleans on the street there and I always kept that with me. so eventually, years later, I became a street performer in that same neighbourhood just by circumstances.”

Crockett continues, “South Texas was similar to New Orleans in a way. You can try to run away from where you’re from, but even in doing that it just defines you even more. So Texas… I had a hard time with Texas, especially Dallas, Fort Worth area growing up, I had a really difficult time with it, we weren’t in a great situation and I didn’t have fond memories necessarily, of that area. In a way, that’s what makes a town like Dallas, a very blues town. I ended up back there for a while playing in bars playing blues and country. The further I tried to go across America away from those places, I got to a certain age and realised who I am is the culture of Texas and Louisiana.”

Crockett’s single off his upcoming album I Need Your Love has a soulful vibe to it. “I just kind of wrote that one really easily and quickly.” He added “You can write a record of country music and if you put a soul song on there, that’s the one that’s going to be the single and that’s the one they’re going to push to radio. Because traditional country music is not seen as commercial. It’s not seen as sellable.” The music industry, particularly the country music industry is a peculiar business to Crockett who in the past few years has focused on creating as much as possible for his fans. “Country music is such a strange world because even the country music formats, they don’t really want to push or promote anything, that’s true country music.” For a while and for various reasons artists have raged against country radio in particular. “I think there’s a big disconnect between what they play at radio, and what makes people want to listen to somebody’s album.”

He compares the greats that he grew up listening to and their release schedules compared to todays major label models, “It’s kind of like a reality TV driven world. You find somebody who’s maybe making music in obscurity in their bedroom or something and then they sign them to a label, and then they promote the record for like, two years. There’s very little development. Back in the day, no matter what type of music you’re talking about, that’s not how it worked. Ray Charles recorded 60 albums, Willie Nelson has recorded 70 albums. I’m not making records to satisfy the music industry, because the music industry, to me, is dead. I’m trying to figure out why American artists used to record three or four records a year, and now they’re recording, like one record every two or three years. I just don’t see how a young person making music could be excited to do that.”

For the Texan native, there are some hidden gems on ‘Music City USA’ that he can’t wait for fans to hear, “My favourite song is probably the song I wrote called, Only Game In Town. It’s probably the least commercially viable song on the album. I’ve watched a million old westerns, there’s always a saloon in this one horse town, somewhere in the middle of nowhere, in the Mountains or something. And there’s a card game going on, the game is rigged but they always play it anyway even though they know it’s fixed. I really enjoyed writing that song. There’s a line in the song ‘You came in feeling lucky/We all know how that is/The dealers my friend/and the house always wins.’ That’s America. That’s the music business in a nutshell.”

As ‘Music City USA’ is shared with the world, Crockett is sure to be plugging away, already on to the next one as he continues to release music his own way, in his own time.