Charlie Worsham: The road to happiness 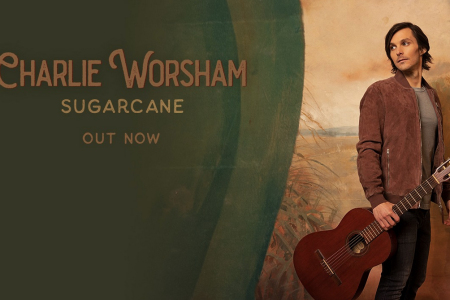 I’ve had the pleasure of seeing Charlie Worsham perform live on a number of occasions both as a solo artist and as part of Old Crow Medicine Show. What always struck me about him was his energy and humour on stage. This talented and versatile musician is a fan favourite here in the UK and though many of his fans have missed seeing him in a live setting, they’ll be delighted to know that he’s been keeping himself busy as he releases a new EP this summer.

With a smile on his face, Worsham reflects on the last few months as he learns to juggle music and parenthood “This is my life in a nutshell, I have all this new music coming out and a six week old baby. Before Gabe got here I filmed all these music videos knowing I’d need to hunker down with him and Kristen when he arrived. They shot the other half, that I wasn’t needed for, on Monday. We loaded up the car seat and baby Gabe and went over to watch, so he was on set for the first time!” Worsham glows as he talks of becoming a Dad during Covid, “If that had happened at any other time, I’d probably have been rushing back on a bus or a plane and may have missed the birth but I’ve had the chance to be a part of that journey and I’m taking songwriter notes the whole time!” He laughs.

It’s two years since I last saw Charlie Worsham perform at Marty Stuart’s Late Night Jam at The Ryman Auditorium in Nashville. That’s where Charlie first fell in love with country music. “We made a lot of road trips up to Nashville. The first time I ever made a bit of money was playing banjo on the sidewalk of lower broadway. On one particular trip I had saved up for my first electric guitar and I fell in love with one at Gruhn guitars. It was $600 and I only had $500 so I went on the street with my banjo and played until I got the $100 I needed. On the journey there, we’d listen to the Grand Ole Opry. My Mum had Keith Whitley’s Greatest Hits and there was a lot of Vince Gill. Then my Dad introduced me to The Stones – that was my first rock concert. That night I saw a naked woman and I smelt what I now know is substances being smoked. I got a little beer splashed on me, I was probably too young for all that but it shook me in a beautiful way.”

Worsham continues to reflect upon his childhood, “When I was two years old, my mum would be cleaning the house and she’d have the vacuum cleaner on and engines have a tone that they operate at and she’d shut it off as she’d think something was wrong with the vacuum cleaner and it was actually me humming along in pitch to the vacuum cleaner!” He laughs as he explores where his love of music first began.

It isn’t just parenthood that has kept Charlie busy during lockdown, not only is he bringing out a new EP but he is an in-demand session musician. “The session work has been a real silver lining along with bringing a child into the world” Worsham reflects, “When I get a call to play on someones record, whether that’s Eric Church, Luke Combs’ next record, Hailey Whitters, Drake White, I get called for some guitar but also banjo and mandolin. All of us session musicians, we’re just different ingredients for the recipe. I’m tickled that my particular ingredient is called for more and more these days. I have this Bluegrass meets Mississippi Blues background.”

“What I love about playing a supporting role is that the pressure’s off in some respect.” Worsham continues, “I’m focused on one thing, when I’m backing up Vince, I don’t have to point to people in the crowd, it’s not my job to entertain so I’m focused on the guitar part or the harmony. Left to my own devices, I gravitate towards a supporting role and I think that’s been part of my journey as a solo artist, I’m not always the guy who pushes others out the spotlight to say look at me. I come from a place of, how can I do this tastefully but in the last few years I’ve gotten comfortable with saying, ‘y’all get out of my way, this is my spotlight’ when it’s my job to do that.”

As he ponders on the musicians he’s performed with or backed up, Charlie once again brings up fond childhood memories “There were moments early on, my parents would take me to a Vince Gill concert and the lights would go down and when they came back up he’d be playing a different guitar. That felt like the dream to me, he was my first guitar hero. I had such a desire for the guitar, to have one and to learn it, whether that was to grow up and be Vince or grow up to be Marty Stuart because he had his own version of it. I’d turn on CMT and see the Tempted video or the That’s Country video – he had the rhinestones and he was oozing with cool.”

It was whilst playing on Eric Church’s last album that he got to know producer Jay Joyce a little better, who went on to produce Charlie’s new EP. “We had a lot of down time because they’d be writing the songs in the daytime and we’d record them at night. So in that time he’d play me some records and I’d play him some records, we got to know each other. So when I stepped into the studio for my own project there was a relationship there but not enough of one that I was completely comfortable and that was good for me. I’ve always made records with my friends and I’m super proud of them but when you’re making records with your friends it’s harder for them to say “I’m going to push you on this. Go home and try that solo again” you’re buddies so they don’t say that.”

The recording process for this record was different from previous albums, “With ‘Rubberband’ we were discovering the recording process so we’d get something brilliant and do a victory dance! Jay makes records like you and I scramble eggs in the morning, he’s not precious about anything. So when I get the coolest guitar solo of my life, in the past I’d have been like ‘Yeah, let’s listen back five times’ Jay moves onto the next thing. He cares deeply about the record but he’s not precious in that same way, it was good for me. Jay challenged me, ‘Find your one guitar man, don’t come to the studio with eight guitars’. So for the whole record I’m playing one electric guitar, this 1960 Gibson 335 which is my dream guitar. It was actually a very sweet wedding gift from my hero Vince Gill. The gift of this guitar was also as much of an impact as the instrument itself, it’s that vote of confidence, that has shaped me over the last couple of years.”

The dark side of the industry

Charlie Worsham’s new EP really takes the listener on a journey and it oozes with positivity. However it hasn’t always been an easy ride for Worsham who’s ever present smile fades just slightly as he reflects upon the themes of the EP and in particular, Fist Through This Town. “What I’ve learnt is that it’s important for me to be real with people and share my vulnerabilities, because my buddy Dave Barnes has this great quote ‘When we share our strengths we breed competition, when we share our weaknesses we breed community’ and I’ve seen that the more I share my frustrations with songs like Fist Through This Town the more people relate and think ‘I’ve been there too’ and when you’re the one in the spotlight you can take that and run with it in a way that you can’t when you’re in that supporting role.”

“I was on the road a lot in 2014, I didn’t have time to be still and listen to my heart.” Worsham continues as he looks back on his career. “Towards the end of that year, I was performing a set – it was 15 minutes of Sam Hunt who was exploding at the time, me for 45 minutes and Kip Moore headlining. The audience every night was a mixture of Kip’s loyal following, and people who really wanted to see Sam Hunt because he was skyrocketing. I was this bit in the middle, a lot of people didn’t know who I was and I was frustrated. I let that show to the crowd and I didn’t deal with it in the healthiest of ways. I learnt that my anger and fear was connected; I was angry so I didn’t have to feel afraid. A few years later, my second album didn’t take off, the week it was released my manager quit, my publisher fired me and I still owed them ten songs. I was going out on the road with Brandy Clark which was super fun but I was stressed!”

However it wasn’t all bad for Worsham who managed to find a silver lining through the pressures of the industry. “My release party was at The Station Inn and there with me was my future bride Kristen. She walked back to the car with me to put my guitar in and that’s the first time I told her I loved her. In telling her I loved her – I told her because it was true and I do – but I was telling myself that I was tired of putting all my eggs in this one basket waiting for this mystical number of play counts or chart positions to make me happy. Fist Through This Town is about getting frustrated again but being honest about it and in doing that I found the love of my life. It’s been a beautiful journey and I think when people hear this EP they’ll hear that journey from Fist Through This Town to being on a beach on my honeymoon which is Sugarcane.”

Very quickly, Charlie Worsham snaps back to the here and now as he hear’s Gabriel crying downstairs. “I’ve figured out a way to have him in my arms and play guitar at the same time. There’s a Willie Nelson song called ‘Love You All Over The World’ and I played it to Kristen’s bump; I think he recognises it from his days in the womb.” With a grin that stretches from ear to ear he concludes, “Everything’s magic right now.”