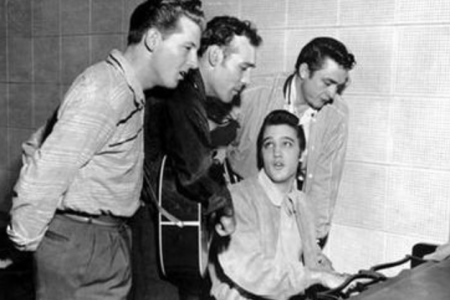 With the passing of Jerry Lee Lewis late last year, it was officially the end of an era as he was the last surviving member of the Million Dollar Quartet. The quartet made up of Elvis Presley, Johnny Cash, Carl Perkins and Jerry Lee Lewis were never really an official group. The four men, who all worked out of Sun Studio in the 50s, happened to find themselves all together on December 4th 1956 and broke out into an impromptu jam session, the details of which are refuted by those present that day. The most important detail though was that engineer Jack Clement began to record the spontaneous session.

It was Perkins recording session, he had just had success with ‘Blue Suede Shoes’ and Jerry Lee Lewis, currently unknown outside of Memphis had been invited along by Sam Phillips, studio owner to assist with the session. Elvis who had recently left Sun for RCA dropped in casually with his girlfriend whilst Cash, who had made a name for himself on the country charts by now came in to listen to Carl Perkins.

Phillips called a local news paper as the session progressed, the Memphis Press-Scimitar. Bob Johnson, the newspaper’s entertainment editor, came over to the studios accompanied by photographer George Pierce and it was he who captured the infamous photograph you see in this article. Johnson wrote an article about the session that was published the next day and it was he who dubbed them the Million Dollar Quartet.

Despite the interest in the session, the recordings would not be released until several years later, after Elvis had already passed away. It was 1981 when the album was first released in Europe. It featured 17 tracks, mostly sitting within the gospel category and you hear the session in it’s rawest form with commentary and interjections from the four men audible on the release. What was thought to be the full session was released in 1987 but in 2006 even more material was found and this is argued to be the complete master recordings from that session though musical historians still dispute this.

It should probably be noted that on the recording, many claim there is no sign of Johnny Cash however, in his autobiography published in 1997 he refutes this saying he was the furthest away from the mic hence why his voice is not as audible as the others. Presley takes the lead vocal throughout much of the session with Lewis on keys.

The full collection features a mix of mainly traditional gospel and country songs originally by artists such as Gene Autry and Bill Monroe. The most revered song by critics is the quartet’s version of ‘Don’t Be Cruel’ which Elvis released that year. The session is a seminal moment in rock n roll and gives a breathtaking insight into the relationship between these trailblazing musicians and their time at Sun.

The Million Dollar Quartet session has now been dramatised into an award winning stage musical.