Connie Smith: The Cry Of The Heart 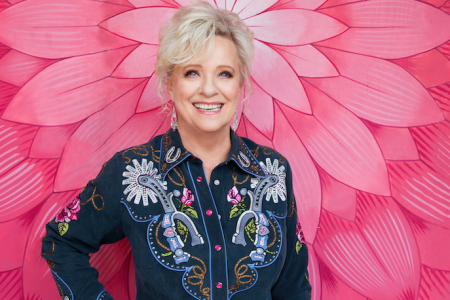 An 80th Birthday, 56 years at the Grand Ole Opry, a new great grandchild and a new album – legendary country Queen, Connie Smith is living life to the full.

Connie Smith burst on to the scene with her debut hit single Once A Day back in 1964. After 57 wonderful years within country music, Smith will celebrate her 80th birthday and her 56th year as a member of the Grand Ole Opry later this year. What better way to celebrate than by bringing out a new album, her first in ten years!

All her life, Connie Smith only ever had one dream – to sing at the Grand Ole Opry. “I just remember when I was five years old saying that some day I was going to sing on the Opry, that was my big thrill and of course I wound up there – this is my 56th years as a member. Dreams do come true!” Smith begins with a laugh. The Grand Ole Opry was where I first saw Connie play. I had a lot of her records and of course played Once A Day on my radio show quite often. My first ever night sat in the audience of the Opry, Smith came out and sang that signature tune and I began to cry tears of joy. Smith is a legend within the genre and to see her in such a revered place was truly inspiring to me as a young country fan. “I still get scared to go out there” Smith confides, “its a very special place to me, and to know people, like you, come from all over the world to be there, that’s special.” Smith recalls, “I know how I felt the first time I went to the Opry, that was March 12th 1964 and I got to go back stage and meet Kitty Wells – that was really something!”

The passion Smith has for the genre and the radio show that first gave life to it is evident in everything she does but a huge part of Smith’s life is her family, which has kept her busy for the last decade. “There’s plenty of things to do, I’m Marty’s wife and I go with him every once in a while, I’ve got my own band and we travel some. Then I’ve got five children and eight grandchildren and in Norway I have a great grandchild that was born in October. So there’s plenty to keep me busy.” Smith says of her absence from the studio. Husband Marty is also quite the legend within the genre, before embarking on a solo career, he toured as part of Lester Flatt’s band and then with Johnny Cash. Since then he has released over 20 studio albums and won five Grammy awards. “I look forward to watching him grow” Smith beams, “each day his singing gets better, his playing gets better, I live with him, I love him and I know him but whatever he sets out to do, whether that’s writing a song or he does some photography, I’m amazed, ‘how did that come out of him?’ he’s just a miracle!” Smith gushes.

The Cry of the Heart

Stuart was instrumental in Smith’s new album ‘The Cry Of The Heart’, not just in the production of it though; “Well Marty has encouraged me throughout the years to go ahead and record. I love to sing though and Dallas Frazier who I’ve recorded a lot of his songs came round one day and played us a song and I said ‘I want to record that’ and Marty said, ‘Good that will be the first one on the new record’. So I recorded my 72nd song that Dallas Frazier has written.” Smith reflects on where the origins of her 36th studio album came from. “We just started gathering up songs that we liked and a couple were songs I had sung on the Marty Stuart show, they just took them off there and put them on the record because they were great songs. One that Billy Walker had recorded called A Million And One and one that Jack Greene had recorded called All The Time. Theres a couple of songs that Carl Jackson had written, Marty and Harry Stinson wrote one for me and Myself and Marty wrote a couple.”

One of the songs Smith and Stuart wrote together ‘Here Comes My Baby Back Again’, is a favourite on the record for both Smith and Stuart. “It has everything going for it” Stuart says. The pair wrote it out on the road together, where they write many of their songs. “Marty and I were going somewhere and it wound up there was just he and I and the bus driver left on the bus. We love it when that happens as we get to just hang out together so we started writing songs. That was his idea, sometimes it’s his, sometimes its mine but I believe that was his. We started working on it and finally I said, ‘lets get this done before the bus driver kicks us off the bus’. Because we sang it and sang it, we write a lot on the bus. When Marty got done producing it, it was great, I’d like it even if I wasn’t on it!” Smith laughs.

Reflecting on their lives and career together Smith continues; “We got together writing songs, we’re approaching our 24th anniversary. The more we work together, the more we love it, because the more we understand each other – I know what he likes and I trust his judgement so much more than when we first started, and he knows what I like and understands why I want to do what I want to do.” She delves deeper into the writing process “It’s whatever comes to your heart, sometimes it’s a lyric and sometimes it’s a melody, sometimes they come in twenty minutes and sometimes you have to keep going back to them. I remember there was one we started writing when we first got together and many years later we finished it and recorded it. The way we do it, it’s not very technical, it’s just whatever’s in our hearts.”

Back in the studio

The recording process was just as invigorating for Smith, as she speaks so highly of the various musicians involved in ‘The Cry Of The Heart’. “The musicians are great musicians and we love getting together and playing some songs. Marty played six or eight guitars trying to get the different sounds because he was playing lead. He and Harry Stinson his drummer wrote Look Out Heart and they sang harmonies for me. Justin Weaver played rhythm. Everybody who knows me knows that the steel guitar is my favourite instrument, it’s my dancing partner, my steel player who’s out on the road with me Gary Carter, he’s the best steel player around and he’s playing on this which helps. Of course, Pig Robbins the piano player that’s played on more hits than you and I have ever heard, he’s magnificent and he played on my first ever record that I recorded July 16th 1964. He played on this record as well. Hopefully for as long as I record, he’ll play for me.” Smith continues singing the praises of those she worked with, “Paul Martin, who used to be in The Fabulous Superlatives, he stopped working with them some time ago as he had four kids and they all started to sing so he started a band with them – they’re so good – but he played on the record too. So did Chris Scruggs, who is the grandson of Earl Scruggs, he’s one of the most talented people that you’ll ever meet.”

Through her time in the business, Smith has achieved so much and has paved the way for women in country music especially. It’s those early dreams that came true, that Smith cites as highlights. “Being a member of the Grand Ole Opry was a dream come true and in 2012 they inducted me into the Country Music Hall of Fame, it was Merle Haggard that inducted me. That’s still unbelievable and this year I get to induct my Husband into the Country Music Hall of Fame, so that will be a proud moment for me!”

Despite all of her success, Smith always has time to help the next one in line and always offers advice to those coming through the ranks. “I look forward to watching more new artists. I remember the first time I heard Keith Urban, I told him ‘you’ve got what it takes’ and the same with Clint Black, Dwight Yoakam, Leanne Womack, Chris Stapleton – everyone knew when they heard Chris that that was going to be big. I look forward to that and welcome all the young ones in and I encourage them to be who they are.” She touches on her faith as she advises, “I’m a born again christian and the scripture says we’re accepted in the beloved and there’s a lot of rejection in this business, it doesn’t matter if you’re good or not. I’ve seen really fine singers that have never made it because they knew they were good but they got turned down and they turned bitter and you can’t hide that bitterness. You need to realise it’s not personal, a lot of it is business, it’s corporate and it just happens. When I first came to town there was room for a million but only one of each, if we sounded like anyone else we couldn’t make it. If you want it to last you have to be an individual. Share what you have, not what you heard from somebody else.”

Smith continues to perform regularly at the place she calls home, the Grand Ole Opry and was even a part of their line up throughout the pandemic. “The people backstage, the artists, the stage hand, the manager, they’re like family! We all have that same love for the show and for each other. I was on there the first night they couldn’t have an audience and the last night before they had an audience and then I got Covid. It was strange singing to all those seats with no audience.” She reflects. Smith looks to the future, and promises she won’t leave it so long between this album and the next! “I’m still going! I’ve got seven songs ready for the next record. I’ve got a goal of going to Norway to see my great grand baby first though. I’ve got five children and eight grandchildren so I want to continue to watch them grow.”