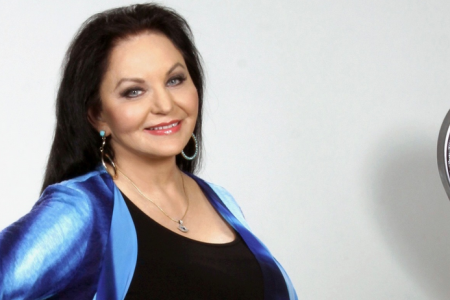 Crystal Gayle is a household name around the world, her exemplary career shows no signs of slowing down as she teams up with Swedish songwriter Sulo Karlsson for her latest collaboration.

Crystal Gayle grew up in a musical family. With sister Loretta Lynn already making waves within the country music scene, Gayle found her own path within the genre and became one of the most successful crossover acts of all time and a global household name. It’s no surprise then that after fifty years in the business, her music is still inspiring musicians all across the States and even in Europe. Her latest project sees her team up with Swedish songwriter Sulo Karlsson for an across the pond collaboration. Her longevity within this great genre is testament to the hard work she’s put in over the years, starting from those early days growing up in the hills of Kentucky!

Gayle came from a big family, she was the youngest of eight children and her love of music began early. “My mother says I could sing before I could walk!” Gayle laughs as she reflects upon those early years. “I grew up in a musical family, all my brothers and sisters would sing and play instruments. Being from the hills of Kentucky, we would gather on the front porch and play instruments and just have a good time, and being in Butcher Holler, you could hear the music from one holler to another. So music was just a part of our life, it wasn’t ‘ok I’m going to be a country music singer’ it was just what we loved to do.” Gayle’s family was close knit and she drew inspiration from her siblings “I was surrounded by my sisters music. My mother listened to the Grand Ole Opry, starting back in Kentucky on the radio. We moved to Indiana when I was about four, that was when the mines were closing and everybody had to find work in different places, my Dad and Mum found work Wabash and that was a great place to go. The music we used to sing on the front porch in Kentucky moved to the living room in Wabash, everybody would gather.”

Now Gayle has passed that love of music onto her son who worked on her last album with her and on this project with Sulo. “I loved being in the studio with my son Chris, he co-produced my last album ‘You Don’t Know Me’ which is filled with great country hits that I grew up singing.” Gale says about the record which came out in 2019. Gayle wanted to share her musical foundations with the next generation; “I wanted my son to hear some of these songs that I grew up listening to. Real country music! Songs that meant something to me, songs like Ribbon of Darkness, which Marty Robbins once sung and that song was the first song I got to sing at the Grand Ole Opry when I was 17. I got to open for Marty early on in my career. When I look back at all the people I got to see and meet, the musical heritage, people like Jack Greene and Faron Young – all these great artists. I wanted to share those stories.” Gayle gushes as she thinks back over the years.

Crystal Gayle’s son has continued to work with her and assisted her in the studio for the new single she has recorded with Sulo Karlsson called Lonely Street Choir. Karlsson is best known for his work as part of the rock band The Diamond Dogs but this latest collaboration isn’t Sulo’s first foray into the world of country music. In 2016 he released a country influenced duets album which featured artists such as Rissi Palmer and The Bellamy Brothers. Crystal Gayle talks us through how the collaboration came about. “I got an email from Sulo asking if I’d like to sing with him on a song. He sent the song and I loved it, I loved the fresh sound. I didn’t know Sulo much at the time although I love the Diamond Dogs that he’s part of. It’s just great music, I love his writing. When I heard it I said, yes!” However with a global pandemic going on around them, the pair couldn’t record together and had to adapt to the situation which Gayle says wasn’t too much of a problem. “I went into my studio in Nashville with Chris and I did my vocals there, Sulo already had a track started and they added and took away, so we just listened back and forth. It worked great, there was no problem doing it from one studio to another.”

As Crystal Gayle thinks ahead to future projects she also takes time to reflect on just what an illustrious career she’s had; “Doing this record with Sulo was exciting, I love trying new things but, I’ve had a huge career, I still perform and I love all aspects of it” she says as she ponders her proudest moment, “I’ve had success in so many ways and I’ve been very, very lucky. There’s great songwriters in Nashville Tennessee and I’m lucky to have been a part of that. Every process is special to me from recording to touring. Winning the awards is great but I love receiving letters from people who have listened to my music and it’s helped them through their life, I think that’s a rewarding feeling.”

One song that had a profound impact on fans across the world was Gayle’s signature hit Don’t It Make My Brown Eyes Blue which topped the charts in the US and Canada, charted in the top ten in New Zealand and the Netherlands and got to number five here in the UK. “A song like Don’t It Make My Brown Eyes Blue, they don’t come around that often and I was lucky to get a hold of a song like that” Gayle enthuses. “It was the right time, the right place, it says so much and so little because it’s not this long drawn out song that you have to really concentrate on to remember the words, it’s just a part of you. That song is a part of me. Richard Leigh who wrote the song also wrote my very first number one which was I’ll Get Over You, I had a connection with his music, we just work so well together – I’ve recorded several songs of his. It’s a song I’ll never get tired of singing. Pig Robbins did the piano lick on that song, if you look at his work, he’s done a lot of musical, piano intros that are recognisable so I was lucky to have him on that session.”

Gayle is close to her sister, Loretta Lynn, but she never lived in her shadow, she always paved her own way and remembers the advice she gave to her when she first started out. “When I started recording my sister Loretta gave me the best advice. She said ‘quit singing my songs, don’t record anything I would, because we have one Loretta Lynn and we don’t need another’ so she said I have to have my own sound and go my own way, she said you go more Middle of the Road so that is why I had songs like Talking In Your Sleep and Brown Eyes because they were a little different than what my sister would record.” She reflects upon this as she dishes out her own advice for upcoming singer-songwriters trying to make it in the genre. “Be true to yourself, don’t let anyone try to change you or the music you love. You just have to sing anywhere you can. Nowadays the music industry is so totally different than when I started. It’s hard to be out there, you have to start writing whether you are a writer or not because it’s good practice and helps you learn songs that other people have written. With the internet and social media you can have a hit without being on a major label which I think is great.” Gale concludes, “Be yourself and have fun!”

As Crystal Gayle continues to perform and work on the next project, she also takes time to focus on what is most important to her, her family. “I have a new grandchild who is eleven months old soon and he is so sweet, Bjorn, is his name, I have two now – Elijah is my first. Spending time with family is very important to me!”