David Ferguson: From behind the desk 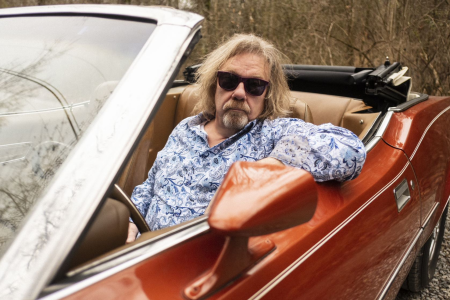 Revered Nashville producer, David Ferguson, cut his teeth in the industry working with his idols such as Johnny Cash and John Prine, producing and engineering their hit records. After 40 years working in country music, Ferguson is stepping out from behind the mixing desk and into the spotlight as he releases his first album.

Ferguson, known affectionately as Fergie to his friends, knew from an early age that he wanted to live and work in the industry that he’d grown up surrounded by. “My grandfather was a musician. He came to Nashville in the 50s, brought his daughter up here to be a country music star. It didn’t quite work out that way, he wound up raising his grandchildren, but he was a big influence” Ferguson reflects. “When I was about six or seven years old, my mother was able to take us to the television show tapings of Porter Wagoner and Bill Anderson and some of the CMT shows that were going on at the time. I guess one of the biggest influences was Johnny Cash, watching the Johnny Cash television show. I really, really loved that back in the late sixties and early seventies.” Most can only ever dream of meeting their idols, let alone working with them but Ferguson made his breakthrough in the industry working with Johnny Cash; “It’s great to meet one of your heroes, and he turned out to be a great guy, there’s nothing more disappointing than to meet your childhood hero and they’re not a nice person. But Johnny was a really great guy and funny. I was very lucky to be where I was at that time and I have Jack Clement to thank for that. I was lucky enough to get a job working for him when I was 18 or 19.” Ferguson would go on to work with Cash again on his American Recordings from 1990 up until his death in 2003.

Stepping out from behind the mixing desk and becoming an artist at this point in his career wasn’t exactly planned. That being said, Ferguson had been collecting these songs for a number of years as they spilled out through studio walls and stayed with him. “It didn’t all happen at once” Ferguson begins, as he begins to take us through the songs that feature on the record, telling us the story of when he first connected with each. “There’s a song on there called Looking For Rainbows and another called Fellow Travellers, I’ve always loved those songs. I heard them through the walls whilst working for Clements, I made demos of those songs back when they were written. One of the writers of those songs was called Charles Cochran and he died in a car accident back in the mid-2000s but he’d made piano tracks of those songs for his wife to sing over at a wedding. I was so glad I had those piano tracks as I just built everything around those, I put my vocals on and a string arrangement. Nobody was working during the pandemic so I started going through some of my stuff and the record started to form.”

After working for so long in the country music world, Ferguson’s contact list has grown considerably and so he called upon a number of friends to assist him in bringing these songs to life. “I would listen to these songs and think, ‘I’d sure like to here Tim O’Brien do that part’ for example, I’m lucky enough to be able to make that happen just with a phone call. Sierra Hall started using my recording studio, The Butcher Shoppe to work on her records and I think she is special. She’s really great singer and really got a touch on that mandolin. And her husband, Justin Moses is really fantastic.” The array of talent Ferguson called upon wasn’t just from Nashville either. “Roger Cook has the most songs on the record, he’s from England and he wrote a lot of classic songs like Long Cool Woman in a Black Dress by The Hollies and I’d Like to Teach the World to Sing, the big coca-cola commercial. My favourite song on there that he wrote is Chardonnay because that’s a love song to a glass of wine which I think is pretty creative.”

Ferguson called upon Margo Price and Harry Stinson of Marty Stuart’s fabulous superlatives to contribute harmonies to the song. “I worked with Margo not too long ago, Sturgill Simpson and I worked together on ‘That’s How Rumors Get Started’. There was a lot of records I worked on with Dan Auerbach as well that all came out just before or during the pandemic so they couldn’t tour them and they didn’t get as much support, it was heartbreaking. But Margo is a good friend of mine, she doesn’t live too far from me and I don’t think the pandemic kept her down for five minutes – she’s a lot of fun and she loved that song. Harry Stinson’s voice just blends so well with Margo’s on those vocals too.”

As Ferguson readies himself to release his debut album he reflects upon his past achievements and what he hopes to achieve as an artist. “I just made this for my Mum” he laughs, “I’d like for people to be entertained by it, that would be great – that’s enough. I don’t aspire to get Grammys or anything like that but I’d like for the record label to make their money back, because I really like those guys” he says with a grin.

‘Nashville No More’ is a record you listen to time and time again and after every listen you hear something new. The intricate details Ferguson has channelled into the production and arrangement perfectly frame this collection of outstanding songs, something only an experienced engineer could master!