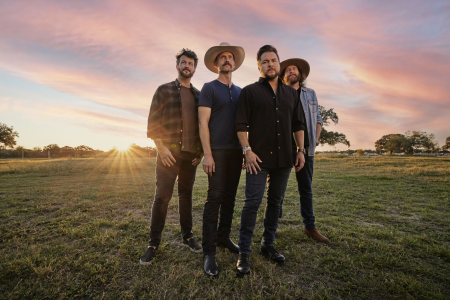 The Eli Young Band have been making music together for the past twenty years. A band of brothers who met in college and started out making Texas country music, took the country world by storm with their hits and harmonies. Last month, they released their sixth studio album, ‘Love Talking’ which featured the number one hit ‘Love Ain’t’. The four of them, Mike Eli, James Young, Jon Jones and Chris Thompson, joined me over zoom from their homes. It’s something they’ve got used to over the past few years, Jon, with a wall of bass guitars behind him, quips.

Although lockdown came as a shock to the system for the guys who had spent much of the past 20 years on the road, it was also a relief too. “After touring 100 days a year, which we’ve done since we were right out of college, it was actually very nice to be able to be home and be with our kiddos,” James reflects. “I had a kid over the pandemic and so did Chris and we all just got to spend time with our families and slow down and take a look at what we have and be grateful for everything that we’ve had. I think it made us realise how great making music with each other is and we were itching to get back on the road. So it was a good reset button for the Eli Young Band. I think it helped us be appreciative of what we have.”

Partly due to the separation caused by lockdown, the majority of the record was written by Mike Eli with the exception of two tracks. Though previously all members of the band had been heavily involved in the writing process, Mike explains how things changed. “I think that personally, and I know all four of us, have always been pretty open to letting the process take on its own life. I think if you close the doors, and you try to do it the same way every time, you close yourself up to new opportunities and new ways to write and different types of songs to write. With COVID and 2020, we started doing some writes over zoom, so that flipped the whole process on its head and I try to go into every write with an idea, whether it’s a lyrical idea or an idea that already has a starting place melodically. At that point, once we’re sitting in the room, left turns are made and you have to be open to that and go with the flow.”

The two outside cuts, ‘Love Ain’t’ and ‘Break Up In A Bar’ quickly became fan favourites whilst out on the road and Mike reflects on how the latter found them. “‘Break Up in a Bar’, for instance, that sucked us right in straight away. But I think that our first priority is always the live show. So when we hear a song, I think that we try to hear it in the live show. And then if that gets us then it gets a second listen. Obviously ‘Love Ain’t’ was already a number one for us. But ‘Break Up in a Bar’, we can already tell when we play it live, our instincts were right, and people are singing along right away.”

However, Mike had his reservations about including the song at first. “I had written so many songs that I was probably a little more sensitive towards recording another outside song for the record. But the other three guys and a few other folks, including my wife said, I think this one, you should probably listen to everyone around you. Not that I didn’t love the song because I did, but I was also like, I busted my butt to write all these tunes. But I knew the moment we recorded it, and especially now that we’re playing it live that it was the right choice.”

Playing live is their favourite thing to do, it’s obvious when you start talking to them why as their faces glow when they talk of their touring experiences. “There’s being hyper focused and hyper aware with what you’re doing,” Chris remarks. “You’re just completely in it, thinking about something totally different. I think in the middle, there’s this kind of Zen moment, where you, not to sound super philosophical, but where you are just hovering above yourself, and it’s the perfect place to be. It doesn’t happen every week but when it happens, it’s a really great thing,” he beams. Jon adds with a laugh, “If you focus on what your fingers are doing too much, then they don’t do it. I think it’s about finding that way to be in the moment and focus on something that’s going on, but not necessarily really diving into what you’re doing because that can be a train wreck moment, that’s hard to come back from but there is the occasional grocery list that’s made on stage.”

When it came to the songs on this record that Mike co-wrote he took influence from the pandemic and tried to focus on the positives and the things he had to be grateful for, and one song in particular came flowing out, ‘Lucky For Me’. “We had stepped off the road and were trying to search for that positive moment because of all the negativity in the world. I found that my family, my wife and I were just enjoying it so much being able to have none of the pressure of going out on the road and packing a suitcase. And so I wrote a song that described everything about her and then a few extra things that just rhymed. ‘Lucky For Me’, was a special tune because I got to write about her, that was the big positive thing in life at that moment that we were all clinging to.”

Although the band didn’t have as much involvement in the writing of the bare bones of the songs, they were creative when it came to bringing them to life on the record. “That’s one of those things, it’s changed so much over the span of our career,” Jon reflects. “There was a time when we were in college, when we were truly writing all the songs together, from start to finish in our little rehearsal space. For the first few records, we’d go off and be writing with a bunch of writers and have outside songs. A lot of times you would get to the session and you would have a guitar and a vocal, or a very remedial demo to kind of go off but the way that technology has progressed, you can write a song, and you might have someone in that songwriting session that’s doing some programming and, playing some stuff. By the time that you’re done for the day, you pretty much have a pretty legitimate demo that could almost be radio ready. It was the first record where we’ve got into the studio without being able to rehearse together. But that being said, because of the way we could send tracks, we were more prepared.” Another silver lining to lockdown for the band.

Chris adds, “Having a really fleshed out demo allows us to not focus entirely on the meat and potatoes of everything and get to take moments to stand out or to really add each of our own stamps on things. The way Records are made these days is so fast, you go in and you got to get a couple songs done that day. So there’s not a lot of time to hear the song and think about it, process it and then come up with a new idea. So to have those demos really helped us to put our personal stamp on the music.”

Each member of the band has a different favourite track on this record which sees Eli Young Band at their very best. “My favourite is a song called ‘Chances Are’,” says James, “I really had fun recording that song, it’s got a great groove. It’s going to be a fun one to do live. We’d like to crank it up a little more on stage.” Whilst Chris is drawn towards a song that takes the group in a slightly different direction than usual, “I think ‘Tell Me It Is’ is my favourite because it has a different kind of emotional weight and kind of desperation that we don’t usually have on our records.”

As they head back out on the road again, the four of them reflect upon the life changes they have gone through since first forming all those years ago back in college. “Well, we’ve had a lot of career moments but seeing all of us become fathers is probably the proudest moment,” Mike says. For Jon, he reflects on the times that weren’t so good for the band and takes comfort in the fact they stuck together and helped each other through. “I’m very proud of the four of us for sticking through the lows, from times where things didn’t go our way, a song didn’t do well on the charts, or we just didn’t catch a break and everything falls apart. The fact we’re able to question everything together and pick up the pieces and then move forward in a positive direction, I think is a big reason we’re still together after 21 years, but those are the moments where I think I’m most proud of who we are as a band.”

And the band have plans to visit the UK now too with plans put on hold through the pandemic, they are itching to restart those discussions and bring their show across the pond!