Encore: A Tale of Two 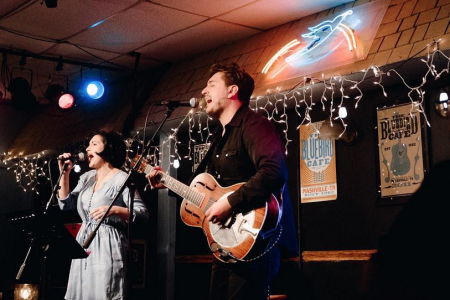 First song you learnt all the words to?

Stephanie: When I was learning how to talk I had a speech impediment, so I couldn’t say my R’s. I used to have a little tape recorder and I’d just sing and record it. The very first song I remember is ‘Froggy Went A-Courtin’. My Grandmother and I used to sing it when I was around two but because of my speech impediment the words didn’t come out right!

Aaron: I wasn’t much into lyrics when I was young, just the groove so it was probably Bohemian Rhapsody when I got a bit older.

Aaron: East Bound and Down.

Stephanie: When I think of touring and travelling, I think a bit more epic like a Beethoven symphony or something like that. We are way different!

A Live show that changed your life?

Stephanie: Probably the first time we sang together. Our first official gig together, we weren’t even a duo yet. We were just ‘these are my songs and these are his songs’. We went to Memphis, Tennessee to play like a kind of a mini showcase called South Main Sounds and it’s on South Main Street, right near Beale Street in Memphis. A friend of ours has these Friday night, songwriter showcase series. That was the first time we had actually worked together in that capacity. I was singing harmony with you, and you were singing harmony with me and we got a great response. Everyone’s like, ‘You know, you should really do more of this’. We started thinking, let’s write some songs together and that’s how we formed a duo.

Stephanie: I would have to say anything Madonna. He laughs at me all the time because when we do take a road trip, I put on my Pandora Madonna station and it gets me hyped to go, it was always on when I was a child.

Aaron: We have to listen to like 19 straight Madonna songs! For me I’d have to say The Cranberries.

Stephanie: Honestly, for me, I have such a love hate relationship with a song, Judy Garland’s ‘Over The Rainbow’. When you watch The Wizard of Oz when she was 18 and it had this beautiful hopeful sentiment and then you listen to the 1964 Carnegie Hall recording which I have on vinyl, and it went from hopeful to kind of like there is no rainbow and it just breaks my heart. So anytime I hear that song, I see both facets of an icon that really inspired me throughout my entire career.

Aaron: Carrie Underwood before he cheats that song drives me insane. Every time we drive by Broadway, here in Nashville, that song is playing in at least one bar!

Stephanie: That’s a good one! I remember when I really discovered Tina Turner, she was a strong woman and everyone talked about her being an older woman rocking it! I remember thinking, ‘Wow, I want to be like her.’ Every time I’ve seen her in concert, over like a 20 year span, she just never changes, she does the same dance moves, she looks the same, she sings the same. I’m just like, you’re amazing!