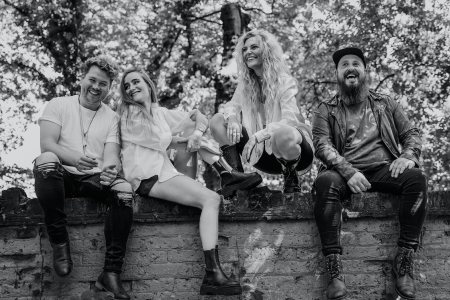 At the beginning of the year it was announced a new supergroup, First Time Flyers had formed pulling together four of the UK’s most talented homegrown acts.

Tim Prottey-Jones was the founding member of The Wandering Hearts who enjoyed much success with their debut album ‘Wild Silence’ and performed on legendary stages such as The Grand Ole Opry, The Ryman Auditorium, Bluebird Cafe, Graceland & Hyde Park. Tim left The Wandering Hearts to write with/for and produce other artists and to release his own material as a solo artist.

Jake Morrell recorded his debut single with London based producer Brett Shaw (Florence & The Machine, The Kooks & Dry the River). The song entitled “Wire and Thorns” reached No.2 in the iTunes country charts on the first day of release. This led to Jake being invited to perform at Country 2 Country festival, where he premiered his first major single, the appropriately titled ‘Englishman (Trying to Write a Country Song)’ – written with the Grammy-winning writer/producer Kipper.

Poppy Fardell is a Top Ten artist on the iTunes country charts, her pure honesty and spellbinding vocals instantly made her ‘one to watch’ and solidified Poppy Fardell’s place in the U.K. Country Music Scene. Turning heads at every corner, Poppy has been playing venues such as The Camden Chapel for a sold out headline show and again at female led writers round ‘Write Like A Girl’, The Water Rats, The Green Note & The Slaughtered lamb. Poppy’s debut EP ‘Better Start’ went straight to No.3 in the U.K. iTunes Country charts next to Taylor Swift & Eric Church.

You’ve all released music individually and have come together as a UK supergroup, where did the idea to do that come from?

Poppy: We’ve all been friends and supported each other for the longest time. I always knew it was something that could and probably would happen… I just didn’t know when. Then I got a text from Tim saying ‘Poppy’ (bare in mind, that’s not out of the ordinary… but I just knew and replied, ‘are we starting a band?’ and he said ‘yes’.
Vicki: I was sitting in a pub when Tim voice noted me asking if it was something I would be interested in. I couldn’t hear properly but heard the word ‘proposition’ and I dropped my pint and ran outside! It was definitely the right time to hear that message … the universe was listening to something ya know?! And I love all three of these guys having worked with them before so it was a no brainer!

Tim: Initially, Vicki was furious that I hadn’t asked her to marry me, but that was soon forgotten about. For me, the biggest thing was that I wanted to be surrounded by brilliant, trusted friends because those strong relationships mean you always have everyone’s best interest at heart which is so important when navigating this industry. These 3 are the very definition of my band mates.

The first time you all sang together, were there any nerves? Did you know you had something special?

Poppy: We have all sung together at different times through our solo careers. We’ve all written, performed and sang together in 2s or 3s prior to forming First Time Flyers, so we all knew it would work.
So we decided to record a few demos together, and because of that, knew instantly it would work. We booked in some writing & recording retreats and on our first one, we all stood in Jake’s parents’ kitchen in Norfolk, and sang a song that we’d written in four-part harmony. I remember looking around and seeing my best friends & feeling this joy about music that, honestly, I hadn’t felt in the longest time. And I think that was a mutual feeling amongst us all. It’s safe to say we will continue singing together for a very long time.

Tim: Having produced music for each of the ‘Flyers’ prior to the band, I just knew that the voices would blend and I knew the love everyone one of us had for harmony singing. But yes, the nerves were of course there, but only because I wanted it to work SO badly.
Vicki: I think I honestly was just so excited to sing together … I just remember literally beaming internally from the first second!

How did you decide on the name ‘First Time Flyers’?

Vicki: I was actually a pilot for my first job.
Poppy: We all jumped out of a window to see how it would go…
Jake: I went through so much paper to try and solve the puzzle of our band name! However, it was driving back to London, past Stansted airport whilst listening to one of my favorite bands NEEDTOBREATHE. I thought, that’s a cool name, maybe we can come up with something like that. Then it just came out of nowhere (the name, not a low flying aircraft). Sent it to the guys and after I bribed Vicki with a promise of Rich teas for life. We had it.
Tim: I wanted to lose the ‘e’ in Time.

Poppy: Songs have honestly never come so easy. We have a very relaxed approach, and have all written a lot as solo artists, so we know you can’t force this stuff. However, songs seem to just appear in front of us, and we all get so excited about piecing it together. We laugh, we cry… I have 2 coffees, Tim gets to building a track, Jake & Vicki fight over chords and there we have it..
Vicki: Yeah, I always want ‘weird’ chords and Jake says no! I’ll keep trying!
Tim: The beauty of writing as a group is that you’re allowed an off day…
Jake: When are you due an ‘on’ day?
Tim: 2027.

Tell me about the debut single, what’s the story behind ‘Happier’ and what was the recording process like, especially since you’ve had to keep it quiet?
Tim: We wrote the track with the brilliant Kaity Rae after swearing her to secrecy about the whole project. We wore disguises & used pitch altering software on our voices so she wouldn’t know who we were working with. Seriously though, for our debut single, we wanted to capture everything we loved about music, essentially, imagine the audio equivalent of Fleetwood Mac & Lady A playing Sardines….
Jake: The song itself is pretty well summed up in the pre chorus with the lyric “Said you needed space and I’d give anything to you” which basically means I gave you the space you said you needed so I hope it makes you happy because I’ve sacrificed my own happiness for you.

Tim: And if you come back saying you were wrong I’m gonna be miffed because I feel really naff right now!
Vicki: Alright Grandad!
Tim: Rude. As for the recording process, it all came together really quickly after the writing session to be honest. The vision was so clear and it really helped shape the production. I always think that when four-part harmonies just instantly come together without conversation or much preparation, then you’re on to a good cohesive song!

You have a big performance to mark your first public appearance, how excited are you for that?

Vicki: I am actually beyond buzzing for this because it was on my 2023 goals list before I was even involved in the band. I’M CHUFFED!
Poppy: Our first public performance is going to be huge for so many reasons, but the fact we get to play where we are playing… Yeah, that’s special.

Vicki: And with these 3 next to me … even more special!
Tim: It has prestige, so we are ridiculously excited to bring our very best show!

A fun question for you all, if you were to each have a different super-power, what do you think it’d be?

Vicki: I’d make Jake agree with everything I say.
Poppy: Tim would have the power to play every instrument under the sun… oh wait?
Tim: Are you flirting?
Jake: My superpower would be to make Tim actually own all the instruments he plays! Or like flying, that’d be cool.

Tim: If I could have any superpower, it would be to make other people punctual.
Vicki: Guilty!

What’s next for you all?

Vicki: Right now, a cup of tea and a rich tea biscuit … but then after that maybe … world domination? Haha!
Poppy: We have a very busy year ahead, which of course includes rich teas, being very silly with these Flyers… And yes, what Vicki said. I honestly cannot wait for what’s in store, all we need now is a willing audience to share our time & music with!
Jake: Urgh… give me a hobnob!
Tim: Let Dad take this one…so, we want to be writing and rehearsing pretty consistently for the first half of the year so we can tailor our live show to a variety of tours and festivals and really explore our working relationship with Wasserman and their incredible roster of artists. We have so much great music to put out too, so, releasing music & touring sounds like an ideal 2023 to me!