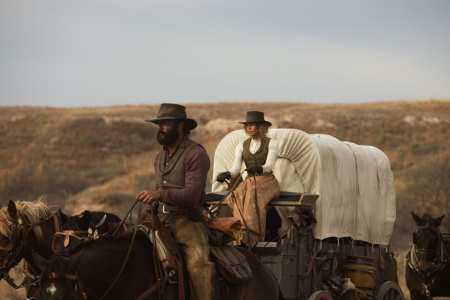 Tim McGraw and Faith Hill have been the King and Queen of country music for a long time. Having been married over a quarter of a century, the pair who have three children together, have wracked up countless awards and sold millions of records worldwide both as solo artists and as duet partners. However, recently they’ve been duetting in a slightly different artistic format as they play husband and wife, James and Margaret in the Yellowstone prequel, 1883. At the end of June, UK fans had the opportunity to stream the series for the first time on Paramount+.

The western drama created by Taylor Sheridan, who also created Yellowstone was a huge success in the duo’s native country and it featured a number of esteemed actors such as Sam Elliott. It tells the story of how the Duttons came to own the land that would become the Yellowstone Ranch.

Faith Hill from Mississippi and Tim McGraw from Louisiana were both immediately drawn to the script and story. Faith, having grown up singing on the rodeo circuit was eager to taste a different side of the western life. “It was the writing, it was the script that drew us to 1883,” she begins, an excitement in her voice. The duo flew in to London for the premier and were keen to talk about the filming process. “I had never read anything quite like it to be honest. It just was one of those moments in life where it was the perfect storm, we had the time, the material was absolutely phenomenal, the Director too – it just made sense. We just felt like the luckiest people in the world to be honest.”

Though 1883 wasn’t Faith’s first acting job, it was her biggest and most in depth role to date. “Taylor Sheridan, who wrote 1883 gave us kind of a warning that it was going to be a difficult filming process. Tim and I both said that we were unafraid of hard work. We’ve done that our whole life but I will be honest, and say it was probably one of the more challenging things that we’ve ever done.” James Dutton, played by Tim and Margaret Dutton, played by Faith both make explosive entries in that first episode and it is clear from the start that the skills needed were beyond just delivering lines and projecting emotion; there were wagons to ride, weapons to shoot and stunts to be executed. In a recent interview, seasoned pro Sam Elliott even remarked how difficult it was to film.

“It was that way for everyone in front of the camera,” Faith continues, “Most importantly, we had the most amazing crew and wranglers, everyone that taught us how to do all the things that we needed to learn to make it as authentic as we possibly could.” The new skills Faith learnt during the filming process tested and challenged her but also gave her experiences that she’ll hold dear for the rest of her life. “Driving the wagon, it’s something that I never, ever thought I would ever do or even consider doing. And I found that I was actually really good at that. I don’t have one though, at my home, so I don’t know when I’ll do that again but I would like to.”

One skill they can enjoy together as a family is horse riding, “Tim has been riding horses before he could walk. When you are out in nature, like that wide open space on a horse, there is absolutely nothing like it. So that is something that we’ll find time to do more of.” Whilst there are other things that come as blessed relief to Faith that she doesn’t have to do it again, “Well, I’m glad I don’t have to wear a corset! I learned how to put a corset on and I’m very grateful that I don’t have to do that everyday.”

The pair have been on four tours together now and have released an album called ‘The Rest Of Our Life’. However, working together on this show was a whole new ball game for the duo who had an unusual style to working together. “ In order to keep it fresh, spontaneous and authentic, for me, personally, it was important to not run lines together, or to even talk about the scenes that we were going to work on, I couldn’t do it. He’s acted a lot before, he’s been in a lot of things. But I just thought in order for us to be surprised, perhaps bring an authenticity to my character Margaret and to his character, James, it was important that we met one another on set when they call to action. That was the first time I heard him say his lines to me and vice versa.”

In all, they were just excited to share this with each other and it’s an opportunity that’s been a long time coming, “We’ve been approached to do things in the past, to do something together on film, but it just hasn’t been the right thing. We really weren’t looking for anything and then this came to be. We have been together for so long, we’ve been married 26 years this year and three daughters later, we’ve worked together, recorded together but this was something we’ve never done.”

Though this was unlike anything she had done before, Faith drew upon that same muscle memory that she uses to remember her lyrics on stage when it came to learning her lines but her mindset had to change in order for those lines to sound more like Margaret than Faith. “It is most important, that you definitely know your lines. It’s just muscle memory to be honest, it’s just, work as hard as you possibly can and know the words so that they become Margaret’s words, and not something that I’ve just memorised as material.”

The journey through music

Though the focus is very much on promoting the TV show at the moment for both Tim and Faith, she teases that there are irons in the fire. She’s achieved a lot since her career began in the early nineties. Faith got her start in music at The Bluebird Cafe. She was spotted by Warner as she sang back-up for songwriter Gary Burr. Tim tells me what the sacred venue still means to the whole family, “Some of the greatest songwriters and artists to come out of Nashville play there, it’s fun to go sit and watch some of your favourite songwriters play. It’s not too far from our house so every now and then we’ll get to sneak down there and see somebody really cool that we like. We’ve taken our daughters in to see some of our favourites. So anytime Lori McKenna is playing there, we try to make it.”

Back then, Faith had big dreams when it came to her music career, “I had a pretty good imagination when I was young, my mind can go off into Wonderland for sure. But I have to say, I never imagined all of this, it’s been extraordinary. My whole career, life, everything. I’ve been very, very blessed. And I’m very, very grateful.” Her first single ‘Wild One’ raced to the top of the charts in 1993, where it stayed for four weeks. ‘Piece of my Heart’ followed and once again topped the chart. Meanwhile, Tim’s debut album came out the same year as Faith’s but was struggling to find its legs but all that was forgotten with his second album ‘Not A Moment Too Soon’ and he went on to hone his musical identity on his 1997 album ‘Everywhere’. Shortly before the release of the latter, Tim and Faith married. The pair began singing together occasionally and duets such as the chart topping ‘It’s Your Love’ became fan favourites.

Faith’s biggest hit of her career came in 1998 when ‘This Kiss’ penned by Annie Roboff, Robin Lerner and Beth Nielsen Chapman topped the charts. “First of all, Beth Nielsen Chapman is an extraordinary woman as a singer, songwriter, she’s incredible,” Faith gushes. “When I first heard ‘This Kiss’, I couldn’t believe it. I thought what have I just heard, I was floored. It took me years and this is the honest to God truth, it took me years to feel comfortable singing it live because it is a very difficult song to sing. It’s one of those that you can sing along with and it seems simple but singing it night after night, that was a muscle memory that took me years to feel like I had finally got it. So now it’s actually more enjoyable to sing now, than it was when it was a hit. I’m glad that they wrote that song and saved it for me.”

Meanwhile, Tim was dominating the country charts year on year with songs such as ‘Just To See You Smile’ and ‘Something Like That’. In the early 2000’s, Faith had a crossover hit with the Diane Warren song ‘There You’ll Be’ which featured in the film Pearl Harbor. Turned down by Celine Dion, Faith and her team saw potential in the track and her powerful vocals allowed it to soar to new heights. It got to number 3 in the UK charts and became her most successful song in Europe, allowing her to connect with a new audience. Not long after, alongside releasing records, Tim got the bug for acting and excelled in films such as ‘Friday Night Lights’, ‘The Blindside’ and ‘Country Strong’.

Whilst raising children and managing their own solo and acting careers, Tim and Faith headed out on co-headlining tours together four times. In 2017, they released their first full length album together called ‘The Rest of Our Life’ which featured songwriters such as the previously mentioned Lori McKenna, Jessi Alexander, Jon Randall and Ed Sheeran! The album topped the country charts and sold 98,000 copies in it’s first week. This was a couple destined to be together, to work together and dominate their fields together. It was only a matter of time before they tried their hand at dominating the small screen together too.

The amount of times I have seen Tim act, I was not surprised at how well he portrayed the character of James, although we do see him in a fierce and more intense role this time. However, I was surprised with just how brilliant Faith was in the role of Margaret. The chemistry between the two comes naturally of course but Faith stands for no messing as Margaret and has a strength and fieriness that she beautifully portrays.

1883 could open a world of opportunities for the pair and they do appear to have a lot of projects up their sleeves. Faith ponders her career so far, as I punch her on what has been her proudest moment. She sounds amazed as she reflects on her own achievements. “Oh, my gosh, my proudest moment in my career so far – wow. I’ve been fortunate enough to do a lot of things that it’s just hard for me to answer. I would say the fact that I’m still working and I’m working hard, and there’s more to come. I’ve been fortunate and I work with great people around me.” ‘There’s more to come’, she teases, a smile audible in her voice!

Whatever comes next for the pair is bound to excite and amaze fans, just as this latest project has. The reigning King and Queen of country are on top of the world right now, their love for each other, their family and their illustrious and varied careers has never been stronger and the world is very much their Oyster.