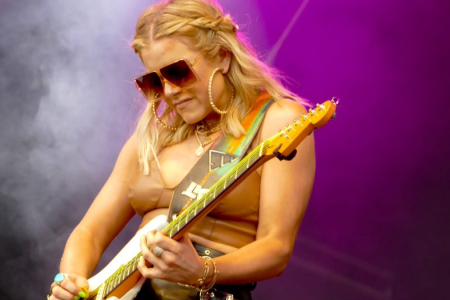 Lindsay Ell played an incredible, high energy set at The Long Road back in August. Her phenomenal guitar playing skills have mesmerised me since the very first time I saw her play in England, nine years ago. She’s the full package, great musicianship, powerful vocals and songs that speak to your heart and when she gets on stage she knows how to entertain. I couldn’t wait to catch up with her again after her set to see what the next chapter holds for Ell.

What’s you favourite thing about coming to the UK?

The fans here are unlike any other place in the world. They are just so dedicated and passionate and love music and it just makes such a difference.

I remember seeing you for the first time supporting The Band Perry in 2013. I’d never heard your music before and I was blown away. But you’ve been on quite a journey since then, I wondered if you could reflect on that?

That was my first World Tour in 2013. It’s been amazing to tour around the world for nine years since then. We’ve been back to the UK, I think seven times now. And it’s just so much fun to be able to wake up and do what I love and call it my job. It’s something that I will never take for granted. If anything over the pandemic, not that we ever took our jobs for granted, I think we realised how special live music really is and how fast it can be taken away from us. So it’s been an incredible journey. I just cannot wait for the next 30 years.

The last time we talked, you were about to release ‘Heart Theory’, it was your most personal album to date. Was you nervous about that release and how did you find the reaction to that?

I think that as artists and as songwriters, when we can be most vulnerable, that’s when you can connect to people the most. So it’s scary to go to some of those places, specifically talking about my story as a little girl, being a survivor, and some of the things that I just never would have said on my first album. But I think that’s also where the magic is, I think that music is this beautiful thing that connects us together as human beings on this planet. Regardless of what language we speak, or how young or old we are, where we come from, we can all feel the same things that a song is trying to say, and being able to feel those things at a music festival, is even more magical. So it was definitely my most vulnerable album to date but I think that’s really the only way to do it. As I’m working on my third album, that’s definitely the vein I’m in.

Can you tell me the story behind your current single ‘Right On Time’?

‘Right On Time’ is a song that I wrote at the beginning of the pandemic, and I was feeling like I was falling behind. So many of my friends were getting married and having babies and checking all of these life boxes and I was not close to doing any of those things. I was sitting in the four walls in my house by myself, I was single at the time and I was just like, Man, did I miss the memo on how you’re supposed to do life? After a few days, I was like, no, it’s so important to remind ourselves that we are all doing our own thing on our own trajectory. I think specifically as women, we can feel so much pressure to hit the right time of our life, maybe be a mum, to be beautiful, to go after the career we want. There’s all of this pressure that we feel coming from every direction, from family and friends, from social media, and it’s a lot to take in. I just think it’s really important to remind ourselves, I’ve arrived on time, for me first and foremost. Things are happening in your life and falling into place at the right time. Somebody else is on their own story and your story shouldn’t look like theirs. You can never be late to your own party.

You mentioned the next record, what can you tell me about that?

I’m so excited, we’ve been in the studio a lot and I’ve been writing a lot over these past two years. I’m just so excited to be able to release this next album. ‘Right On Time’ is obviously scratching the surface of that. But we’ll have a song out this fall with the album to come next year.

We don’t often see many people who can play guitar as good as you, but particularly women. There are many young girls looking up to you, what message do you have for those fans?

I am so inspired when anybody comes up to me, but specifically young girls that say, thank you for doing what you do. You’ve inspired me to start learning the guitar. That is one of the coolest things that a fan can tell me. I’m just so grateful. The fact that I remember the artists who inspired me when I was little, and the fact that I’m carrying on that torch and passing it on. It feels like I’m doing my job.

So, now for a silly question, if they were to make a movie about your life, who would you cast to play yourself and what would be the opening theme tune?

Oh, I love these questions. I mean, the first person that came to mind was Jennifer Aniston just because I’ve watched her ever since I was a little girl, and she was my favourite character in friends. Then the theme song, I’m just gonna say the first thing that came to my mind, RESPECT by Aretha Franklin, because I love the sas in it. I also love what it says. I think that so much of my life has just been pursuing and looking for that respect in places and teaching that, communicating that message on stage. I think that’d be like an epic soundtrack.

This year, I’m so grateful we’re playing so many shows and doing a lot of international stuff. I just finished a tour in Germany. We’re on tour with The Cadillac Three in the UK. Then I’ll go to Canada and play some shows. Then we go to Australia and play a few shows. Then I’m back in the studio to finish my third album. So it’s gonna be a really exciting rest of the year with lots of new music and a tour to come next year.