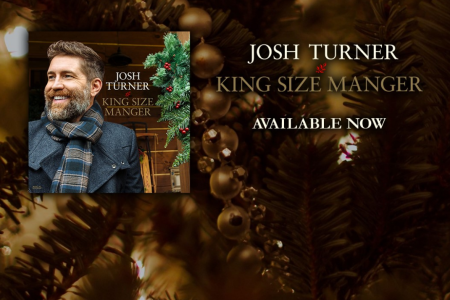 How long has this album been in the pipeline?

I’ve been wanting to do a Christmas album for a long time. Our first meeting for this record was back in January of this year, we narrowed down the songs and started recording in April and it took 22 days. That’s the fastest I’ve ever recorded an album.

How do you get into the Christmas spirit in the studio at that time of year?

Sometimes you don’t, it’s really hard. I was joking with the musicians when I went into the studio, they kept telling everybody to just have cold thoughts, think about wintertime. I actually did the photoshoot in April and it was like 80 something degrees and it was pouring down. So it was amazing that we actually were able to get the photoshoot done.

How did you choose the songs for this album?

My favourite christmas album was Randy Travis ‘Old Time Christmas,’ that always served as my template for when I made my christmas album. I sat down with Kenny, my producer for about three hours and played through everything I know, some originals I had, bits I hadn’t finished. He came back to me with his favourites and it was so not what I expected. His first choice was Mele Kalikimaka My Ohana which is a song that I wrote back in 2013 by myself. It was not long after my wife, Jennifer and I had gone to Hawaii, I had bought a couple of ukuleles that I was in love with. For me, every time I get a new instrument, there’s songs in it and I’ve tried to find those songs and this is one of those. We looked down the list and most of them focus in on the reason for the season, and the true significance behind Christmas. I was so proud of that, because not only were we being creative and and making it a fun, energetic record, but we also had a lot of depth.

What traditions did you have growing up that you’ve now passed onto your children?

I think the biggest thing for us is just trying to take time off because we spend most of our year just travelling. I think it’s important for my sons to know that when it comes time for Christmas you really focus in on what this holiday is about and to truly celebrate it you’ve got to take time off, it’s about family. It’s important for them to spend Christmas Day at home, we go to church. We carve out time to watch all our favourite Christmas movies, we cook good food and spend time outside especially if it snows. It’s just taking time off from work to be together as a family.

What’s your favourite Christmas present that you’ve ever received?

Oh man that’s a good question. It was probably one of two things, back in 1989 I got my first four wheeler that was the only thing I had asked for that Christmas and so I come down Christmas morning and I’m opening all my presents and there’s no sign of a four wheeler anywhere and so I was kind of disappointed. I’m trying not to show it and my parents could see that I was disappointed, I think I was 12 years old at the time and so my parents said well “You haven’t checked your stocking yet” and so I reached my hand in and there’s a key in there to a four wheeler! I got so excited, they hid it in the garage. It had actually snowed that Christmas there in South Carolina which, it never snows in South Carolina but I got out on the four wheeler, I go cutting across these fields. I had no idea that there was a ditch running through one of these fields and so I ran straight into the ditch the four wheeler comes to a complete stop and I go flying off it like Superman! That was the only time I ever wrecked it but that was one of my favourite Christmas gifts. Then if you fast forward, my parents had bought me a brand new guitar and it was so much easier to play than the one that I learned how to play on and so I was playing that thing every day!

My mom would always make these chocolate balls. I’m trying to think of the ingredients but I think it was like peanut butter and dates and something else, I don’t know if you would put like oats in or what but then she would roll them up into a ball and coat them with chocolate and they would end up in a big bowl, those things were so addicting so that that was probably my favourite go to Christmas time thing.

Josh is currently on tour doing a mixture of his past hits as well as a few festive numbers in the lead up to the holidays!