Getting to know Jameson Rodgers 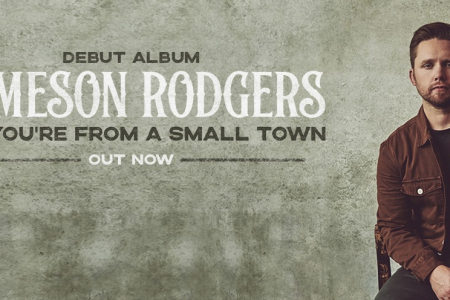 Here at Maverick, one of our favourite records released so far in 2021 comes from Jameson Rodgers! I was eager to catch up with the Mississippi native who had a number one hit last year with his song ‘Some Girls’. The future looks bright for Rodgers as this record is already getting rave reviews!

When did you first realise you wanted to be a musician?

As a kid I always loved to sing, with 90s country and all that stuff growing up. For whatever reason, I was a late bloomer, with picking up the guitar. I was always walking around High School singing songs in the hallway and stuff but I didn’t pick a guitar up until I was in college. I should thank Eric Church for his very first album, because it lived in my truck for like two years. I didn’t know that was a lane, you could go down as an artist and as a songwriter. That first album, first two albums really, were a huge inspiration of mine, along with 90s country and classic rock.

What did your parents play to you when you was growing up?

My dad was a huge traditional country fan – George Jones, Merle Haggard, Conway Twitty, all of that whole era. In car rides, it was mostly Country radio back in the day. I listen mostly to the stuff that I grew up listening to. I’m a creature of habit.

What’s the songwriting process like for you, is it different every time? Do you draw mainly from personal experience?

There’s a story or there’s a memory from Batesville, Mississippi, the town I grew up in, in just about every song, a little picture in every song from my childhood growing up. I do like to keep a lot of ideas written in my phone, like in the note section of my phone and Yeah, most of the time, I’d say 90% of time, it starts with a title or an idea. The rest of the time it starts with like, a musical idea or a melody idea.

Your song ‘Some Girls’ became your first number one – congratulations! What’s the story behind that song and how did it feel getting to the top of the charts with that?

I moved to town to be a songwriter and I didn’t even write my first single, I didn’t write ‘Some Girls’. When you’re coming up in Nashville over the years, you come up with other artists and songwriters at the same time, almost like a class. So me and Hardy and Jake Mitchell and CJ Solar and so many other writers kind of came up together, coming through the trenches together with nothing going on. So, several years ago, if you can imagine a time where Hardy didn’t have a hit song under his belt. He had written Some Girls and it somehow ended up in my phone. We used to share demos with each other back in the day and I used to just always tell them, if nobody ever cuts that song, I would love to have it someday. Somehow it fell through the cracks, and I got to do it. The moment I knew it was going number one, I was actually back home in my hometown, which was pretty cool. I was with my dad, he has been my biggest fan since day one. It was a pretty emotional day. Just because I’ve worked so hard over the years. There’s times where it seems like it’s impossible to get to that point. So I’m super thankful.

How did the collaboration with Luke Combs come about?

I met Luke back in 2016, before he blew up huge and became one of the biggest artists in the format. Over the years, we were just buddies, we’d write together here and there and back in 2018, he was really starting to blow up, he hit me up and asked me to go on tour with him. I got to go out and open up all these arenas and stuff with him. I was in the studio recording ‘Cold Beer Calling My Name’, I had no intentions of ever being a duet but after we went in the studio, I was like, man, it would be cool to have a feature on this first record. Luke had just asked me to go on tour, I know he likes drinking cold beer, like myself and so it just made sense for me to ask him and luckily, he said yes. It wouldn’t be the same without him for sure.

What advice do you have to aspiring songwriters?

I would say, be patient, for sure. Keep your head down, show up every day, try to write a song every single day and just try to find a group of people that you just like writing with. It’s just more special and more fun when you get to share the success with other writers, with other buddies. That’s what’s been the coolest part of my career is getting to have my circle of 10 or 15 buddies, all having success at the same time. It’s been a really cool part of it.

If they were to make a movie about your life, who would you cast to play yourself and what would be the opening theme tune?

There’s a new show called The Resident on TV. Somebody said ‘the lead actor [Matt Czuchry] looks just like you, he could be your doppelgänger.’ So we’ll go with that guy. The opening theme song would have to be ACDC ‘Thunderstruck’.