Getting to know Travis Denning 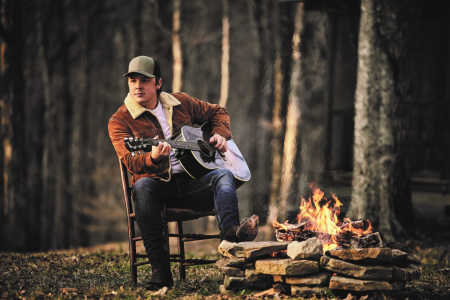 Tell me when you first knew that you wanted to be a musician?

I started playing guitar when I was 11 years old and it was just the first thing that I really grabbed a hold of. I played sports as a kid, but I never really found what I really enjoyed doing. The guitar was the first thing that I got my hands on that I could wrap my head around a little bit for some reason. I was getting better at it at a pretty normal pace. I just kind of fell head over heels in love with it. When I was 14 years old, that was the first time I ever stepped foot on stage and I just was like, okay, this rocks. I don’t want to do anything else.

When it comes to your own songwriting, where do you like to start? Do you always start from a lyric? Or is it just different every time?

It all starts with an idea, whether it’s a hook or a title, I got to have something I can mentally grab on to. And for me, that always starts with a hook or just something that we know we’re writing about. So once we get that, then we start thinking, well, musically, what do we want it to sound like? And would it be mid-tempo or a ballad?

I want to ask you about your first number one After A Few, tell me the story behind it and what it meant to you to get to number one?

I wrote that song with Kelly Archer and Jessica Weaver, Kelly had the title and she was like, I think it’s all these things that are after a few you know, drinking songs, minutes of conversation, whatever it is – man, she rocked it that day. I mean the melody was hers and I was just hanging on for dear life. I had the guitar lick and knew how I wanted the song to come out. Once we demoed the song I thought this song feels like a hit. It’s probably the biggest accomplishment of my life so far. Not only as an artist to have a number one song, but to be a songwriter and have a number one song meant the world.

You mentioned there about being a songwriter, and not just an artist, is that something that you want to continue doing throughout your career?

I always want some cuts. The reason I love doing it is because it still challenges me as a writer to think outside of the box. If I co write those co writers are expecting us to write a song for me, I love focusing on myself, but there’s also something cool about thinking well I wonder if this person would record it and it’s such a cool validating thing, when you do get a song recorded, because I think it just shows that you still have a place in the songwriting community.

So this record, that you just released, it features that wonderful song ABBY on it. I wonder if you could tell me a little bit about the story behind that song?

That’s a song that a buddy of mine played for me and I just laughed my ass off. I heard it and I thought it was the funniest song ever. It also felt really big. I was like, this could be such a big moment live. And I fell in love with it. I knew who the Songwriters were, and I called them up and asked if I could record it and they gave it to me.

You spend so long planning a record and what it’s going to sound like live and then you’re not able to tour it? How has that affected you?

We definitely faced that with the first EP, it came out in May of last year, and the whole world was just up in flames pretty much, it was difficult. You worry if anyone’s going to care about it when we do go back on the road. Ultimately, I found myself leaning on new music from artists I love during the pandemic, that gave me a little reassurance that hopefully a lot of other people were doing the same thing. I thought about when we get back out there, what do I want to play live?

That’s a great question. There’s definitely been some drunk, not safe for work, parody songs I’ve written with some buddies. I’ll say the one I can definitely talk about is, I wrote a song to the tune of ‘Do your ears hang low? Do they wobble to and fro?’ An old nursery rhyme song and it’s ‘Do you drive a truck?’ It’s very stupid and funny and I think it’ll probably come out at some point. It’s got some big, silly Tick Tock energy to it. So maybe I need to try and make up a dance or something to it.

If they were to make a movie about your life, who would you cast to play yourself? And what would be the opening theme?

I think the opening song would probably be Kickstart My Heart by Motley Crue, we’d have to start off with that one. I’d definitely cast somebody handsome like a young Leonardo DiCaprio!