Hailey Whitters: In the writers room 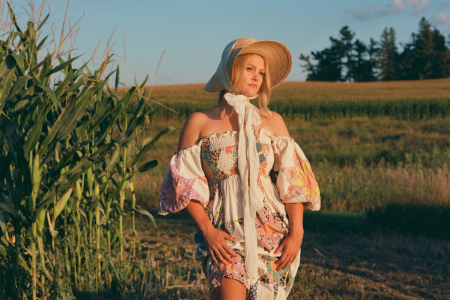 Hailey Whitters released her breakthrough album ‘The Dream’ back in 2020 but the singer-songwriter has been quietly plugging away in Nashville for a number of years. As she releases her next album ‘Raised’ the stars are finally beginning to align for the Iowa native who has recently received two GRAMMY nominations for songs written for other artists. With her performance at Country 2 Country festival imminent, Whitters sat down with me to discuss her recent success and where it all began.

For Whitters, it all began in her father’s fields out in the country in Iowa. “I used to ride on the back of Dad’s tractor while he worked in the fields and I used to sing to myself, I was so influenced by country radio,” she begins to reflect. Her parents, though not musical themselves, played country music around the house, “My dad used to like a lot of old country, Hank Jr. and Willie Nelson and went to a lot of those concerts. I don’t really remember music being a super centric, focal point or anything for any of us. It was just driving in the car and the radio just happened to be on country. So that’s what I was hearing. At that time, it was Alan and Tim and The Chicks and Trisha and Faith Hill and Martina, voices like that.”

“I remember a memory of being in elementary school and going into my guidance counsellor and asking how I could be a country music star. He had told me to start writing my own songs. That’s the first time that the switch went off of, maybe I can do this, I’ll start writing songs.” The belief and support she received from those at school alongside her parents propelled Whitters forward. It was when she got to Nashville however, that the real fire started burning within her. “One memory that sticks out is probably coming to Nashville for the first time and getting to go to the Opry, seeing the lights come on and the curtain go up. That was a moment, it just hit me in my gut, like, you are going to do this. So those are probably the two most cognisant memories I have of committing to country music.”

Now Whitters will bring her music to a global audience as she performs at Country 2 Country in London, Dublin and Glasgow. “Getting there and playing for my fans, it’s been a long time coming,” she says. Britain’s reputation proceeds it as well as Whitters knows what to expect after hearing so much about it from her friends. “All my artist friends here in town have been telling me for years, you got to get to the UK, you’re going to love them. They’re going to love you. I’m very excited that it’s in less than a month, it’s finally going to happen. I’m so appreciative of my UK fans for sticking with me all this long. Because it’s been so many years that they’ve been asking me to get over there.” Whitters will be coming to the UK just days before her next record ‘Raised’ hits shelves on March 18th. It’ll be a chance to showcase some of the new songs she’s been working on.

The record draws influence from her roots and takes us back in time to her childhood. The album is book ended by this instrumental and that’s where Whitters begins the story of crafting the album. “I remember my producer wrote the opening prelude to the record, it felt very cinematic. This record is very much about my childhood and going back to that place that raised me and so I think it sets the scene like the opening credit to a movie does.” She wrote with a number of prolific writers to craft this album, from long time collaborators such as Lori McKenna and Bryan Simpson to some newer names, “I feel like there’s a lot of new co-writers on this record; the likes of Bobby Pinson and Tom Douglas. I like to change things up, I like to write with new people and Tom and Bobby were both people that I really, really wanted to write with. I really like to just write with people I’m inspired by, I think that it’s as simple as that when it comes to songwriting.”

A particular stand out on the record sees Whitters team up with Brandy Clark and Jessie Jo Dillon to write the song, ‘Boys Back Home’. “I was just thinking a lot about the boys that I grew up with in high school, I got my first kiss from one,” Whitters reflects fondly. “We had this place that we used to go to, it was like a rite of passage from the upperclassmen, and it was called the Greencastle, and I can’t even tell you how to get there. We’d all just get in the back of someone’s pickup truck and someone would know the way down all these washed out dirt roads, to this clearing in the woods. We’d all tell our parents we’re staying at each other’s houses and someone would pick up a bottle of cheap Hawkeye vodka and a case of beer, and we’d go to this clearing in the woods and just sit around a fire and turn up some Alan Jackson and stay up all night.”

“Those boys, they’re like, brothers to me,” Whitters continues as she confirms that it is one of her favourites on the record too. “They taught me to drink, they taught me to fight, they taught me to stick up for myself, they bail you out of anything. They were a very big part of growing up for me. So this song to me is a way to just kind of celebrate them and thank them for, kind of raising me, I guess.” The song is beautifully written, with some phenomenal lyrics that really tell the story and set the scene.

Hailey Whitters and Brandy Clark are a bit of a dream team at the moment, having had a lot of success in recent times. Not least are the GRAMMY nominations they have received for two of their co-writes. ‘Same Devil’ which appears on the deluxe edition of Brandy Clark’s ‘Your Life Is A Record’ and which features Brandi Carlile, is nominated for Best American Roots Performance whilst ‘A Beautiful Noise’ performed by Alicia Keys and Brandi Carlile is nominated for Song of the Year. “I was eating breakfast at a coffee shop, and Brandy called me. I could tell because she just said, Hailey and I could tell it was going to be something. I didn’t know if it was good or bad yet. But I literally just said, ‘give me a minute, I got to get out of this coffee shop, because you’re either gonna make me scream or cry and I don’t know which one it is right now. So I got to get out of this public place real quick’.”

She laughs as she recalls the moment Clark told her the news, “I got out and she told me and I screamed, I could not believe it. She had actually called me about ‘Same Devil’ first, that was up for like Americana Song of the Year or something. It wasn’t until a few hours later that my phone started blowing up. Everyone else was like, holy crap Song of the Year, then I realised ‘Beautiful Noise’ was up.” It hasn’t really sunk in yet for Whitters who just feels privileged to write with those writers. “It doesn’t feel real. I just think that I’m so lucky to have gotten to be in those rooms because there’s just so many brilliant minds there. I kind of feel like a fly on the wall in a way because I can’t take any credit for it. What do you expect when Brandi Carlile, Lori McKenna, Hilary Lindsay and Brandy Clark are all on a song together, you know?”

Whitters has had a number of cuts for other artists such as Little Big Town, but whether she is writing for her own records or for someone else’s, it’s all about crafting the best song. “What’s crazy about the cuts that I’ve had as a songwriter was that, we were just writing for the sake of the song, we’re just writing to try and write a great song.” Whitters tells us how ‘The Older I Get’ came to land on Alan Jackson’s record, “It wasn’t until we finished that song that my co writer in the session, Adam was like, Man, I should send this to Alan, I think he would like it. So I don’t know if he was thinking about Alan when we were writing it, but I definitely wasn’t, I was just thinking, it’s a song about getting older, let’s just write it to the best that we can. I think that’s probably the way that I always approach songwriting.”

As for the lyrical inspiration, Whitters is a master in the art of observation; “I consider myself a professional people watcher,” she laughs. “I love to just watch and observe and whether that’s, sitting at the mall, and watching characters and just kind of creating these stories about their life or whatever, or whether it’s a friend or relative or something that they’re going through at the time. Those storylines will fall into a song somewhere.”

As she hones that craft of storytelling, ‘Raised’ showcases how far Whitters has come as a writer and artist and gives fans more of an insight as to who she is as a person. 2022 is bound to be a big year for the songstress as she sets her sights on country radio too. “I’ve got a tour, a headlining tour going on right now and I’m going to the Grammys. I just hope this record has a beautiful life as well. I hope fans love it just as much, if not more than ‘The Dream’. I can’t wait to see the things that we’re able to do with this record. Maybe we’ll bust open a door at country radio for us here in the States.”

After touring with Little Big Town and Maren Morris, Whitters has developed her live show and fans at C2C will be mesmerised by her set as they hang off her every word. Bringing these new songs in her suitcase, Whitters will be one of the stand-outs at the festival.