Rodney Crowell: It all starts with a song 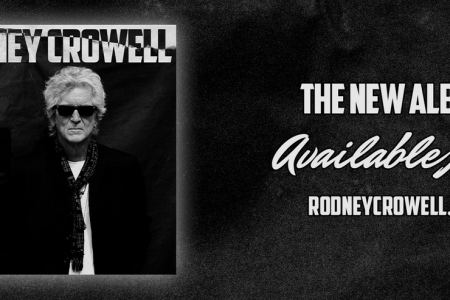 On the brink of releasing his 18th studio album, prolific hit songwriter Rodney Crowell shares his thought process behind the making of ‘Triage’

Rodney Crowell’s career as a songwriter and artist has spanned five decades and the 70 year old Texan shows no signs of slowing down yet! In fact Crowell has proved that not only has he still got it with his new album ‘Triage’, but that he’s the best at it.

78’s in their dust sleeve

Crowell came from a very musical family, with his dad and grandparents all playing different instruments and performing locally, so it seemed he was always destined to explore music himself. “The first instrument I was invited to play was drums, my father brought home a cheap pawn shop set of drums when I was around 11 and he sat me down and showed me a little bit.” Crowell begins, “My father was a guitar player and a singer, he had a honky tonk band that played country music, traditional 40 and 50s hit country songs. So on a Tuesday and Friday night I played in a Texas Honky Tonk, very poorly, lets not sugarcoat it but I was there and it was one less musician he had to pay!” Crowell laughs. There was always music around the house and his parents encouraged and facilitated his passion from an early age. “From a very young age I learnt how to operate a small record player that my parents left on the floor with 78’s in their dust sleeve lying next to it that I could play. I was listening to Hank Williams continuously from around age 4. When I became of age, your British lads had taken over the world and that music resonated with me at that time too.”

Crowell explored all aspects of the industry from writing, performing and producing but it was always the crafting of a song that Crowell was drawn to more than anything. “It’s my favourite aspect of the industry and simply because it all starts with a song. If The Rolling Stones didn’t have Honky Tonk Women to take into the studio and record, we wouldn’t have that glorious performance. You Are My Sunshine, the governor of Louisiana wrote that I think but it really does start with a song!” We often refer to the craftsmanship of writing a song but nobody quite crafts it like Rodney Crowell who writes and writes and then moulds it into a hit later! “I write alone 85% of the time. Thats just because I’m sitting in my home studio, I wake up in the morning and start drinking coffee and continue working here. If I’m not on the road that is, I’m in here 6 out of 7 days a week because thats how I get things done and I love it. Sometimes songs come quickly and other times it’s reams and reams of pages long with lots of verses that need to be whittled down.”

For Triage, Crowell had a clear vision of what he wanted to say with each song. “Triage the album was an interesting writing process. Basically the ideology going on inside my head or my heart, was that I wanted to make a spiritual, humanitarian statement that was uniquely my own. You can call it universal love or spirituality but my job, I felt, was to make my language really concrete and grounded so that if I’m entertaining the notion of a higher love or a higher calling, I couldn’t leave it to this ‘oh you know what I’m talking about’ – I wanted my thoughts and feelings to be as concrete and as clear as possible! I feel like I accomplished that. The work of writing was more focused than in the past. I made albums like Fate’s Right Hand and Sex & Gasoline that discussed the same subject matter but this time I felt like I made it sincerely singular and digestible.”

It was no easy task for Crowell but ultimately it’s a project he’s proud of and rightly so! “The crafting of it took longer but it was very enjoyable. The title track, I started one new years eve in the Caribbean and I just got my notebook and started writing and writing verses, I’d lounge around on the beach and just write verse after verse, some of them were good and some were just silly.” Crowell laughs as he takes us through more of the tracks on his 18th studio album; “That lead into writing Here Goes Nothing which, I could show you my notebook, there’s reams and reams of pages of lyrics, that eventually gets distilled down to what works. I enjoy it, it’s a good job if you can get it and I’m very grateful that this has been my only line of work since I was in my early twenties. I take it very seriously because it’s a good job and I don’t want to lose my job!”

There is one particular track on the album that was difficult for Crowell to write. A very personal song about an unusual experience that Crowell had. “Transient Global Amnesia Blues, that’s from my own experience. Little did I know there was a medical condition called Transient Global Amnesia but on October 9th 2020 I woke up in an MRI in a local hospital with three hours of lost time and that was the diagnosis.” Crowell shares with a thoughtful look on his face. “I came to understand that the hospital gets a couple of cases a month but 98% of the time it never happens again. Here’s the good news, it happened to me and it scrambled my brain so much, my daughter sent me a get well dad message and an image of a sunflower growing on a raft in the thames river in 1950 and that photograph just triggered this narrative of this amnesiac state of mind I had been in hours before and the song just poured out onto the page. I’ve never gotten a song that way before – through a health crisis, which if it never happens again 98% of the time I guess you can’t call it a health crisis so maybe it was a gift from the Gods; we’re going to scramble your brain mate without any drugs and you’re going to appreciate it!” Crowell sees the funny side and is appreciative of the experience and the song that resulted from it.

Though it’s often difficult for Crowell to revisit these darker moments that he’s preserved in song form, ultimately he finds the process of getting it off his mind and onto the page rather cathartic. “It’s therapeutic and transactional, for instance theres a song on Triage called The Girl On The Street. I was in San Francisco, taking a walk and a lovely young woman crossed the street and approached me wanting money.” Crowell recalls, “Instantly I gathered she needed medicine, drug money and I was taken by how lovely and beautiful her skin was and her hair. At the same time there was an aura about her that said I need to work this guy and get his money. So I gave her the change in my pocket – 45 cents – and moved on. Afterwards I had this guilt; I could have bought her something nutritious to eat, I could have paid for her own private place to sleep for a night and to shower. All I did was give her 45 cents so when I got home it was nagging at me so I thought the only way to get this out of my system is to write a song about it. So I could exercise the feeling that I’d let myself down by not helping that woman, I would never have bought her drugs but there were other things I could have done. So that’s how that song came to be. The good songs tend to come from some impactful experience I’ve had.”

Crowell’s superb songwriting is backed up by some equally fantastic musicians too! The process started with producer Dan Knobler who Crowell had worked with before. “We had worked together before on the Hank Williams biopic with Tom Hiddleston who played Hank. So we worked on the music for that together. I gathered up some old partners like Larry Klein a bass player from LA, Stuart Smith because the Eagles weren’t touring and Jerry Roe, a wonderful pianist named John Jarvis and that was the nucleus to start with. By the time covid hit, we had to change our methodology to one musician at a time and share files but that crew was the beginning and it set the tone.” What resulted was a collaborative effort to give answers to the questions raised in these uncertain times. Crowell’s words so delicately crafted meant every decision, every note was thought out – ‘does this best serve the song?’

Crowell’s longevity within the genre is something to be admired and idolised, what is the secret to his success? How can young writers today follow in this legend’s footsteps? “listen to music and not just contemporary and not just your time. Find old blues records and old Jazz records, make yourself a musicologist first and foremost, study and know, have a vocabulary of music thats gone on before. Secondly, dedicate yourself to the work. It’s a gift to be making music, you have a responsibility to give it your best and to honour the tradition of those who have made the best work that we know of – to honour Leonard Cohen, to honour Bob Dylan and Lefty Frizzle and Hank Williams and Woody Guthrie and to know why you’re honouring them. That’s my advice.”