Jess Moskaluke: The story behind ‘The Demos’ 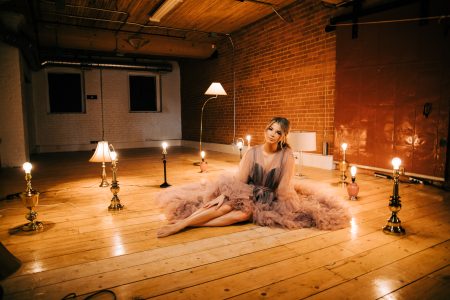 Loyal readers and subscribers may recall that a few months back we reviewed a terrific album by Jess Moskaluke called ‘The Demo’s’. If my memory serves me correctly, it boasted a cast of stellar songwriters who co-wrote this collection of songs with Moskaluke who is a talented writer herself. Now Maverick has caught up with Jess to find out more about where some of those songs came from! You can also refresh your memory and read that review HERE!

Hi Jess – great to speak with you. How are things for you out in Rocanville?

Hi there! Nice to chat with you as well, thanks for having me! Things are pretty good at the moment. It’s a long weekend here in Canada and the weather is hot, and my husband and I just got to the lake with our dogs. Hard to complain about that!

Obviously COVID restrictions have been a problem for people across the world, how have they affected your work as a musician?

I’m sure it’s no surprise that the entire music/entertainment industry got hit pretty hard all around the globe. The thing that I love about this job the MOST, the reason I get up and love to go to work every morning, is because I get to perform. So that’s been the hardest- not being able to perform. On top of that, we’ve all had to pivot. We’ve had to shift, reschedule, and re-reschedule all of our tour dates, album plans, goals, strategies, and many other things along the way. I haven’t really been able to get into the studio much. The little songwriting I’ve been able to do has been via zoom. Performances have mostly been to computer screens. I’m home every night. It’s a crazy time!

We loved your recent album The Demos – can you tell us a bit about how the record came about?

Thank you so much! So here’s the silver lining to the “doom and gloom” I kinda casted above. This album actually may not have happened had it not been for the pandemic. A year or two ago, it seemed the way that people were consuming music was one, two, or three singles at a time. I thought I might like to try my hand at that route, as opposed to releasing more albums. I liked that I could write something, record it, and release it quickly in order to get the freshest music out frequently to fans instead of waiting for the next album cycle to come around and release everything I’ve written in a year or two, on one project. HOWEVER! The pandemic came about and I quickly realized it was going to be very difficult to get into the studio as often as I’d need to if I wanted to only release singles. So I decided to dig back into my catalogue of songs I’d written over my career that I still very much loved, but had never released. Basically what we did was take those unreleased demos, pretty them up so they’re the same great quality you’d expect to hear on the radio, and then we took the “original demo” and the “prettied up demo” and put BOTH versions on the record. Hence the name, “The Demos”.

What are your favourite moments on the record?

I think the whole record itself is a moment this time around. I love how it peels back the curtain a little bit on what my songwriting process is typically like. I love getting into the studio and creating something inspiring with an actual track to it to really capture the feel and sound of what we’re going for. It allows me to have my hand in the actual direction and production of a song. It’s much more common that I write that way these days than it is that I just sit down with a guitar and sing into my phone and turn it into my producer and wait for it to be produced in full. So I think it’s kinda cool that fans can see what a song sounds like the day we wrote it versus what they hear on the radio when it’s all done!

New single ‘Leave Each Other Alone’ is great – how did this collab with Travis Collins happen?

Thanks! Glad you like it! I met Travis back in 2019 on my first trip to Australia to play some shows. We’d both been on the bill for a handful of different shows and he’d actually been so kind as to let me play with his band, as my band was back home in Canada. I was gobsmacked by his voice the moment I heard him and knew I wanted to work with him in some capacity. I just didn’t know what that exactly meant at the time. Flash forward to putting together “The Demos” album. I had a song called “Leave Each Other Alone” that I’d written years ago (before I’d ever met Travis!) with Trannie Anderson and Zach Abend. We kinda always knew it COULD be a duet, but we didn’t have anyone specific in mind to sing it. So we made sure that the lyrics and melody made sense for a solo singer to perform as well. I’d always adored that song, and it was actually the last song I decided to add to the record. I’d had this vision of Travis’ voice in my head on the second verse, so I thought we might as well ask- who knows, maybe he’d want to sing it with me! Thankfully he loved the song as much as I do, and he absolutely levelled it up! He took that verse and made it his own, and I am so glad he did. You can check out the demo version (just me!) as well as the duet version on the record, and I think that’s pretty cool too!

Barring any more restrictions, what are your plans for the rest of 2021?

This question has never been harder to answer, haha. Usually I’ve got a laundry list of exciting things, but this time I’m just patiently waiting until the world opens up a little more. It’s hard to know which of my plans for 2021 are realistic, and what may need to be rescheduled for a 234028th time, haha. For now, we’ve got some shows here in Canada in the summer/fall. We’ve got a few more things up our sleeve as long as the world opens up, but you’ll just have to wait and see what those plans are!