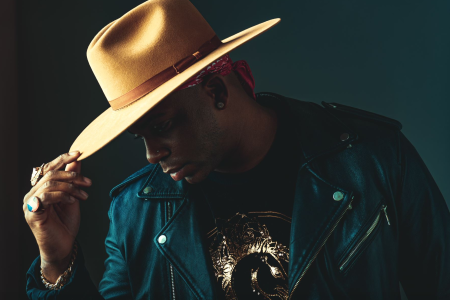 Jimmie Allen is used to ‘firsts’ in his career. Just this year he became the first black solo artist to win the ACM Award for New Male Artist of the Year. Now, as he continues to break down boundaries within country music, Allen teams up with an array of artists, across various genres as he delivers a collaborative project in the shape of Bettie James Gold Edition and gets to work on a children’s book and clothing line!

Jimmie Allen’s latest star-studded project hit the shelves at the end of June and is the true definition of ‘cross-over’. It’s a continuation of his successful Bettie James project, which amassed 155 million streams and was designed to honour his late father and grandmother. The eclectic nature of the collaborations on this latest project allows him to dip in and out of the music that inspired him growing up and that which continues to inspire him today. “All my dad listened to was 90s country music, the only thing he listened to in his truck was country. My mum only listened to Christian music” Allen begins. “ I got into like rock, R&B and hip hop when I was in high school. Nowadays, I’m listening to everything.” That certainly shows on the new album as he teams up with the likes of Pitbull on tracks like Flavor to Darius Rucker and Charley Pride on Why Things Happen.

Crafting nine of the 16 songs, Allen captured one of his most personal projects to date as well as drawing influence from other people’s stories as he addressed issues of loss and of love. “Sometimes it’s my life. Sometimes it’s people that I know, or stories I read about on social media, stories that people direct message me about or email me about.” Allen reflects, but one song in particular proved to be a tough one for Allen to write, but the end product was something Allen was very proud of. “I wrote Why Things Happen with my bass player Tate Howell, Cary Barlowe, and Brandon Day” Allen remembers. “We wrote it the day after Kobe Bryant died. Kobe was probably one of the most motivated people I’ve ever met in my life – every conversation, every time we talked, I left more motivated, and more inspired than I was before. Then you wonder, why something like that happens? He’s worked hard his whole career, then he’s leaving church with his daughter, friends and family, on their way to go to the school for a basketball game and something like that happens… and you’re like, why?” Allen’s emotions are still raw as he talks about that loss. “I feel like a lot of times in life, we get questions that are never answered. Sometimes those questions do get answered. I believe that writing that song gave me clarity on a lot of different things. With my father, and with Kobe I’d question; ‘Why would they be taken away’, and then it hit me one day, I was like, man, maybe they reached their moment, it was their time – all the good in the world that they could have done, they’ve done it. I feel like we all have answers. So for me, that song was really just me trying to find ways to cope through my father’s death, grandmothers or friends like Kobe. That can translate and help people through other loss whether it’s relationship loss, job loss or just things in life you don’t understand.”

To help deliver the song Allen enlisted the help of Darius Rucker and Charley Pride, meaning three generations of Black country singers came together to perform this emotional number. “I wanted it to be special. I’ve always wanted to do something with Charley Pride, so I called him on the phone, talked to him and he said yes. Darius and I were in Germany together, top of 2020. And I just asked him, I played it for him and he said, ‘Dude, I’m in.’ So Charley recorded his part in Texas, Darius recorded his part in Nashville, and I’m so pleased because it’s a special song to me – you got three generations of Black Country artists on there.” Allen is keen to show that country music is for everybody, that it’s accepting and diverse but for it to be ready for diversity, it needs diverse people in the genre. “It’s becoming more equal but even if they’re ready for diversity, it’s going to take diverse people involved in the industry to make it diverse” Allen begins. “If there’s no Black country artists, no Mexican country artists, no Asian country artists, then we can’t stream diversity if people don’t have the balls to go over there, put themselves in uncomfortable situations sometimes and create. They have to see you doing it to know you want to be a part of it. If my goofy self from Milton, Delaware can get two number one’s and work with all these artists, anybody can. The only thing you’ve got to do is work hard.”

Allen continues his words of encouragement, both to fellow black artists and anybody else who wants to be successful within country music; “There’s a difference between a dream you want and the work ethic you put behind it. I feel like diversity is created by the people that look different from the current state of that genre. Diversity is happening because we finally have more black artists coming over to country, and diversity is created, because we have people in positions of power, that believe in equality for everyone. So it’s a merging of the two.”

Allen, now in a position of power himself within the genre after earning the respect of his peers in the genre, is focusing on bringing people together through music in a time when we have all been apart. “This record shows people of all different genres of music and different cultures and skin colours coming together and that’s super important to me” Allen enthuses, “To me, that’s a representation of what the world can be like and we’re heading in that direction. I feel like the world is 85% good but the media focuses on that 15%. So I’m trying to focus on that good and that’s partly what this record is about.”

Allen is starting to teach youngsters about togetherness and the power that your voice has as he has just released his children’s book ‘My Voice Is A Trumpet’. Talking about the book which came out back in July, Allen said “It’s just a book about teaching kids to use their voice to encourage themselves and encourage other people.” The uplifting story is a lyrical celebration of the many types of voices that can effect change. “From voices tall as a tree, to voices small as a bee, all it takes is confidence and a belief in the goodness of others to change the world. Coming at a time when issues of social justice are at the forefront of our society, this book aims to teach children in and out of the classroom that they’re not too young to express what they believe in and that all voices are valuable.”

Whether it’s through music or through words on the page of a book, Allen is changing the world for the better, promoting positivity and togetherness through everything he does.