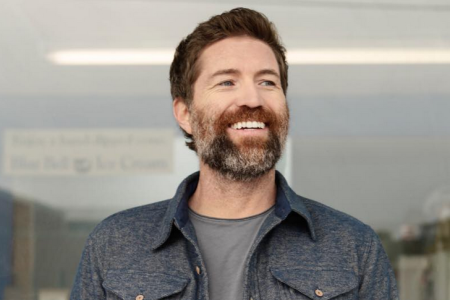 Josh Turner is celebrating the 15th anniversary of the release of his career defining album ‘Your Man’. The album was his first number one record and produced a run of number one singles too. Now certified double platinum and with a number of revivals in sales over the years, thanks to various artists endorsements, Turner is celebrating the milestone in style as he releases a deluxe version of the record which contains several live tracks. Turner’s distinct vocals have assisted in his plight to the top and have helped him maintain longevity over the last 20 years.

The re-release of ‘Your Man’ has given Turner a chance to reflect upon his career to date and analyse his successes. “We’ve had a lot of success with this record. It started out very successful because Your Man was the lead off single and it went number one, my first number one” Turner begins. “We followed it up with another number one Would You Go With Me, which was nominated for several awards and then Me and God which featured Diamond Rio and one of my heroes Dr Ralph Stanley.” Turner says as he reminisces the success of his singles, thinking back to where the album first gained traction. “It was going well to start with, it was number one on the albums chart and sold 102,000 copies in the first week which was unbelievable. Then I was asked to do the CMT Cross Country TV show with Randy Travis and when we did that, the sales skyrocketed, it was back to number one and was selling like hotcakes. It helped me get to double platinum.” Turner enthuses.

A number of notable artists within the country genre helped the album to stay fresh in people’s minds throughout the years. Fans of Turner’s such as Darius Rucker and Scotty McCreery sang his songs at breakthrough moments in their own careers. “Darius Rucker made his Opry debut in 2008 and sang Me and God. Then Scotty McCreery sings Your Man on American Idol in 2011 and wins that year and gives the song and record a revival.” For those who are fans of Chris Stapleton also, would know that he co-wrote a lot of hits before making it as an artist himself and one such hit was Your Man. “Chris Stapleton blows up as an artist and people realise ‘wait a minute, he and Josh were working together all these years ago because he was a co-writer on Your Man’ and he did harmony vocals on ‘Loretta Lynn’s Lincoln’ so people were surprised to see he was a part of that record too.”

Turner continues to work with an array of notable writers as well as writing alone. One of the success stories from ‘Your man’ was a song Turner worked on alone, Me and God, yet it became one of his greatest collaborations. “I was fresh out of college, living in a small apartment just south of Nashville and I hadn’t really signed my record deal yet, but I had signed my publishing deal so all I had to think about when I woke up everyday was writing country music, it was a special time in my life and I had this title for a while. I wanted to write a simple song about my relationship with the Lord so that’s what I did.” Though a deeply personal song to Turner, he was keen to share it with as many people as possible and his manager had an idea; “My manager when he heard it said ‘you’re such a big Stanley brothers fan I think it’ll be cool to ask Dr Ralph Stanley to sing on this.’ The Diamond Rio guys sung harmony on it and I thought it was a great idea. I asked Dr Ralph and he gladly accepted. When the song became a success, he was so proud of it that when he went out and did his own shows he’d actually come back out and do an encore with that song acapella. The crowd always loved that. Having Dr Ralph sing on a song like Me and God was definitely a proud moment because he was one of the first singers I heard coming out of the speakers.”

Whether Turner writes alone or with collaborators, he has a formula that seems to work well. “It usually starts with a title idea, because that gives me something to work towards. Even if I’m writing by myself or with other guys we always settle in on a title idea and go from there. Then we figure out the melody and dive into the lyrics last. There have been times when the music has come first but that’s very rare for me” says Turner. He has a team of writers that he’s worked extensively with in his 20 year career and hopes to continue working with for the next 20 years! “I have a core group of guys, Mark Narmore is someone I’ve written with for pretty much my whole career and he’s had a lot of success as a writer. I’ve written a lot with Pat McLaughlin and some of the more current guys like Ben Hayslip and Rhett Akins. I just started writing with Adam Wright he used to be an artist and is actually Alan Jackson’s nephew and he’s a great songwriter, really smart. I love writing with Tony Martin, Mark Nesler and John Anderson. I just started writing with a new artist called Austin Moody too, who’s just married one of the girls from Runaway June, Jennifer Wayne who’s been a friend of mine for a long time.”

For as serious as Turner takes his job and career as a songwriter, he has become good friends with his collaborators over the years too and they know how to have fun. “I mentioned Mark Narmore, he and I wrote a song years ago, we were just goofing off and neither one of us thought to record it and its one of our greatest regrets. It was the wackiest, craziest, funniest song that we were having so much fun writing. It was called Cricket on Crack so make of that what you will but that’s the strangest song I’ve ever written. We always have fun when we’re writing.”

As Turner reflects upon the last 15 years since ‘Your Man’ came out, he also takes stock of his proudest achievements. “Becoming a member of the Grand Ole Opry was a very proud moment because my Dad said when he was really young they used to gather round the radio every Saturday night and listen to the Grand Ole Opry so it’s a part of my family history.” Turner is also very proud of the collaborations he’s been involved in over the years too; “Another proud moment was Bobby Osborne singing on Prayed My Way Out Of Trouble from my gospel record, he was another I heard early on in my life so to have those bluegrass legends sing on my records was amazing. I felt things had come full circle. It’s still surreal to me that I get to live my dream like this.”

As the deluxe edition of ‘Your Man’ hits shelves, Turner looks ahed to the future and begins planning for the next release. “I’m working on a new record that I’m not at liberty to talk about but I’m real proud of it, I’m excited about it. I did all of my parts in 22 days which is the fastest I’ve ever made a record, I don’t recommend it, it took a few years off my life but that’s what I’m in the middle of right now and I can’t wait for fans to hear it.”