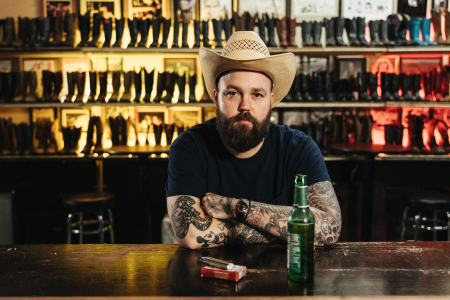 Joshua Hedley has always prided himself on crafting songs that lyrically speak to todays society, all set to a classic country backing track. His latest album ‘Neon Blue’ born out of the pandemic transports us to a Nashville Honky Tonk in the mid-90s. His love of old school country came from his early fiddle playing days and how his desire to play the fiddle is a bit of a mystery to Hedley and his family.

“I asked for a fiddle when I was three,” Hedley begins. “But neither of my parents listened to country music. So where I discovered what a fiddle was, nobody actually knows!” he laughs. His parents, although nurtured his passion didn’t really share it. “My dad really liked soul music. My mum loves Neil Diamond. I kept asking until I was eight and I guess they thought well he must be serious so they got me one and I started classical lessons.”

Though this wasn’t the kind of music he had envisaged playing, Hedley had a teacher who went above and beyond to cater for his real passion. “My teacher, she knew that I wanted to fiddle so she would teach herself a fiddle tune and then at the end of my classical studies, she would teach that fiddle tune to me. The first tunes that I learned were ‘Twinkle, Twinkle Little Star’ and a song called ‘Bile Em Cabbage Down’. That’s where it all started.”

He was introduced to the greats of country and bluegrass through taking his fiddle to regular jam nights. “My parents would take me to these bluegrass jams around town and I would sit down and play my little fiddle tunes and stuff. I found the music of Bob Wills and the Texas Playboys and Merle Haggard, classic country and western swing. I grew up listening to country radio as well but it was still quite good at the time.”

Hedley made waves in the country music scene when he released his debut album, ‘Mr Jukebox’ in 2018, he was doing something no other artist around him was, connecting tradition with the present day. “I think country music is whatever country people are listening to but what they’re listening to today, I wouldn’t call it country. It’s lacking some of the key elements for me personally, that make it country music. I need steel guitar in there. I need a fiddle. Country music to me is something hard to even describe. It’s just sort of in me. It just sonically fits perfect in my ears, it makes me feel the way that no other music makes me feel, I just connect with it.”

His first album transports us to the sounds of the 60s and 70s, “When I wrote ‘Mr. Jukebox’, I was really heavy into that early countrypolitan – Chet Atkins, Owen Bradley and a lot of early Liberty records Willie Nelson. That inspired the sound of that album.” For his latest record though, Hedley took influence from the death of one of his idols during the pandemic, Joe Diffie. “For this record I went down a 90’s country rabbit hole after Joe Diffie passed away. I listened to him then Daryl Singletary, Shania Twain, Mark Chesnutt and Patty Loveless.”

He started writing in his usual way, “I call it stream of unconsciousness. I’ll get some kind of hook or a line or something bouncing around my head and I just sit down with a guitar and just kind of mess around with it until something comes out.” After finding himself in what he calls a bit of a ‘creative slump’ Hedley drew upon some people with expertise in the area of 90s country hits! “I had to call in a few guys to help me out. One of them was a guy called Carson Chamberlain, he had written a few hits in the 90s and prior to that, he was steel guitarist and band leader for Keith Whitley. He called in this guy called Wyatt McCubbin, and the three of us just clicked. Prior to that, I had never done the real Nashville co-writing thing.”

The lead single, ‘Broke Again’ draws upon personal experience for Hedley who drafts in his friend Skylar Wilson to help him craft this fun, upbeat song that has a slightly deeper meaning behind it than what’s on the surface. “I had that chorus and that stutter that makes up the hook, I don’t know where it came from, it just sort of came into my head. I wrote that first verse and it became pretty clear that it was fairly autobiographical. I had fallen on hard times as most of the world had at that time. Although in my case, a lot of it was my own doing prior to COVID. I had set myself up for failure, as it were with some of my issues surrounding booze and drugs,” Hedley says honestly. “When COVID hit, the whole bottom fell out and I was broke again. I was stumped on the second verse, so I called Skylar and he wrote it. I don’t know if he intended to or not, but he really hit the nail on the head there, because it was definitely a lot of late night parties and neon thrills that put me in that situation of being broke again.”

The music video is comical and compliments the song well, again he calls upon a good friend and frequent collaborator to help him piece it together. “I knew the song lent itself to more of a silly video. So I called my buddy Travis Nicholson, who’s a really great director and I said, I had this idea for a video where it’s just me being terrible at regular jobs, nine to five jobs, which I have tried a couple of times to do and I’ve failed miserably every time. We shot the whole thing in front of his green screen and he digitally plugged me into a bunch of stock footage on the internet. It turned out pretty good I laugh at it. Knowing what went into it is just hilarious. I’m gonna have to post some outtake videos. Skylar Wilson also makes a cameo as my boss and trying to keep a straight face around him when he was doing the stuff that he did was almost impossible.”

For all his recent success, Hedley can still be seen playing at his old haunts, most notably Robert’s Western World on lower broadway in downtown Nashville. “That place is everything to me, it’s hallowed ground for me is it’s like the last stronghold of real country music. The last real Honky Tonk left in Nashville. It’s like a second home for me. I’ve been there going on 18 years and I just don’t plan on leaving that place, unless I get fired or die and I don’t see either of those things happening anytime soon.”

Now, Hedley is planning on taking this record on tour as he gears up for a country music cruise and looks to the Texas dance halls to bring these songs to life in a live setting. ‘Neon Blue’ is one of the best records to be released so far this year.