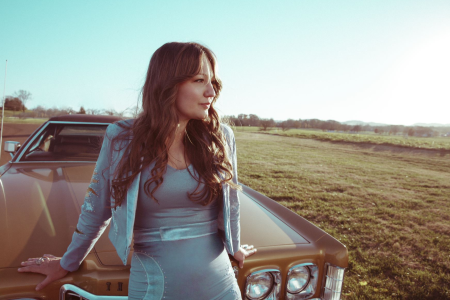 Kelsey Waldon has just returned home after impressing crowds in the UK and Europe as part of the Oh, Boy Records tour. She heads home to prepare for the release of her new album ‘No Regular Dog’. Though she gained some new fans during her trip to Europe she lost a few things too… luggage! “It was awesome, the crowds were amazing. But, they lost my luggage in Germany. So, I almost didn’t even make it over there, there’s just so many delays and stuff, travel is insane right now. I still have not seen my bags, I had to go shopping in London, it was pretty intense there for a minute. I called it the white tank tour, because that’s all I wore. People don’t know what we go through!” She laughs as she reflects on how ‘rock-star’ the tour was as they had very little clothes and equipment but kept the music playing regardless.

Waldon has always had that mindset and work ethic, developed from the bartending, independent days, before she got signed to Oh, Boy Records. “I was putting out albums before I met John, I put out albums independently. So I already had that independent spirit. I’d put records out from GoFundMe campaigns and bartending money – I was a bartender in Nashville for probably six or seven years and paid for a couple of my albums that way,” she reflects but meeting John, her hero and mentor, changed the trajectory of her career. “When I met John Prine, so many things changed for me; instead of having a cult following, I obviously went into greater consciousness for everybody, a lot more people discovered my music.”

Before he signed her, she was always a fan. She took to music from a young age, first inspired by her babysitter. “I had a babysitter, a lady, we called her nanny, but she basically is the only reason probably me and my sisters are alive today and she was the music director of her church. But anyway, she taught me how to play piano when I was little and I just took an extreme liking to it. I started playing guitar when I was 12.” A few years later, she found the music of John Prine. “I’ve been listening to John Prine since I was probably 15 years old. He was my hero, he was my songwriting standard. He’s one of the reasons why I moved to Nashville because I heard you could see John Prine at the Melrose Billiards Parlor and Arnold’s Meat & 3, hanging out. So to be signed to his label, later on in my life, is something that I never thought could happen. Just to be a small part of his legacy, it’s amazing. John and Fiona, his wife, they’ve both been mentors and, like family to me. He changed my life greatly, he will always be a part of my story.”

Inspired by the greats, she also made her way into songwriting and she found it was something that just came naturally to her. “My mum has some of my earliest songs from when I was probably nine years old. I don’t think they were any good, but I wrote them out, and somehow I knew how to do that. Music kind of chose me,” She says with a smile. For her new album ‘No Regular Dog’ she took the time off during the pandemic to focus on crafting these songs. “It gets harder to write the busier you get, especially during an album cycle. I wrote all these songs, over the course of a year or so during the pandemic. I had a lot of time to write, because finally the world stood still and I was able to sit down and write. They come to me in all kinds of different ways, sometimes they come in five minutes, and sometimes they take five months.”

The pros of label backing also come with some cons too, like a busier schedule! “It gets harder as you get older, and as you have more responsibility, because I’m not just sitting in my bedroom anymore, just writing songs, I’m having to work a record and go on tour so I think you have to have a little more discipline. You just have to be willing to listen to your muse. I always get so afraid, I think every artist does, that a song is not good or we worry that, ‘I’ll never write another one’. But you always do, they never go away. So I just think you have to be open to receiving them. I just need to sit my ass down and write, then usually something happens.”

Her single ‘Sweet Little Girl’ with it’s upbeat groove coupled with dark lyrics is fast becoming a favourite amongst fans. “That was one of those songs, that just spilled out, it’s like that thing when you have something inside of you, or something you’re needing to say, or a story and you don’t even know it, but then you sit down and you’re like, where did this come from? I just had the first line, ‘Sweet little girl, straight off the farm/Didn’t mean nobody, didn’t mean nobody any harm’.” She analyses her song and dives deep into her subconscious as she reflects on where it came from and what it means to her. “Here’s a simple idea of someone that’s lost their way and trying to find the way back home. It became bigger than that. I wrote it from an outside perspective, but then I started realising that a lot of it was about me, and it was about real life, things that I’ve felt inside and my journey and my battle with addiction. It’s hard to dissect something like that, because I think it’s going to mean a lot to a lot of different people.”

As she embarks on the next chapter in her career, Waldon thinks back to what she has achieved. “The proudest moment of my career, I think is just being able to have a career, especially after coming out of this pandemic. I think the fact that I’m able to survive – we always say surviving the dream, instead of living it, but I am living it. I’m also surviving it, and it takes a lot of hard work and the fact that I’m really out here doing it, and that the music resonates with people, I think that in itself is a goal that not many get to achieve. I’ve still got a lot of work to do, but I’m doing it.” There are individual occasions too, memories she has made that will stay with her forever, bringing a smile to her face as she recalls them. “Getting to play The Ryman, I’ve played the Grand Ole Opry probably five times I think, but in particular, getting to be on the show with John Prine where he introduced me as the first new artist to be signed to Oh, Boy Records, that was a pretty memorable moment. I always say if I died, even if everything like stopped now, I feel like I would still be able to say I did some pretty cool stuff.”