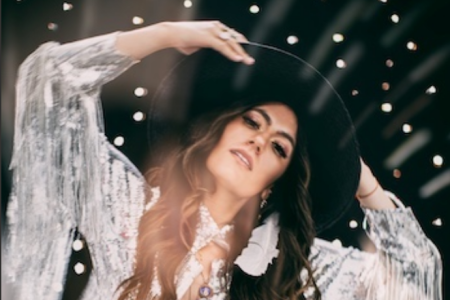 Alyssa Bonagura, now in her early thirties, has had a long and varied career which pretty much began when she was just a tot, out on the road with her parents, Michael Bonagura and Kathie Baillie. Their band, Baillie & the Boys rose to fame in the late 80’s with a string of top 20 hits on the Billboard country charts. They had originally found work as backing singers for the likes of Randy Travis whilst Michael also penned the number one hit, ‘There’s No Stopping Your Heart’ for Marie Osmond, giving themselves a taste of every side the industry had to offer.

During the height of their success as a band, Michael and Kathie also welcomed Alyssa into the world and they took her everywhere with them. “My earliest childhood memory is the sound of a diesel engine on a bus,” Alyssa reflects with a grin. “My parents used to get picked up here at our house, and we live out in the countryside. So the bus would come to the end of the driveway, and my mum would come wake me up at like midnight, she’d say, let’s go the buses are here. We’d walk down the driveway, get on the bus, and then we’d be in a different city. My whole life was like that and I just loved it.”

As she travelled round the country with her mum and dad she knew she wanted to be out on stage performing too. “My earliest memory of singing, I was like two years old, and my mum was playing this big festival. I ran on stage because I wanted to sing and so she let me sing ‘Take Me Out to the Ballgame’ in front of 20,000 people at this festival and so I’ve always wanted to do it.” As well as her parents, Alyssa was in good company as her parents toured with the greats of the country genre, each one welcoming Alyssa into their lives and hearts as she grew up. At the time, Alyssa didn’t realise just what a wild and crazy life she led as a child. “We were hanging out with Vince Gill or Reba McEntire, Kenny Rogers, they were on the road with George Strait. To me, they were just other people that were singers and then when you start to get older, you start going to school, and people start saying to you, your parents are famous. That’s when you start to realise who your parents actually are and what kind of business it really is. My parents, they were never the kind of people that like ever boasted or bragged about anything they did. So I was brought up in a really humble environment.”

One of her first forays into recorded music came when she joined Kenny Rogers for a Christmas duet at just ten years old. However, Alyssa’s parents never pushed her into the spotlight, encouraging her to find her own way, her own dreams and supporting her to do so. “I used to go to my dad and beg him to teach me how to play guitar. He really wanted me to learn on my own first because, they didn’t want to pressure me to get into anything.” She found her own influences and began to learn. “I started listening to a lot of Joni Mitchell albums. I would tune my guitars to open tunings, so that I would get the rhythm down. Then as soon as I was able to do that, my dad started teaching me how to play chords on the other hand, and so, I’m really self taught and really gravitated towards music in my own way. My parents were so supportive of that.”

Alyssa, who has enjoyed writing for other artists as well as for her own solo records and albums she released as part of The Sisterhood with Ruby Stewart, spent the pandemic focusing on her writing. “I had really gone through a lot of changes, just like everyone did, at the start of the pandemic. My band broke up, we were together for five years, we parted ways with our label and I moved back home. I was in this space that I’ve built here at my parents house. I’ve got my little studio in here and so I just dove into writing, it was therapy for me. It was helping me get through the days, just creating.”

One song that really captivated audiences upon it’s release was ‘New Wings’ which she co-wrote with Canadian songwriter and producer, Tawgs Salter. She reflects on the story that first triggered the idea. “I told him about this poem that I had read by Paulo Coelho, it’s really a story. It’s called ‘The Lesson of the Butterfly’. It talks about how this man is outside and he sees this cocoon hanging from a branch and he sees this butterfly struggling out of the cocoon. After watching it for quite a long time, he feels sad for this butterfly that is struggling so much and wants to make it easier on him. So he goes and gets a pair of scissors and he cuts open the cocoon thinking it will help the butterfly just fly out and he’ll be free. Unfortunately, the butterfly falls to the ground with underdeveloped shrivelled wings and is never able to use them because he was underdeveloped.”

With the changes, particularly in her career, that she was going through, she felt a connection to that butterfly in the poem. “That hit home for me in a really big way. It was something that I felt like I was going through, I felt like I was in my struggle moment, my cocoon moment and the thing is, is that all these struggles that we face in our life, they really make us stronger. I really believe that and they’re really what’s forming our new wings, so I wanted to capture that in a song. I’m really grateful that this song is helping people realise that the best is still yet to come. There’s beauty in being stuck and going through this struggle and to really believe that on the other side, there is freedom and wings.”

She went on to record an acoustic rendition of the song, changing it’s meaning slightly as it struck a different chord with fans. Influenced by her parents style of music, Alyssa went back into the studio, “I’ve always loved acoustic music since I was a kid. I grew up listening to Patty Griffin and Joni Mitchell and obviously my mum and dad are a great acoustic band too. I just wanted people to hear it a different way. The full produced version is really uplifting and happy, roll your windows down in the car, sunny tune. This one is a bit more introspective, which I feel like comes with the autumn, a lot of the time, we kind of go internal and we curl up with our blankets, and we watch old holiday movies and we think about the good old days and I felt like this version of that song really evokes that.”

Out of the turbulent times, Alyssa has always managed to create the most beautiful and inspiring music that uplifts those in similar circumstances. She spent time away from her family whilst studying at the Liverpool Institute of Performing Arts and though the musical opportunities she had whilst on a scholarship there were memorable for her, it was also hard to be that far away from home, from her family. The song she wrote, ‘I Make My Own Sunshine’ became one of her mum and dad’s favourite songs. “That was a big moment for me because it was a song I wrote by myself in England. I wrote it when I was living in Liverpool, and it was raining all the time, I needed to pick myself up.” Her biggest ambition is to make them proud, “We’ve had a lot of conversations about things over the years, and I always want to make them proud, just because they’re such good people, and they’ve done so much for me. I’m an only child and so, that’s my family. This is my family. This is all I have. My dad came up to me last year when I was going through all this stuff, and he just randomly said to me one morning, Alyssa, I’m really proud of you for what you’re doing, and I just started weeping because I think that’s really what you want to hear.”

Despite growing up on a tour bus and being on stage since she was two years old, Alyssa still feels the nerves every time she steps out onto the stage. “I do get nervous before I go on stage. My mum tells me that that’s the sign of a true performer, when you get nervous before you go on stage. The truth is, that adrenaline really fuels your show. I think it’s always good to get a little bit nervous, because it keeps you humble.” Now Alyssa is preparing to release her next record and get back out on the road, “I’m finishing my album. I’m really, really excited for what’s next, creating visuals to go with all that is really fun for me. So watching the vision come to life is what’s next.” She has enjoyed success here in the UK after her performance at Buckle and Boots last summer and has received lots of airplay on the BBC and she is learning to appreciate every last second. “Having my song played on BBC Radio by Bob Harris, that was a big deal. Right now, I’ve got like 5 million radio impressions here in the US, as an independent artist, that’s a success!” She enthuses. “2020 taught me that you can’t not celebrate the little victories because all those things, it’s really about the journey of your life and the successes along the way that bring you to the next stage.”

As Alyssa looks forward to the next stage in her career, with her parents supporting her every step of the way, she smiles fondly about the life and experiences that have led her to this point and concludes, “In my soul is just music and notes and chords.”  Alyssa will be performing in the UK in August as she takes to the stage at Millport Festival. Tickets are available NOW!