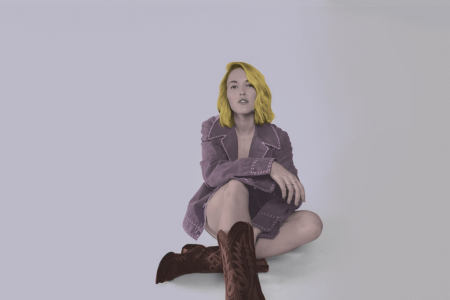 Glen Campbell dominated the country genre for five decades, releasing over 60 albums during his illustrious career. The Rhinestone Cowboy had a string of chart topping, crossover hits such as Wichita Lineman, Galveston and By The Time I Get To Phoenix. Campbell also, like many stars of that era, starred in a number of films including ‘True Grit’ alongside John Wayne. The Country Music Hall Of Fame inductee left a legacy that was unrivalled. However, in his later years he had a very public battle with Alzheimers, but his drive and passion for the music he loved, alongside the support of his family helped him to embark on a final tour of America, which was documented in the documentary ‘Glem Campbell: I’ll Be Me’. It was in this documentary that the wider public first saw the brilliance of Campbell’s youngest daughter Ashley, who played Banjo in her father’s band alongside her brothers Cal and Shannon. She paid tribute to her father by writing a song that featured in the film called Remembering.

Ashley Campbell went to university with a view to going into acting and comedy. She joined a number of Improv-comedy groups whilst she was studying and this humorous side was something that translated into her music too. Her first album ‘The Lonely One’ included songs such as Better Boyfriend with lines like ‘And like a ninja fighter/I even killed a spider/In the bathroom with the bottom of my shoe’. But despite originally pursuing more of a theatrical career, Ashley soon gravitated towards the stage in a musical capacity, thanks in part to her Dad. “I had just graduated from college in 2009 and I played banjo for school. He was going to tour in Australia and New Zealand and I thought it’d be a great opportunity to see those places so I asked if I could go along as a vacation and he said ‘well you should play in the band’ so that’s how I got started.”

It was trial by fire for Campbell who had originally intended going along for just the one song. “Originally I was going to play on one song Gentle On My Mind and that’s it but the musical director was like ‘oh no you don’t, I’ve been wanting someone to play the strings part for a long time, we need another band member.’ I play piano as well, I’m not great by any means but I can memorise things and slightly read music so he got me playing all the strings parts on a synthesiser in the show so I became a full fledged member of the band straight away.” Most musicians begin performing in front of a handful of people, who are not really listening, in a bar somewhere. Not Ashley, her first shows were in front of thousands! “I was very afraid to mess up and it took years to get that out of me. my first show was the Auckland State Theatre in New Zealand, it’s a huge theatre and seats thousands of people but luckily I wasn’t the one front and centre so I took comfort in that” she reflects. “Watching my Dad was very comforting to me as well because he was such a pro you know? When he was on stage he made everyone feel like he was carrying us. He was our captain, you didn’t have to worry” she adds fondly.

Glen had a great influence on Ashley’s music career going forward, but first and foremost he was a great Dad. “I always took it for granted that he was who he was.” she smiles, “When you’re a little kid it’s just your dad and that’s what he does. Once I started playing instruments myself and realised how difficult it was and realised how well known he was, I began to go back through old videos and thought, ‘oh my gosh he’s an absolute legend’. I started to become a fan myself and felt privileged to be his daughter, to get to be around him and play with him everyday, because he was such a good dad. It was cool to go from daughter to daughter-fan because I love his music, that’s where my musical taste comes from.”

Ashley continues, “He was not a big teacher, later on when I was a little bit better, he loved sitting down with me and I’d play a song he recognised and he’d get really excited. This unfortunately was when he started to get ill with Alzheimers so he wasn’t as sharp as he’d have liked to have been. That was still a great way that we bonded together. Growing up, music was all around, there were always guitars lying around but I didn’t start playing until I was 15. He was more of a taste influence than a teaching influence.”

Glen’s influence is ever present on her second album, ‘Something Lovely’ which Ashley’s vocals really shine through on. The songwriting is outstanding and coupled with the arrangement honours the traditions of the genre. “I try to follow my Dad’s advice because he always said make music that you want to listen to and chances are other people will want to listen to it as well. what I like to listen to is the music from the 60s and 70s. There are a lot of people these days who are making classic sounding country but I don’t like how slick and crisp it sounds. I like the way they recorded back then, it sounds old so I wanted to do an homage to classic country but wanted it to sound like it was recorded back then. Kai did a great job bringing it into reality.”

The Kai that Ashley refers to is Kai Welch who co-wrote that very first song with Ashley, Remembering. “I love his musical tastes. At the time he was in Kacey Musgraves band, he was the keyboard player and guitarist, a utility player so he was very busy.” Ashley remarks, “We had a ten day window to record the whole album. He had a little studio set up in his friends basement so it’s very homegrown. We wanted it to sound as live as possible so we tracked a lot of the instruments live. It was a fun process albeit a little rushed, I would have liked a little more time to breathe.” But despite the tight schedule, the pair created a really unique record together. “I’m so proud of how it turned out and working with Kai is a very good process for me because I trust his judgement and he listens to my thoughts – we make a very nice team.”

The production and arrangements drew influence from Glen Campbell’s music; “From my Dad’s music I love big string arrangements” Ashley begins, “I love listening to this album, not because it’s me but because of all the talented friends that I have that played on this” Ashley gushes, as she rhymes off her talented friends that helped bring this record to life! “My friend Eli Bishop played all the string parts and did those arrangements so I enjoy listening and saying ‘great job Eli’. The steel guitar parts on Forever’s Not That Long – they were done by my favourite steel player Doug Jernigan who usually plays at The Station Inn. I feel so lucky that so many talented people played on this record so I love listening to it for that reason.”

Ashley’s songwriting too, aims to honour the music greats. “I wrote If I Wasn’t the day after I watched a Roy Orbison special on TV called The Black and White special. I was so enamoured… I’ve watched Roy Orbison many times and I love him but I’ve never watched a whole concert of his so I was in the mood for some Roy Orbison style music, for soaring vocals.” The next day when she entered the writing room, Ashley took the idea into her collaborators Chris Roberts and Jabe Beyer, “I said, ‘guys lets write a song that Roy would have sung’ and it just sort of came out on it’s own.” When choosing songs for the album, Ashley was keen to do a duet and singled out this song as the one that would work well. “one of the first people that popped into my mind was Vince Gill, he’s got such a high beautiful lonesome voice and I thought that would be perfect for this song and he said yes which was awesome!”

Ashley has found a way to continue her father’s legacy whilst paving her own way in the industry. Her Dad’s music regularly features in her set lists and recently she performed at the Glen Campbell museum on what would have been her Dad’s birthday. “Gentle On My Mind is my favourite to play because it’s so much fun to play on the banjo. The lyrics John Hartford wrote are just absolute poetry.” Campbell says with enthusiasm. Her latest album is a true testament to the hard working, talented musician she is. Over the past four years she has wowed audiences across the world as she steps out into her own spotlight, centre stage; captivating the crowds with her mesmerising banjo playing abilities and making people laugh with her off the cuff sense of humour. From her current base in Ireland, Ashley looks forward to being able to get back out there and showcase the record. “I want to tour for my album, thats what I want to do next! I plan on touring England extensively.”

For all of the awards and accolades, number one hits and TV appearances Glen Campbell gained, perhaps the maestro’s greatest legacy is his children, in particular, the incredibly talented Ashley Campbell. Glen was a legend of country music but Ashley is the future and it’s looking very bright!