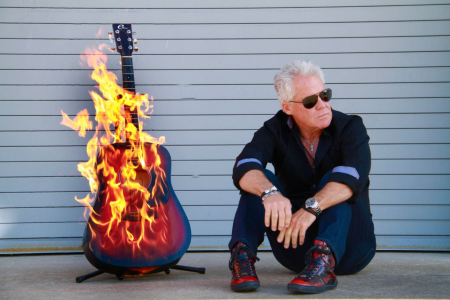 Kenny Rogers was a true legend of the country music genre in particular but he charted over 120 singles across various genres, selling 100 million records worldwide and won numerous awards throughout his six decade career including three GRAMMY awards. After passing away in 2020 his talented nephew, Dann Rogers, who has had a successful artist and songwriting career himself, has been determined to keep his legacy alive.

“Uncle Kenny and my Dad were my heroes,” Dann begins, “I knew I’ve always been a songwriter. Kenny, was the entertainer in the family. My father was in the music industry. He was a very well known man in radio promotion and production. So Uncle Kenny, was always in our home, he was always playing music. He was 14 years older than I was, so when I was 14, he was 28 and he had already found some success with The First Edition. So I was aware of his talent and I was aware of his success, and it inspired me and influenced me.”

With his Uncle and Dad immersed in music, it didn’t take long for Dann to find a home in it too with his first taste of songwriting coming at age 11. “There was a songwriter named Mickey Newbury, who was really a mentor to me. Mickey was sleeping on our couch and hanging out in our house,” Dann sets the scene. “My dad took me to the studio and Mickey was with us, he was producing a group called the 13th Floor Elevators. Dad walks out the control room and says, ‘Mickey, I’m going to go get some coffee with the boys. Will you watch Danny while I’m gone?’ Mickey said sure. So I’m watching him play guitar and I’m just enthralled with what he’s doing, my dad walks back in the door about 45 minutes later. And Mickey says, ‘Lelan, what are you up to?’ He replies, ‘I just dropped in to see what condition my condition was in’. Mickey thought it’d make a great song and he starts playing the chorus. He says, Danny, ‘Write these words down’. I’m loving the process, and I suggested a few lines and he really accepted my participation.”

From that moment on, Dann knew that was what he wanted to do and his first taste of success would come just a few years later. “At 15, I wrote my first hit for Johnny Nash, ‘My Merry Go Round’ and he cut it at the Beatles studio there in London and John Lennon sent me a personal message that I had written the most beautiful song he’d ever heard in his life. I tell everybody, when you get a message from a Beatle, and you’re that young, you start at the top and work your way down,” Dann laughs. He divulges how Nash came to record the track, “Johnny Nash was walking through the family living room, he was at our house and heard me writing that song and he stopped and he listened. He said, Can I record that song? He took it to England and cut it. The production on it was superb.”

Dann would go on to have songs recorded by Dottie West and Glen Campbell. “Glen was a friend of mine. I wrote one of his songs ‘Hang On Baby’ in Vegas, in a hotel room,” Dann says. “I threw it in the garbage, I remember the moment that I wadded up the paper and I said to Steve Hardin, who I was writing it with, he was playing in Glen’s band and we were between shows. I remember the moment I picked it up and said this isn’t good enough, and threw it in the garbage. As I was walking out of the room, I noticed Steve taking it out of the garbage can. I can hear him as I walked out the door playing it. He took it to the dressing room, played it for Glen and the next thing you know, Glen’s on The Tonight Show here doing my song.”

Dann is a perfectionist when it comes to his songwriting, hence why the song made it’s way to the trash can, although perhaps that was a little prematurely! “For me, it’s about quality control. I try not to put my name on anything that I wouldn’t want everybody to hear. When Glen heard that I had thrown that song in the garbage, he called me and said ‘You probably got the most expensive garbage can in the world. Don’t ever throw another song away until I hear it.’ We believe inherently when we’re writing a song, that it is really good. The difference in good and great is if you’re willing to look at it objectively when you write and you’re willing to do a rewrite, continuing until you think it’s perfect.”

Both Dann and Kenny’s careers crossed paths on numerous occasions, most notably when they made history as the first two relatives ever to enter the Billboard Top 10 Adult Contemporary charts. “It was the most exciting experience in the world. It was a Guinness book moment. He was number five with ‘Coward of the County’ and I was number six with ‘Looks Like Love Again’. We were neck and neck and it was thrilling. Kenny was one of my heroes, as was my dad, those two guys influenced my life and shaped my life and every good thing that’s ever happened to me. I remember driving down the freeway in Los Angeles and I turned on the radio and there I am, so I punched the other station, and I’m on that station at the same time. I punched the third one, all three stations were playing my record at the same time. I almost ran off the road screaming with excitement. That was a moment I’ll never forget in my life.”

Dann is determined to keep his family’s legacy alive and has recently released a new single ‘Lesson In Love’ which examines the difficult topic of abortion from an empathetic angle. “I didn’t sit down to write it this way. I was doing a 40 day fast and I was just drinking broth, juice and water for 40 days. I hadn’t written any songs in a while and I wanted to just see if I could still write, did I still have it in me? It seems like I go out into the world and I observe what’s going on and I learn and I get educated on things.” There was an element of shared experience that Dann could draw upon when writing the song. “I had to dig deep on that one because I did go through that process early in my life with a woman and that felt really bad and guilty for having done that but I would never judge a woman for choosing to abort a child, that’s a moral decision between her and her God. So I did draw on some experience from the emotions and the feelings I went through. But the song was not about her. I was able to write the song with great empathy towards the girl in the story. Sometimes I pull from experiences I’ve had but I can also just sit down and write a story song without having to experience anything. I think that’s part of being a good craftsman.”

As Dann continues on his musical journey, he takes the words and advice that his Uncle gave him, with him. One of the most important pieces of advice that his Uncle gave him was one of kindness. “One of the things Kenny said to me, and he said it the last time we were together, here in Newport Beach on his farewell tour. He said, I found that if you’re nice to people, and they like you, they’ll go out of their way to help you. I was driven to be successful because of the influence of my father and my uncle. They were legends in the business and I want to keep their legacy alive.”