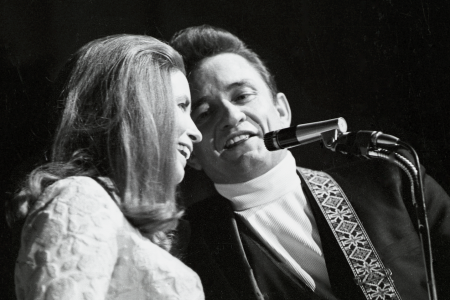 John Carter Cash, the only child of Johnny and June, is sitting in his studio, Cash Cabin Studio as he talks to me, preparing for his recording session later on in the day with his wife Ana Cristina Cash. He tells me of his fond memories of travelling the UK with his father. The room he’s sitting in is where his mum and dad recorded their later albums, where Loretta Lynn has recorded 105 of her songs, George Jones, Emmylou Harris, Merle Haggard, all names who have made history in the room.

For John, it wasn’t always a place of work, but a part of his home, as a young child John used to spend time watching movies in there with his dad as any normal child would have done. “The thing about it was, my parents were normal, connected to the soil, good people, and they never really outgrew that. They were always connected to their roots. I saw them treat the President of the United States the same as they would the grocery store clerk.” However, John’s family was far from normal, something he only came to realise as he got older. “For 150 to 200 days a year, you’re watching your parents on stage. My father getting the attention of so many people out front in the audience, I looked up to him but it was later on that I realised that their heritage and legacy was so immense. Not everybody has a grandmother like Maybelle Carter, a dad like Johnny Cash and mother like June Carter, but it was their humble nature that was at the heart of my childhood.”

Carter Cash was always destined for a career within music, it was in his blood. He’s written and released music himself and more recently has gone back to that but his passion lay within production. “It came naturally just because I’ve been around musicians for as long as I have. When I began to work in the studio on the production aspect, I felt like I’d found what I wanted to do when I grow up.” The first record he worked on was the GRAMMY Award winning album ‘Press On’ by his mother, June. “I co-produced that record with JJ Blair, I was very green. I was recording my own music at the time and had not set my goals to be a music producer. JJ Blair and I first learned pro-tools engineering in the process of making that record. Then I went on to produce the ‘Wildwood Flower’ album by myself with an engineer named Chuck Turner. I was delving more into music production but it was still early days in my career, it was unadulterated, it was absolutely pure – let’s follow my mother’s heart.”

Carter Cash was inspired by his mum’s work ethic, “She had a workforce within her soul that was unstoppable,” he smiles as he remembers her fondly. “I remember we recorded part of it in Virginia at their home up there, we had to turn off the air conditioning to be able to record because it was too loud. We recorded 14 songs in two days, I believe, a large amassment of music and that’s two or three takes on each song. I saw my mother at her greatest moments of strength in life, when her physical Nature was on the way downhill, but she still persisted. She still carried on.”

‘Wildwood Flower’ was released posthumously and won the GRAMMY Award for Best Traditional Folk album. As a producer and caretaker to the heritage of his musical ancestors, Carter Cash has released a number of posthumous albums, one such record was his father’s ‘Out Among The Stars’. “Firstly I ask myself, would he want this releasing? Then I ask, why was it not released in the first place? That was a project I was able to answer honestly that yes he would have wanted that to be heard. Not only that but Billy Sherrill, my dad’s producer, I believe he would have wanted it to be released too. There are still a lot of songs out there, B sides or whatever that weren’t a great take that will never be released. It’s not like we’re releasing everything we can possibly get our hands on, it has to be right and it has to make a difference.”

The latest Johnny Cash record to be released came out just a few weeks ago. ‘Bear’s Sonic Journals: Johnny Cash at the Carousel Ballroom’ is an interesting live album recorded on April 24th 1968, before Live at Folsom Prison had been released and whilst Cash’s career was still somewhat waning. The ballroom was less than a third full but with his new wife, June by his side, Cash appears relaxed on the tape. “The folks at Owsley Stanley came to the cabin in Tennessee and brought the music with them. We listened to it, and it was so powerful, just to see where my father was at that time, at a show that was off the books. He didn’t have his full band, it was a more stripped back show. I think he sort of let his hair down a little bit. There’s so many of his shows where he did the same show, mostly every night, he would add a song here or there but for the most part, it was the same show. So this show stood out as being something unique in the first place. Then it was the way that it was recorded, and who it was recorded for and the 700 people who happened to be there, who they were in the world of music. There’s just so much between the lines to be read there, the sonic nature of it, the way that it’s balanced out with Johnny on one side, everybody else on the other – it’s unique. Bear set the standard.”

It’s important for Carter Cash to keep his mother and father’s legacy alive. “It’s like the classical recordings of Mozart and Beethoven, they’re just as relevant today as they were when they were written,” he states. “The interpretation can be brand new, though. People want to know who Johnny Cash was, people want to be Johnny Cash. Maybe people want to think like Bob Dylan or write like Bob Dylan, but they want to be Johnny Cash. There is a great mystery behind who exactly is that man but there’s so much to be found within the music that he recorded in this life. So much could be said, within the music that has not been released yet and there’s still more to come,” he teases.

Productions to be proud of

Out of all the records he’s produced over the years, Carter Cash’s favourite memories are working with his parents. “Working with my dad was wondrous. He was a seasoned artist that knew what he wanted, that had good days and bad days, but the body of work that he did, I’m still so proud of being a part of that, from American three until the end of his life.” Carter Cash was associate producer on that project with Rick Rubin taking the lead. There are other legends of the genre that John Carter Cash has worked with that have delivered some exceptional memories and moments within his career and none more so than the work he’s done over the years with Loretta Lynn, “I’m very proud of the Loretta Lynn albums, and Loretta, in so many ways is a lot like my mum. One of those records I produced with her daughter Patsy was nominated for a GRAMMY, just really beautiful music. The records that I’m most proud of, are the ones that there were no rules, people followed their heart.”

As he continues to produce out of Cash Cabin Studio, he also gears up to release two projects he’s been writing for over Lockdown. “One is a is a hard rock record that I did with my friends that I grew up with. It’s a band called The Assassinzs and we have a song out that was in a Netflix film called The Ice Road. We finished a record and that will be coming out in the next year. I also did a project called Pineapple John and it’s an alter ego really. I spent a lot of time growing up in Jamaica, it’s a story album, that was my favourite kind of music growing up, my father’s records like ‘Ballad of the True West’ or songs like ‘El Paso’ by Marty Robbins, records that told a story, that brought the listener to the place in the song. I also listened to hard rock so if you tie all those things together with Island music, that’s where I am right now.”

The music and legacy of the Carter Cash family lives on in his five children. He directs videos with one of his sons Joseph, the pair have worked on videos for Marty Stuart and Runaway June in recent times. “My son Jack is 15 and he plays wonderful piano. My daughter Annabelle also sings and writes, she’s 20. My son Joseph, I mentioned, he’s 25 years old, and he’s a great guitar player, mandolin player, plays everything he picks up and then my daughter Grace is four and she’s sings and dances, she’s in ballet class, she has a lot of fun. I have five children so my son James is the youngest, and he’s two months old but he cries in pitch!” He laughs as he talks fondly of his family.

Through John Carter Cash, the musical legacy of Johnny and June lives on and expands as he puts his own stamp and skill set on both the music of the past and the present day. Through it all he remembers his parents humble nature and kindheartedness and truly follows in their footsteps with this ethos and their work ethic.

YOU CAN READ THE FULL ARTICLE IN THE NEXT ISSUE OF MAVERICK MAGAZINE AVAILABLE SOON IN OUR SHOP!