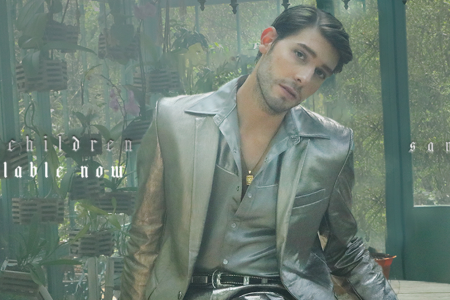 Hank Williams was just 29 when he passed away but his impact on the genre was so profound that his music lived on in the hearts and lives of every fan and artist of the genre that has come after him. Known as ‘The King of Country Music’ Williams legacy lives on in his children and grandchildren. Hank Williams Junior was just three when his father died but he grew up with the same knack for songwriting as his Dad and he learnt quickly how to carve his own path. The talent of the Williams family wouldn’t stop there as his children Hank Williams III and Holly Williams embarked on careers within the music industry too. Now, the latest family member to continue the family business is Sam Williams, though he is very much chasing the dream in his own unique way!

“I was definitely always aware of my dad’s fame and music. I think I came to know more of my granddad’s legacy and fame as I got older, as I could look up his catalogue on YouTube, and see how many people covered his songs and referenced him and his music.” Sam says as he begins to talk about his family ties. “I definitely rebelled in some ways. There wasn’t a tonne of music in my household, my dad had been playing shows since he was about eight years old. So he doesn’t typically listen to the radio or play records, or anything. He watches TV with the sound off half the time, and whistles in the car.”

As Sam went off to school, he threw himself into his studies, rebelling against the family tradition. “When you’re a kid, you just want to stand out in some way. If everybody in your family does one thing, if everybody’s a teacher, you’re like, I’m not teaching, I’m not going to college.” Sam laughs as he recalls the rebellious side of his younger self. “I think that it was something that I tried so hard to rebel against that it was always embedded in the back of my brain that really, I did want to do it, I just wanted to do it differently. I wanted to do it my own way, and not be kind of pigeon holed to do what other people think that I should. I definitely was into sports, I was into politics and I was just very studious for a long time so I think my parents thought I was going to go off to college and go into something in education, anything other than music, but I kind of blindsided them.”

As Sam began to get into music, it wasn’t the traditional country music his family was familiar with that inspired him, “I was influenced by top 40, radio and hip hop music, R&B music, all kinds of things, and soundtracks. So I took a lot of inspiration from everywhere. And it probably was like a little point for me to not be like the biggest country fan.” When he did turn to his family for inspiration, it was the music of his sister Holly that he found awe-inspiring. “Holly Williams, my sister, has been a huge inspiration to me. That album, ‘The Highway’, came out when I was in high school. That was definitely a time that I was probably primarily listening to like hip hop music but I love it so much. Those songs really impacted me a lot and posed the question to me like, what will I write songs about? What’s important to me that will free me in a way and connect to other people? She was signed to a major label early in her career and played lots and lots of shows in Europe and busked and did all kinds of really honourable stuff, and she has just really found her niche. So that was inspiring for me to see that it is doable without shooting into superstardom, that you can really be authentic and carry on the family name in a beautiful way.”

So that’s what Sam set about doing, finding his own niche, carving his own path with his songwriting. His new album ‘Glasshouse Children’ is an accumulation of years of trying to find the balance between honouring his Grandfather’s legacy whilst being seen and heard as an individual, for the person he is. He found a group of core writers that could help him to do that. “I didn’t write a song for this album with Lori McKenna but she is a songwriter and artist that I really adore and we wrote some songs together a few years ago. I wrote the title track with Dan Auerbach of The Black Keys. I work with a guy named Ben Roberts, he’s in an americana duo called Carolina Story. We wrote a couple songs together, Bullet Blues and The World Alone.”

The latter of which became Sam’s favourite song on the record, “The World Alone is just really special to me.” He continues, “It just feels a lot of times as an artist, you’re trying to figure out your message, your look, your sound. The World Alone just feels very unique to me and authentic. There’s just something about it, I want everyone to hear that song when they hear the album.”

The centrepiece of ‘Glasshouse Children’ is a song called Happy All The Time and it saw Sam team up with another living legend within the genre, the one and only Dolly Parton. “I worked with Mary Gauthier to write that song. She is amazing, she’s also hilarious.” He begins, “I have always been a humongous Dolly fan. My manager called me one day when I was making my son breakfast, and said, ‘We have to get Dolly on I’m Happy’. I focused my energy on that, we tried every business and professional avenue but nothing came of it. One of my close friends, a songwriter, is really close friends with one of her friends. She agreed to relay a message to her. So I wrote Dolly a letter. I just wrote ‘Hi, Miss Dolly’ on some thick parchment paper. I let her know how much of a fan I was, but it was more about my life and me, kind of introducing myself. I spoke about the song and what it meant to me, and just how validating it would be for her to sing on the record with me. She ended up loving the song, loving my voice, lyrics and message. She really only does things that she wants to do, that are in tune with her message. Even though we have very different backgrounds, and we’re a different age, there’s a common ground there. I’ve been holding on to the song for a long time and it kind of became like the cornerstone of ‘Glass House Children’.” With a smile upon his face Sam adds, “That’s my proudest moment so far. It happened in such an organic way and she by no means had to do that. It really let me know that she loves my voice and songwriting and coming from her, that is just so validating.”

As things were starting to fall into place for Sam, tragedy struck, decimating the Williams family. Sam’s sister, Katherine Williams, passed away in a terrible car accident leaving behind two young children. “I think that when you go through a traumatic tragedy, you latch on to something, and you can’t always control what that is.” An emotional Sam begins, “You can latch on to stuff that’s negative, you can latch on to pills, or alcohol or isolation. I was already so much into the process of working on an album and putting out an album when my sister passed away that it really threw me for a loop, it wrecked everything in my life for a very long time. But I couldn’t just give up on everything. I knew that’s not what she would want for me. She would want me to keep going regardless and to know that she’s proud of me and it’s worth it. So after a while, I came back and started working hard on the music again, and getting everything into place.”

Sam’s debut album came out at the end of August. It was his voice, his words as he tries to craft his own journey in life whilst honouring his family, both those who are present and those who have passed on. It’s a record Sam is proud of and rightly so but he has hopes and aspirations, not just for this record but the songs he continues to write with his friends and colleagues out in Nashville. “I would love to get a gold single in the next few years in my career, and to just do an amazing job of mixing genres, while still having really authentic songwriting.” But after the turbulent nature of the past year, Sam searches for something more profound, “Above all, I hope to achieve peace and happiness.”