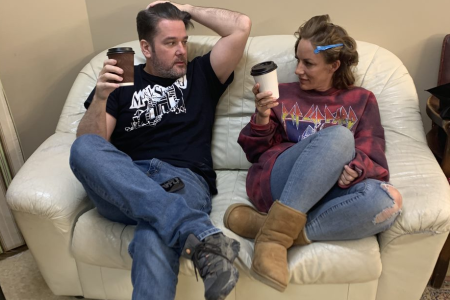 Conway Twitty and Loretta Lynn had successful careers both as solo artists and as duet partners. They first began releasing albums together in 1971 and were the best of friends. Their last album together came out in 1981 and Twitty passed away in 1993. But now the music of these two legends lives on through their grandchildren, Tayla Lynn and Tre Twitty as they perform the music of their grandparents and tour round the country as a duo delivering these classics just as Conway and Loretta did fifty years ago. Whilst getting her four children ready to go and see the new Elvis movie, Tayla takes some time out to chat to me about the influence Loretta has had on her life and career and what it means to both her and Tre to be able to keep their grandparents legacy alive in their shows.

“Growing up, Tre and I both talk about how unaware we were of our grandparents influence on country music,” Tayla begins, “I think we were both around the same age tweens – 12 or 13 years old, when we realised that our grandparents – I guess we knew they were singers, we knew what they did – but we were 12 or 13 before we looked at the crowds, looked at how people reacted to what they were doing.” Together, Twitty and Lynn senior won four CMA awards and a GRAMMY award.

The ‘Coal Miner’s Daughter’ singer, now aged 90, was not just a grandma to Lynn but a mentor as well. “As far as me navigating the industry and being taught their craft. I was a student, and she was my teacher. She’s the one that taught me everything about showmanship and the music business and how to treat your fans and how to just treat people in general. I mean, she was both a teacher of the craft, but she was also a teacher of how to be a woman and a friend,” Tayla gushes, the love and respect audible in her voice. For Tre though, his grandfather died when he was still just a kid and hasn’t had that same one to one guidance that Tayla did but he still found a way to learn off Conway as Tayla explains. “For Tre, I don’t think he had the opportunity to get many lessons from Conway himself, because he passed away when Tre was 16. But he does watch every interview and talk with his family all the time. And I believe that he’s learned a lot of lessons that way.”

Although Loretta and Conway were close, Tre and Tayla didn’t really grow up together and instead found their connection later on in life. “We started making music together about five years ago, I heard Tre sing on one of my grandmother’s shows that she does every year at our dude ranch. It’s called Remembering Conway. And when I heard Tre sing for the first time, there was something very sort of ‘written in the stars’ about it, I just knew that we were supposed to sing together. And from the first show, it was easy. It’s always been easy singing together, I think we both feel like we are meant to be a duo and sing these songs for a long time.”

The live shows that Tre and Tayla put together are not just about playing the music of Conway and Loretta but telling their stories as well both the professional anecdotes and from a personal perspective too. “My mind wanders all the time on stage, I am not focused at all,” Tayla laughs, “But Tre is, he is laser focused on what he’s saying or what he’s doing. He’s got a great skill where he can memorise a story and tell it verbatim over and over with so much excitement, you would never know it’s memorised, you would think it was off the cuff. I can’t remember anything. And I can barely finish a sentence so I’m glad to be in a duo where somebody can do that!”

Tayla is very open and honest on social media about her previous struggles with addiction but her MeeMaw, as she calls her, and her music has helped her overcome each and every struggle. “For me, her music was a lifeline to me as a granddaughter to a grandmother. It has also been a beacon of light for me as a recovering addict and alcoholic. Seeing her rags to riches story, seeing what she did, seeing what she went through, how she crawled her way to the top. I never thought it was unattainable because she showed me how to do it.” And through the most devastating loss, still Loretta and her music has been a rock for Tayla to lean on. “My mum died four years ago, July 8th. The July 4th concert is the one called Remembering Conway that Tre and I met at, that is where we became a duo. The first year we ever did it officially was 2018 and my mother drove home from that concert that night and had a heart attack an hour later and passed away.”

For Tayla, there are so many emotions connected with this yearly concert that they put on, “This concert made us a duo, I lost my mum, MeeMaw handed the reins down to us, it’s about Conway passing away and being her best friend and her remembering him for years. It’s how I met Tre. And this year on July 8th is when we’ll be releasing our first music video too. This is the music that Tre’s mama and my mama grew up listening to. So it has sealed us in that way because of our raising as well, it takes us back to our childhoods. And it is how we connected with our grandparents.”

The Twitty and Lynn project isn’t Tayla’s first foray into the music business though. In 2007, Tayla was a part of a trio formed for a reality TV show called ‘All In The Gene’s’. She was placed with Caroline Cutbirth, a descendant of Daniel Boone and Jennifer Wayne, John Wayne’s granddaughter who later found fame with Runaway June. The show never came to fruition but the girls continued to perform together for some time. “My trio, Stealing Angels was what threw me into a different type of music business. I was very blessed to have started out in the show business with somebody like Loretta Lynn, but to get into the song writing as a business, having a publishing deal, having a record deal. Having my own bus. All of that was with my trio, we are sisters, soul sisters, and we created something for years that taught me how to do what Tre and I are doing now. We beat the pavement, we wrote every day in writing rooms up and down Music Row. We pushed ourselves to exhaustion, to just create music. That experience was hard and it was beautiful at the same time,” she reflects.

But in chasing that dream she realised that although she wanted to play music, it wasn’t quite the dream she had imagined but it helped her to find where she truly belonged, “Since then, just realising at that point, instead of chasing radio stardom to be at the top of the charts, I wanted to have a family and now this has been a blessing with Twitty and Lynn, because I can have a family, we can make our own schedules and we get to do the music we love and it’s just so easy to sing. I don’t know that I was ever meant for the radio tour world. It is grueling and hats off to people that can do that and keep their sanity – it takes a very special type of person.”

Earlier this year, to celebrate Loretta Lynn’s 90th Birthday, Tre Twitty and Tayla Lynn got to make their Grand Ole Opry debut. “Making our Opry debut for me was, I do not say this lightly, was a spiritual experience. If this is it, I’ve made it, I’ve done what it is I set out to do as a little girl. Standing in that circle, singing her songs with her photo enlarged behind me was everything and more I could have ever dreamed of for myself as an artist. Being able to sing Conway and Loretta songs out there with my partner and one of my very best friends, Tre was sort of that moment of okay, what we are doing means something to people.” And from that pinnacle moment Tre and Tayla are now on the brink of releasing their first album together. “Our record should be out this summer, it takes forever to make a record,” She laughs. “We will be doing mostly Conway and Loretta music, MeeMaw says we don’t need to worry about putting a bunch of our own music out there right now. She says the fans are there to hear our music so you better keep it going. We listened to the Queen!”

For the young duo, telling their grandparents stories, punctuated with songs is the most important thing to them. Twitty and Lynn senior helped to shape what country music is today. Loretta paved the way for women in the genre, giving them a voice and raising taboo topics in song that helped change the narrative for women. “Keeping their legacy alive is the most important thing that we do. It is our goal, it is our passion. At the end of the day, we are huge fans of our grandparents as both artists and as people. And so it’s important to us that we not only share their music, but we share their story as a duo. And we share their stories as who they are as human beings.” This unique show rolls on through the States, and next year, they hope to take it to an international stage. “We would adore coming to England. We would love it. I know we have some plans to go to Italy next June but I mean it’s my dream to come to London. Can you get us there?” She concludes with a laugh. For now, though, we keep an eye on their website for news of that album.