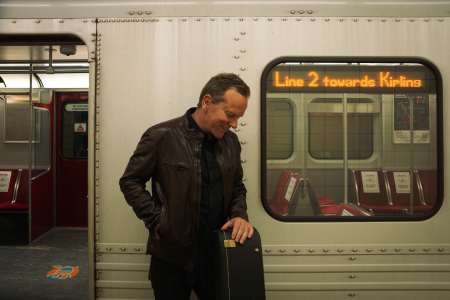 As I sit at home in Manchester, the rain tapping on the window outside, I dial in world renowned actor and musician, Kiefer Sutherland who has found a gap in his very busy schedule to talk to me about his third studio album, ‘Bloor Street’. “That’s one of our favourite places to play in the world, I couldn’t explain to you the reason,” Sutherland says as we begin making small talk about our locations and the weather, “The shows that we’ve had in Manchester, the audience has just been absolutely extraordinary. At first you think, it was a good night, but then when five or six shows in a row, are like that you think, no, it’s Manchester!”

Heart on your sleeve

I’ve had the pleasure of seeing Sutherland perform on a number of occasions, primarily at festivals such as Black Deer and SummerTyne Americana and each time he never fails to impress. He walks out, oozing confidence, a glass of whiskey raised above his head. “It’s very funny, before we started touring, I was like, that’s gonna be my ace in the hole, having that acting and performing experience,” he begins, “I was completely wrong. I’ve been on Broadway, I’ve worked at the Royal Alex and so many things are similar; you’re standing on stage, there’s an audience there, you’re going to communicate this idea. The one thing that I hadn’t counted on, which is dynamically different, is I wrote these songs and they’re personal and they’re from my own life. The idea that I would play a song and then talk to you about why I wrote the song, I wouldn’t tell that to an interviewer, let alone a stranger in an audience. So it took me a minute to realise that if I was going to do a show properly, I was going to have to be really honest about this. I couldn’t hide behind a character.”

For Sutherland, though it was hard to get into that mindset, he fell in love with touring and the connection live music generates between us as human beings. “The truth is, I ended up falling in love with touring, and I ended up falling in love with playing with a good band, I’ve had the same band for all these years and and I’ve enjoyed that immensely. When you’re doing a live show, you can figure out how to find all of the things that you might have in common and you realise that we’re a lot closer than you think. Bruce Springsteen, he sold out Broadway for two or three years till the pandemic came. He was playing shows exactly like that, where it’s like, Oh, my God, I didn’t know Bruce Springsteen had to go through something like that. You feel a connection to someone because you realise that you’re not alone in something, you feel like you belong and that’s a really nice feeling.”

Read the full interview in the latest issue of Maverick Magazine available HERE!