Lauren Jenkins: Rising Out The Ashes 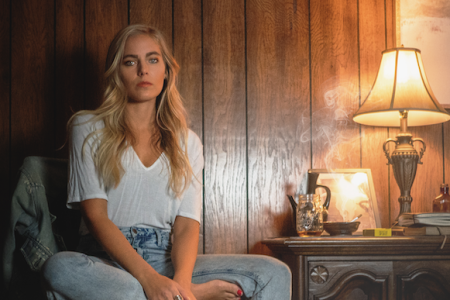 The music industry took a hit in 2020 but not many musicians had it quite as tough as Lauren Jenkins who is now giving the term strong, independent woman a whole new meaning!

2020 started out magical for Lauren Jenkins who was living out her dreams touring Europe with Brett Eldredge. But just a few months later things went south, a tornado tore through Nashville and as the city she called home came out of hiding to inspect the damage, Jenkins record label dropped her. This was then followed by the pandemic which gripped the world. Jenkins, undeterred by the challenges she faced began doing everything she could to build her career from home as an independent artist.

“The beginning of the year was so magical, for it to completely flip flop was challenging but at the same time as humans we adapt and figure out how to keep going.” Jenkins begins as she thinks back. Though she’d had a tough time she didn’t sit around feeling sorry for herself but jumped straight back on the horse. “I released ‘Ain’t That Hard’ right after I left the label. Everything seemed so uncertain and that song helped remind me that I’m not the only one going through stuff, we all are, across the world.” It would become a timely piece of art as the world went into lockdown. Jenkins found comfort in music “Music has always given me energy and passion, it’s filled my life. Doing the live streams and making my dining room into a merch store, sitting at home and learning how to connect with people and write music, all of that’s been really beautiful. the creative process has been some of the most fulfilling of my life.”
“I have freedom to write the song I want to write and record them the way I want to with the people I want to.” Jenkins shares with a smile “I’ve been working with a lot of my friends, we started at the beginning of the pandemic and we had to wear masks and there was a lot of distance between us. I would just wave to my drummer through glass but it was still really special. Right before things got really bad, we were able to track the songs in a room together which is the throwback way of doing records, but there’s something magical about having everyone in the room together.” Jenkins is working on a record which she will release in three parts, “I’m doing it this way as it gives people time to digest the first part and secondly right now we need music so I didn’t want to wait for the full record to come out, I wanted people to have music to listen to now.”
The first single she shared, Like You Found Me, which Jenkins co-wrote with Blake Chaffin and co-produced with Gabriel and Gideon Klein, has a lot of the beautiful traits that made us fall in love with Lauren Jenkins on ‘No Saint’ – the detailed lyrics, those unique vocals – but Jenkins has a fearlessness about her delivery. That’s probably testament to how she’s handled the past 13 months. “The song is basically saying, I’m fine on my own, you’re welcome to come into my world but don’t mess everything up. Leave everything how you found it” Jenkins shares.
Jenkins has learnt how to adapt and is working hard to pull together everything she needs to succeed as an independent artist but she’s having fun along the way. “My friend Brooke Stevens did a covid safe music video, we’re the only two crew members. We had to try and figure out how to shoot a video in the middle of a pandemic” she laughs. She’s gearing up to get back out on the road though, “I just want to play all the shows, any show, I’m vaccinated now so I’m ready to play anywhere and everywhere!”

“You’re told no a lot in this industry so if you’re in it to be told yes then you need to pick a different career. The rejection can sting for a second but my driving force has always been about connecting with people and telling a story.”