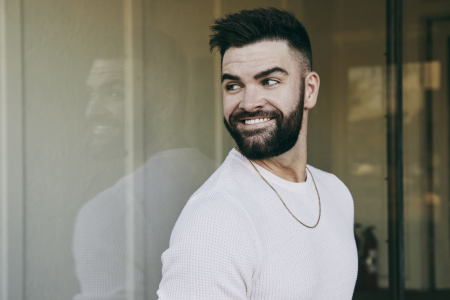 Dylan Scott’s latest album, ‘Livin My Best Life’ due out August 5th, is his best to date. Breaking out onto the scene in 2013, Scott got his first number one three years later with his song ‘My Girl’ written about his childhood sweetheart who is now his wife. After a series of EPs including a tribute to Keith Whitley, Scott is now back with a full length album featuring some of the best songs he’s ever written alongside cuts by some of Nashville’s finest writers such as Thomas Rhett and HARDY. He sits down with me as he talks about his journey and how his musical life and family life have both changed over the past few years.

Inspired by his Father, Scott began playing music when he was just a kid and never really developed a plan B. “I never knew that I wanted to be anything else, let’s put it that way. My dad was in the music business back in the day, wanted to be an artist and played on the road, guitar with some older guys in the country world. Being around that and hearing stories, when you’re a kid, you want to be your dad, then you grow into what you want to be. I never really grew out of that. It’s like, hey, my dad was a country music artist, I’m gonna do that too.”

They listened to all kinds of music growing up, country radio was a big part of his upbringing but his parents had an eclectic taste which included hip hop, pop and r&b. He was not a fan of rock music but had to learn to love it when he met his wife, Blair, who is a big fan. Now, with two small children in the house, he has come to appreciate a different kind of music; “Yes, we listen to some baby shark, some coco melon. But you know what, it’s not as bad as what everybody makes it out to be. You catch yourself, here I am 31 years old singing Baby shark!” He laughs.

Back in 2019, Scott released an EP in tribute to one of his heroes Keith Whitley called ‘An Old Memory’ which featured country star, Lorrie Morgan, Whitley’s widow. Having grown up listening to Whitley, it was a great honour for Scott. “Keith Whitley, like many artists, is my hero, he’s the guy that I used to sit on the end of my bed and learn guitar to his music,” he fondly reflects. “We sat down and talked about this, like wouldn’t it be really cool to go in and remake some of his music. I want to keep his legacy alive a little bit. Maybe people that listen to my music have never heard of him. Now, they’ll hear of Keith Whitley, because of that record. It was really fun to make and you bring Lorrie up, Lorrie was so awesome, to come in and do a duet with me on the song ‘Tell Lorrie I Love Her’. It was special and it’s one of those things I’ll never forget.”

For as magical as the record was, this latest offering allows Scott to shine as a writer as well as an artist. ‘Boy I Was Back Then’ is a self penned admission and understanding of regrettable actions and how they go on to shape us. Scott reflects, “I sat down one night by myself and that chorus just came out,” he begins. “I think as a guy, we’ve all been there, whether you want to admit it or not. At least once in your life, whether you’re proud of it or not. In my situation, not too proud of it. But, you go through life, and you go through all these hard things to get to a good moment in your life and that’s kind of what the song is about. I was a boy back then, I’m a man now and I will stand up for that. And if I was not that boy back then I would not be this man that I am now. But thank God, I’m this man now I’m with you.” The gratitude even for your mistakes shows a level maturity that perhaps was not in his previous work.

He also joins with Jimmie Allen for the song ‘In Our Blood’, “Jimmie and I, we’ve been friends for several years now,” he begins thoughtfully. “I just knew when this song was sent to me, it was such a special song. It stands for everything that I believe in, it doesn’t matter whether you are red, yellow, black or white. It don’t matter. At the end of the day, we’re all humans, and we all bleed red. I’ve known Jimmie for years and I sent it to him and I said, what do you think about this song? He said, Man, I love this. I said, Do you want to hop on it with me? He said, Absolutely. And it was delivered that easy. I just wanted everybody to listen to it and understand it and, hopefully, feel the same way I felt about it.”

His latest single, ‘Amen To That’ is causing a buzz stateside and Scott is hoping people continue to connect with it and propel it up the charts. “I have a strong faith background, I grew up in church, and it’s just right through my beliefs. I think what was really cool with that song is, it’s a love song. But it’s got some nuances like, ‘hallelujah, praise the good Lord for giving me that woman I’ve been praying for’. It just represents who I am as a person, it’s a cool, upbeat, edgy, love song. I’ve loved it from the first day I heard it, which was a while back. I’ve had that song now for a couple of years and I still love it as much as I did the first day.”

For Scott though, his main priority is his family, but where the two meet, music and family, is where Scott finds his proudest moments – side stage. “Aside from the music business, my proudest moment is honestly being a daddy to my little boy and my little girl. But in the music business, one of my proudest moments is probably when my kids get to come to a concert and they’re side stage and they’re watching. You can see them dancing and smiling. That’s something that never clicked in my brain growing up, I wanted to be a country artist, I wanted to do this and do that but I never thought, I’m gonna have my kids side stage watching me and it’s gonna be a proud moment for me. But honestly, that’s one of the proudest moments is just having my kids enjoying what I do, understanding what I do and having a good time with dad while he does his job.”

Scott’s latest album is due out August 5th and his single ‘Amen To That’ is available everywhere.