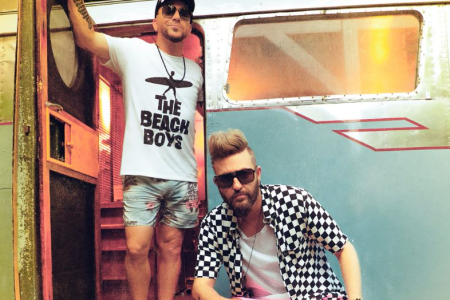 LOCASH are about to make their UK debut as they play The Long Road Festival in August. With their current single ‘Beach Boys’ performing well on the charts, the duo, made up of Chris Lucas and Preston Brust joined me over zoom from Nashville to tell me all about what they’ve been up to and get some tourist tips for their trip!

The pair formed in 2004 after meeting at The Wild Horse Saloon in Nashville, Tennessee. Though they had different upbringings, they had one thing in common – they loved harmonies. “I was an athlete, so I played baseball and football, all my life,” Chris reflects. “But during that time, my mum and my uncles, they were always sitting around the house and I would always end up getting my cousins together and putting a show on for the family at Christmas time. But I think after I’d ripped my knee in baseball for like, the third time in college, I decided. Some guy was at a karaoke bar, and I sang a song and the guy said, you should go audition for this thing in Kings Dominion, it pays like 800 a week. So I did that and I fell in love with it.”

Preston’s love of music was first established in church meanwhile. “I grew up in church, my dad, he’s a preacher. So I was always learning acapella music in church. I was learning harmonies growing up and putting them to gospel songs. I was singing the bass part, some guys would sing the tenor part, then you’d have the girls singing altos and sopranos. You’d have these four part harmonies, and it was always really interesting to me how you can stack voices like that and create a sound. As I got older, I was writing songs in high school and in the choir. I was in Glee before Glee was popular. I came down to Nashville to be a songwriter, but I met Chris, and we hit it right off.”

That first chance meeting in the Wild Horse Saloon involved no singing though, it was just the comedic personalities of the pair, bouncing and bantering off each other that kept their first audience gripped. “We weren’t even singing at the time, we were just hanging out at the wild horse,” Chris recalls “We both went out on microphones one time together, just to entertain a crowd, without even singing. We had the banter back and forth, it just worked. So we knew something was going on. In Nashville, everybody’s a singer. So you don’t ask. We finally found out, he was a singer, and I’m a singer and we just started working on harmonies together. I’m introducing him to more secular music. He’s introduced me to these gospel harmonies, and it worked together but I think we knew something was really going on the first time we hit those microphones.”

Shortly after beginning to sing together, they also started to write but their first real taste of success came from songs that ended up being cut by other artists, namely Keith Urban and Tim McGraw. ‘You Gonna Fly’ was released by Urban in 2011 and topped the country charts the following year. The duo wrote it with Jaren Johnston of The Cadillac Three and Chris picks up the story. “We actually wrote it for LOCASH. ‘You Gonna Fly’ was one of the first songs we wrote when we signed with our first publishing company. We were actually trying to get a song on Jaren Johnston from Cadillac Three, his album, and he was trying to get on our album. So we’re both writing for each other and somehow created a Keith Urban baby,” he laughs.

Their second taste of success as songwriters came a year later as Tim McGraw released ‘Truck Yeah’ in 2012. Written with Chris Janson and Danny Myrick the song broke into the top ten of the country airplay chart and is often still a staple of McGraw’s live shows. “The song for Tim McGraw, we were writing that for us too. I remember one of us, Preston, I think said if McGraw doesn’t cut this we’ll cut it, as a joke. We didn’t even know it was gonna get to McGraw but thank God it did, because he crushed it for us.”

Their first number one as a duo came in 2016 when ‘I Know Somebody’ rose to the top of the airplay charts. “It was the the pinnacle of what we had been working for for so many years,” Preston begins. “‘I Love This Life’ had gone all the way to the top of the chart, and it was sitting at number two, and we had a shot at pushing forward to try to go for number one, but our record team was like, why don’t we just back off and take the number two and walk away and we’ll come back strong for the next song.” As frustrating as that was for the boys they took the label’s advice and the gamble paid off, “Part of you is like no, we’ve worked too hard to get here, but the other part of us had so much respect for country radio, we’re like, they’ve got us to number two, let’s walk away and we’ll come back with ‘I Know Somebody’. So we released that and then it took us another year to get to the top of the chart and so it was a long gamble to walk away but it was extra special because it was great to finally get to the top of the chart with ‘I Know Somebody’ and feel that top of the mountain feeling.”

Their latest single sees the pair team up with Mike Love and Bruce Johnston of The Beach Boys for their song called ‘Beach Boys’. It’s an unlikely collaboration in a lot of ways but their love of harmonies ties them together. Preston reflects on how it all came about. “We wrote the song on Zoom during the pandemic, and there was four of us. We wrote the song called ‘Beach Boys’, and we wanted it to have like, Beach Boys style harmonies. We leaned into the song, ‘I Get Around’ a little bit because we’re like, let’s put a heavy influence of Beach Boys in here and we turned it into a drinking song. We had to get it approved by Brian and Mike of The Beach Boys because they wrote ‘I Get Around’. So we sent off to have it approved by them which took a few months. We finally got a phone call from Mike Love and he said that they approved it. They loved it. They wanted to play it in their shows. And they also wanted to be on the song with us. So it just was this dream come true to have two guys who moved to Nashville so many years before and struggled and lived out of our cars and then have the Beach Boys want to be on a song with us. It was just the coolest feeling.”

Preston and Chris returned the favour by providing The beach Boys with a cool moment of their own – making their Grand Ole Opry debut. Chris continues the story, “That was amazing. We’ve played the Opry so many times, but the Beach Boys in 60 years have never played the Grand Ole Opry. So that was their debut. We brought them to the Opry to experience that. They were fantastic to work with, it was pretty surreal. They said maybe they should retire after that because it’s big. They’ve played everywhere in the world. It was pretty surreal moment and knowing it all came from an idea for a song.”

Now as they continue to make waves across the States, Chris and Preston look forward to arriving in England to try and make waves here too. The Long Road will be their first UK appearance but it’s something they have dreamed of for a long time. “Chris and I have wanted to come over there since the beginning of our career, but it was always so expensive for us to you know, make sense of all of it,” Preston confirms. “Finally, we have this opportunity with the Long Road and so we’re coming a little bit early because we’re excited and we’re going to spend a week there and line up some meetings because it’s important to us, we don’t want to just come in and do a show and leave and hope that you know we make our mark, we want to come over there and really get to know some folks and sit down break some bread and and see if we can establish a home away from home for LOCASH in the UK.”

The UK crowd seem just as excited as Chris and Preston to welcome the boys and The Long Road will be the perfect backdrop for their debut performance.