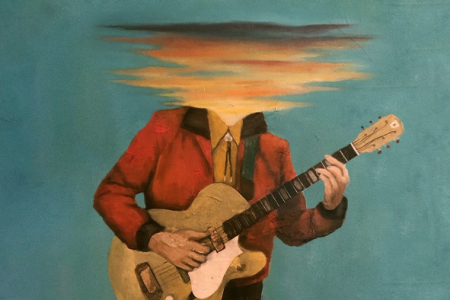 Lord Huron, inspired by their haunted and mysterious studio, have created a nostalgic tribute to the unknown musicians that went before them on ‘Long Lost’

Lord Huron’s latest project is quite unique in more ways than one. The stories they have crafted on ‘Long Lost’ are not their own but that of the great musicians that may or may not have graced the studio before them. The group who have been performing together since they were in school acquired Whispering Pines Studio a few years ago and ever since, the place has inspired and captivated the band which has culminated in this latest project.

“Since we moved in there we’ve been trying to discover the history behind it” lead singer and guitarist, Ben Schneider begins. “We know it was built in the 70s and was used for a while but then it was abandoned for about 20 years before we got hold of it so it’s a bit of a mystery. It’s got a certain vibe to it, the decor is still from around the time that it was built.” Lord Huron began sharing snippets of the new album with monthly live streams called ‘Alive From Whispering Pines’ which featured audiovisual teasers of what was to come on the album. They reimagined Whispering Pines as an old broadcast studio and introduced us to station chief Tubbs Tarbell. “The studio feels haunted, when we were working at night, strange things would happen, or strange noises would appear on our recordings so we’ve always felt like there were friendly ghosts there. We came up with these characters that we imagined had come through there and the stories of their lives.”

It was a cathartic and rather freeing process for Ben and opened up a world of possibilities as they begun to dive deeper into the characters they had created; “I always find it useful when I’m writing music to invent characters or avatars to channel through, as a way of writing from a different perspective instead of it always being my experiences as I have a limited scope on the world. We wanted to channel these ghosts and write the album from their perspective with the goal of creating what sounds like a long lost masterpiece. Some album from another dimension, that sounds familiar but you can’t quite put your finger on it, it’s nostalgic.” Once the characters and the stories were formed, the sonics and vibe could be built around that. “I knew the things I wanted to write about and tailored the sonics to help bolster those stories. I had the vibe in mind and then set out to create it the best I could musically. We wanted it to sound cohesive, like it was from the same era. We could employ those same recording techniques they used in times gone by, we could use the same instruments and equipment they used in those older recordings that we love.”

One song in particular I Lied took great influence from the great country legends of times gone by and employed that traditional sound. “I had in mind the great country duets of the sixties and seventies, thinking about Loretta Lynn and Conway Twitty, George Jones and Tammy Wynette.” Ben begins, “I knew I wanted it to be a dialogue between two people at the end of a relationship and I was interested in finding the right voice for that. My friend introduced me to Alison who hadn’t put any music out at the time but had done a few recordings. I really liked her voice, it suited the song well so we got together and recorded it.”

‘Long Lost’ is one of the most intriguing albums to be released this year. It transports you to a different world, one perhaps that is make believe, however it feels so real. The imagination and experimentation exhibited by Lord Huron on this record is unrivalled and makes it a standout record for the band and for the genre as a whole.